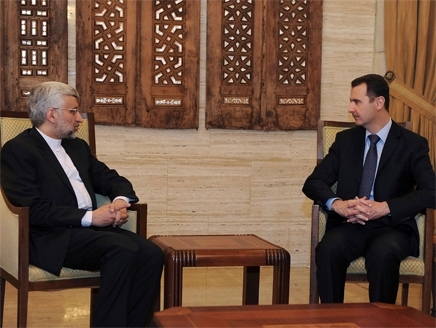 Saeed Jalili, Secretary of Iran's Supreme National Security Council, today told reporters in Damascus that Israel would regret its air strike against Syria last week. Jalili is visiting Syria and met with Syrian President Bashar al-Assad on Sunday. Jalili did not say if Iran or its regional allies were planning any military response to the Israeli attack.

“Just as it regretted its aggressions after the 33-day, 22-day and eight-day wars, today the Zionist entity will regret the aggression it launched against Syria,” Jalili said, referring to past wars between Israel and Hezbollah and Hamas. (AP, 4 February)
“The Islamic world will not allow aggression against Syria,” Jalili added. “Syria stands on the front line of the Islamic world against the Zionist regime (Israel) ... The Islamic world must show due reaction to the Israeli aggression.”
Jalili also said Iran supports any initiative for dialogue between President Bashar Assad and his opponents to end the civil war in Syria. Iran’s foreign minister held talks over the weekend with the leader of the Syrian opposition at the sidelines of the Munich Security Conference. Jalili was in Damascus to brief the Syrian president on those talks.
“We've said from the start of the Syrian crisis that the only thing that can help resolve the crisis is national dialogue in Syria,” Jalili said.
Photo credit: Saeed Jalili, Secretary of Iran's Supreme National Security Council (L) with Syrian President Bashar al-Assad. Damascus, 3 February 2013. (SANA/AP)