‘A Victory for People of Iran’ – Mashreq News 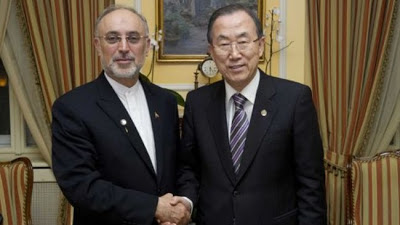 “We are ready to take measures to remove the nuclear concerns [over] our country via mutually agreed international means (between Iran and the West); however, the recognition of our [nuclear] rights by the opposite side will be paramount,” Salehi said. (IRNA/Press TV, 28 February)

Salehi made the remarks in a meeting with UN Secretary General Ban Ki-moon on the sidelines of the UN Alliance of Civilizations (UNAOC) Global Forum in Vienna on Wednesday.

Iran has hailed the new P5+1 offer presented during the talks in Almaty. The conservative Mashreq news called the offer “a victory for the people of Iran.” (mashreqnews, 28 February). Such declarations by conservative factions of the Islamic Republic are needed to pave the way for any future compromise with the West.

The P5+1 offer will reportedly call for the stoppage of the country’s 20-percent enrichment program. It allows Iran to keep limited amounts of its current inventory of 20-percent enriched fuel for use at Tehran’s research reactor. It does not require Iran to close Fordo underground enrichment facility, but allows it to enrich uranium at the facility at 3.5 percent purity only under the IAEA watch.

Meanwhile, Chinese Deputy Foreign Minister Ma Zhaoxu urged Iran and the P5+1 to maintain their negotiations process, saying that the two sides made “tangible progress” in their latest round of talks in Almaty.

“We could say that this round of talks have brought about tangible progress on the negotiation over Iran's nuclear issue, which is beneficial to settling the dispute through dialogue,” said Ma, who heads the Chinese delegation in the talks between Iran and the P5+1.

Empty and self delusional.
What victory?

"The P5+1 offer will reportedly calls for the stoppage of the country’s 20-percent enrichment program. It allows Iran to keep limited amounts of its current inventory of 20-percent enriched fuel for use at Tehran’s research reactor. It does not require Iran to close Fordo underground enrichment facility, but allows it to enrich uranium at the facility at 3.5 percent purity only under the IAEA watch."

Nader, Fordo is already under IAEA supervision. The 20 percent LEU is directly tied to nuclear fuel.

The entire crux of this issue is Iran's right to the nuclear fuel cycle. If this right of sovereignty is finally to be accepted by the U.S., then this is no mere "declaration" of victory needed by a conservative faction of Iran's political establishment, it is certainly a victory for the entire country.

But the nuclear agreement has yet to actually materialize. It has always been about a U.S. diktat. If the U.S. is ready to accept a compromise, then such an agreement has a chance. But this is certainly not about Iran making a compromise; they've made numerous compromise offers in the past, to which the U.S. has refused to accept. And the Iranians will not surrender their right to the nuclear fuel cycle. That is an unrealistic expectation.

Let's continue to hope, though, for an agreement. It's mostly all on the Obama administration, not the Islamic Republic of Iran.

By the way, I suggest you read the Leverett's post "The Coming Collapse of Iran Sanctions". In a previous comment made here I mentioned China's potential response to upcoming U.S. sanctions, and the Leverett's have provided a detailed analysis on the subject. Well woth the read.

Leverett wants to lure Iran to self-destructive behaviour - no reason to trust him.

Fordo is exclusively producing 20-percent enriched uranium. Under the agreement, it has to switch to 3.5-percent enrichment only. Iran will keep small amounts of its current inventory of 20-percent enriched fuel, but will ship the rest abroad. I believe that’s a good compromise, a win-win situation, both sides win. Iran can claim that its right to enrich uranium has been formally recognized, and the West is assured by Iran that after the agreement goes into effect uranium will not be enriched at grades higher than 3.5 percent. And that’s precisely why I believe the two sides will strike the compromise in near future, resulting in lessening of tensions bilaterally and region-wide and the easing of economic woes in Iran. You always need such win-win situations to reach political compromise.

On Mashreq News, I am glad they characterized the outcome of Almaty talks as a victory only for Iran. This characterization by ultraconservative media will make the future compromise that much easier. The important thing, however, is to hope that political developments inside Iran in the next couple of months do not derail the tacit agreement reached in Almaty.

Hello, I'm Mark Confuz and if I keep repeating that the Leveretts say that the Iranian regime is popular and stable and powerful when in fact it's none of these things, maybe I'll get some other folks confuzed

I am becoming more sceptical. Did you remember the last time the Regime has made a rational decision ?

Under "the plan"
1. The entire "dual track" infrastructure remains intact... throttled back, but intact
2. Both sides will claim victory.

Tehran wins... they can always pull a North Korea later and say 'get out'.
... also, "Stop all enrichment" is now "ok, full fuel cycle and all capabilities" subject to inspection.

This was the Hans Blix formula for success in N Korea.

... ok, bring the carriers home, no point in floating around looking stupid.

The West is so stupid or so afraid of Israel that they make totally insane decisions.
I remember this debate when Iran was ASKING to be SOLD 20% enriched Uranium...at that time USA and co. were insisting 'no one centrifuge should spin' Iran went ahead and produced its own 20% now, they are negotiating on 20%! Damn fools. Why did not they accept Iran's rights in the first place and restrict it to 3.5%? Soon, Iran, rightfully, will want to be sold 60% enriched for its newly built submarines. I can say exactly what the West would respond and what the Iranians would do. Then there will negotiations on 80% enrichment.....! Damn fools and puppets.

Soft wealthy ideological politically ambitious servile appeasement front has arrived to usurp power...and GOP is weakened, afraid now to challenge as electorate will not listen to reason, only "what can you do for me ?"... Khrushchev stood against a generation of "ask not what your country can do for you- ask what you can do for your country - JFK" to now this (which also says something about the "dumbed down" materialist entertain me US electorate), if Russia ever had a chance it will be during next ~5 years. Ironic, (or by plan) Putin returns right on time. Friends darkly joke that USA should learn Chinese, possibly Russian better.

No need to "bury" US..., collapsing from within. (operation mind crime)