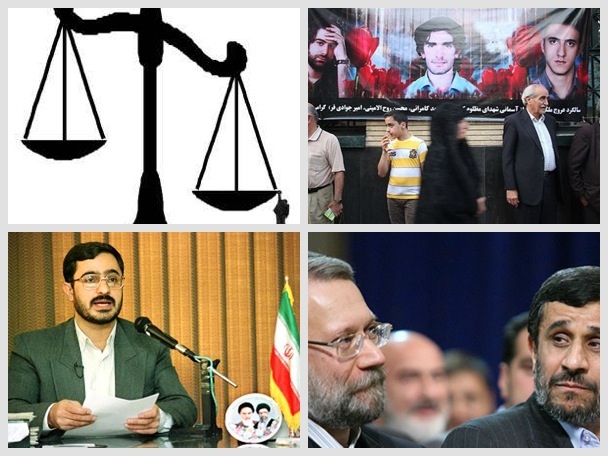 
Four years after the events in Kahrizak prison (1), the chief prosecutor at the time, Mr. Saeed Mortazavi, will be tried in public on Feb 26 in Tehran, according to Mohsen Eftekhari, the head of the Tehran criminal court (2,3).

Mr. Mortazavi is accused of having a major role in the imprisonment, torture, and death of at least three students detained in the post election revolt of 2009. He is now in the Ahmadinejad camp.

Mr. Ahmadinejad appointed him to head the social security fund despite the objections of the Majlis (parliament). He also featured prominently in the recent Ahmadinjead-Larijani row as the person who taped Larijani"s brother engaging in corrupt deal making.

Mr. Mortazavi was arrested three weeks ago and was released within 24 hours. Considering how little influence Ahmadinjead has over the judiciary (Run by yet another Larijani), that release was not done under pressure, but rather a conscious decision by the Larijanis.

It would appear that the anti-Ahmadinejad camp has decided that instead of trying Mortazavi on corruption charges involving the Larjanis, it would be easier to try him on criminal charges related to events from four years ago. The rare public trial would also give the regime an opportunity to evade responsibility for the 2009 protestors deaths, and pin the Kahrizak torture and killing of the three students on Mortazavi and his "accomplices".

The appearance of "justice being done" is just a cover for political revenge in this case, as most already know that Mortazavi's real "accomplice" in the Kahrizak crimes was the IR itself.

For four years, the Iranian regime had rewarded Mr. Mortazavi for doing its dirty work by appointing him to high level positions; the Iranian "justice system" only sprung to action when Mortazavi picked the wrong side in the latest political infighting.

He is just an excuse the regime should be put trial.

"The appearance of "justice being done" is just a cover for political revenge in this case, as most already know that Mortazavi's real "accomplice" in the Kahrizak crimes was the IR itself."

Any actual evidence to support this contention, Jabbar?

If the evidence landed on your head you wouldn't notice it.That's how blinkered you are.