Two Charged In Germany For Smuggling UAV Engines To Iran 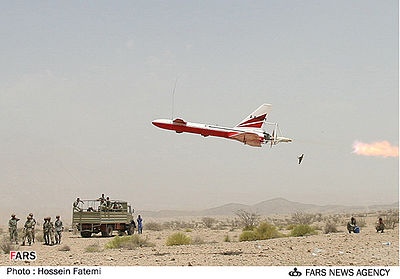 The German federal prosecutors charged an Iranian and a Iranian-German for smuggling UAV engines to Iran.

The engines were for the wildly used Iranian Ababil III UAVs; the downed Iranian UAV over Iraq in 2009 is believed to be of this type and model.

"The Ababil III is believed to have a maximum range of about 145 kilometers (90 miles) and can fly up to 4,300 meters (14,000 feet) high. It is primarily designed for surveillance and intelligence-gathering, although German prosecutors said it can also be used as an attack drone."(1)

This story brings into light the Iranian dependence on the outside world for critical components of military equipment.

They can make tanks, but they can't build reliable Iranian made tank engines.

They can make UAVs, but they need to have them fitted with smuggled German engines.

Iranian industry has been plagued by such "built in dependence" since the first Paykan was built in Iran based on a British design. Everything in the Paykan was Iranian except that engine.

Funny isn't it? And then they go and say it was completely built in Iran.
They are just full of shit!

Fazeli there is an interesting article in the UK Guardian about Iran's imports from China which is causing some problems among the locals.

This is not usual as only a handful of nations can produce turbojet or miniaturized solid fuel engines. Even India, China and Brazil are not there yet. In all fairness, Iran is making good progress and will get there eventually in a few years. It also shows the true nationalism of most Iranian expats who would go to any length to make Iran strong.

True.
Iran is actually having problems with their Quran imports from china as they appear to have typos.
http://www.guardian.co.uk/world/2011/sep/01/china-iran-quran-errors

While the Iranians don't have the industrial base to manufacture diesel powerplants for AFVs, they do have the capacity to build Toloue mini-jet engines which are copies of the French Microturbo TRI 60.

So, as with most Western MSM and Iran sourced media, accuracy in defense reporting should always be looked upon critically.

-IT is true! but the authorities are advising people to buy Iranian COPIES !people are going for the Chinese ones due to the low price compared to the locally printed!.-i think the high price on the IRANIAN printed ones is due to scarcity of paper and the restrictions and challenges in the paper industry -thanks to the sanctions!.
But the problem has been sorted out and the guardian report came too late in the day!.

-A NORMAL TREND that rises no eyebrows!

reply one-
stealing technology,comparing notes,espionage,buying technology and even sabotaging your enemy's project is just a normal trend in the military world!the fact that Iran gets some engines from Germany through its PATRIOTIC sons does not mean that they have totally nothing of their own !.it is estimated that IRAN has around 30 different types of UAVS[all of which have been mass produced] IN DIFFERENT MODELS AND RANGE! .can anyone frame us here that all these engines were stolen from GERMAN!-

reply two-it common knowledge that CHINA is scientific giant,yet this Asian giant leads the world in stealing foreign technology.and what about Russia and the saga of the mistral class warships that FRANCE refused to cooperate in building them inside RUSSIA.someone can shed some light here but i think the deal did not see the light of the day as FRANCE insisted in making the warship in FRANCE-now what did the French fear?-they knew that the Russians would copy their technology and render future deals useless !.

conclusion-SO THEN just as the west lure EDUCATED Iranians OUT OF THE COUNTRY giving them better pay but use their intelligence and educational inputs for their own benefit,LET IRAN steal the engines, in German, England ,the US and wherever -
you can not accuse a nation of stealing your technology while you have an army of their sons in your universities and other institutions teaching YOU something!.

The construction of two warships, modified Mistral class, has been commenced in 2011 and first ship is planned to be commisioned in 2014 and the second one in 2015.
Russia managed to secure a transfer technology and a commander of the Russian navy stated that those technologies can be utilized in a bulding and design of large destroyers and other bigger warships.
Recently some problems such as that that special diesel fuel used for Mistral's propulsion may freeze in too low temperatures, emerged and special commision has been working on that problem..

The contract also envisioned that 3rd and 4th ship will be built in Russia with 20% of French participation. However new Russian defence minister ordered that any construction in Russia was postponed until 2016. Official explanation cited a need to evaluate first two warships in service and consideration of possible modifications.
Like I stated previously, that 2016 delay can be designed to watch situation in Syria and that France may consider cancelation of the contract should the international situation worsen...

B.M.A....Educated Iranians don't need to be lured out of the country by the West when you bloody well know that it is the fascist Islamic theocracy which is scaring away the young because of their barbaric acts against the people.
Just keep up your nonsense.

Take a look at all the technological blue-prints and classified research documents that was seized by the U.S. and the USSR after they defeated and occupied Germany in the 40's. Iran is 'stealing' engines? Big deal. Iran should obtain euqipment anyway it sees fit, good on them.

No one will give free technology to an independence-loving country. No, but even the puppets will not be given the full technology (review Shah's era).
So, stealing,lying,clubbing etc...to get it is the way to go.
Since technology became the property of western nations, circa 17th century, it ceased to be free because of the Caucasian natural greed and spite against the progress of other races. When Muslims had the technology, anyone was welcome to copy and use it for the benefit of mankind. This is the difference between those who preach freedom, liberty, fraternity.......pooh

tubtuilayka....In Iran we call people like you OGHDEHE va DOROGHGOO.
Muslims never had the technology.It was stolen from the Sassanid empire by the Muslim hoards and what ever they didn't understand they destroyed or burned.
And one more thing the puppet was Khomeini which the US and British help to install.Britain and US loves mullahs because they know they can keep the people backward and sell Iran to the lowest bidder.

Really? Do you really believe, with your full mental capacity of reasoning....that the West love the current Iranian rule? If what we see is love, what is the colour of hate, then?
I advise you to make a quick appointment with your doctor!