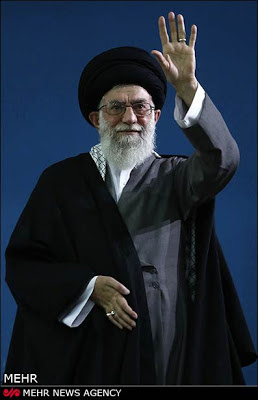 Iran’s Supreme Leader Ayatollah Ali Khamenei on Saturday criticized the actions of the country’s president and the response by Majlis speaker in their dispute displayed publicly and broadcast nationwide. In the past few months, Khameni has been asking Iranian officials to refrain from publicizing their disputes.

Referring to Ahmadinejad’s accusations, aired publicly during a seesion of Majlis discussing the impeachment of one of his ministers, Khamenei said: “The head of one government branch brought an unproven accusation against the other two branches of the government, which is an inappropriate action and a violation of the fundamental rights of the people. It was also against Sharia, against morals and illegal.” (Mehr News Agency, 16 February)
He also criticized Majil Speaker Ali Larijani’s harsh response to Ahmadinejad and denounced Majlis’ action to impeach his minister of labor on 3 February.
“The impeachment was not right; especially since the reason for the impeachment had nothing to do with that minister,” Khamenei said.
After the parliamentary disputes, Ahmadinejad supporters jeered Ali Larijani in Qom as he was giving a speech to mark the anniversary of the 1979 Islamic Revolution.

So a video tape is not "proof" in iran?

-like a herder who guides his flock to some fields!
-like a humble teacher instilling basic morals to his students!
-like a father teaching some useful manners to his children!
HAIL THE PERSIAN SAGE OF TIME-WHO WILL BE REMEMBERED AND CHERISHED IN THE HISTORY BOOKS FOR THREE THINGS BENEFICIAL TO MANKIND!

ONE-
-The only Muslim cleric to make known Islams position on nuclear arms and making a BROAD DECREE[fatwa]banning them!-a move that makes illegal for any Muslim to pursue,make,support,engage,or associate with nuclear arms!FOLLOWING THIS DECREE,there is intense debate in Pakistan on the whole issue of NUCLEAR program with some clerics mulling to call for a united position to ban the program in Pakistan!!.

TWO-
-May the almighty have mercy and bless this Persian sage of our time for resisting intense pressure inside the country!,many elites,scientists,commanders,senior citizens,had wished that IRAN makes some effort to arm itself with the ULTIMATE WEAPON!THIS come from the experience gained during the imposed wars tat saw SADDAM use chemicals!WELL THE SAGE WOULD NOT BURG TO THE DEMANDS OF THESE PEOPLE and instead went straight to the correct position as dictated in the BOOKS OF ISLAM!.

THREE-
IT was the dream of the west to occupy IRAN, and their new form of occupation is what we are seeing in Saudi Arabia and Kuwait!in these countries they have made sure they don't make independent decisions but always at the mercy of their masters!.THE ISLAMIC revolution was a turning point and a critical bend in the history of the IRANIAN nation .through THE wise guide of AL IMAM -KAMENEI we have seen the Nation breaking away from the ugly vicious grip of the west! MAKING HUGE INVESTMENT IN SCIENCE AND TECHNOLOGY and effectively making the NATION TO occupy the coveted first position on the global index!but the good news about it is that IRAN has invested in its youth here again making the IRANIAN SCIENTIST to take his rightful position in the world!.HAD IT NOT BEEN this wise move then the NATION WOULD HAVE BEEN SUBDUED LONG AGO!!.

DEVIL.
SATAN.
DIV.
ZAHAK.
This specimen sums them all up.

Quote: "Whenever during the talks they come across a logical statement by the other side — and they are unable to answer — they immediately stop the talks and say that Iran is not ready to talk." Endquote

Thank you sir, for making it easy for us to see it!