Ahmadinejad Warns of “Take Over” of the Regime by Larijanis

Fears of Judiciary Putsch to Stop Moderates in Upcoming Election 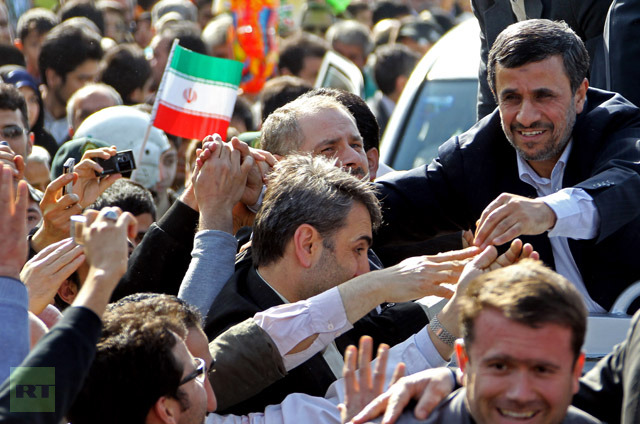 Iranian President Mahmoud Ahmadinejad, in a speech at Tehran’s Azadi Square marking the 34th anniversary of the Islamic Revolution, warned the nation that Larijani family is trying to take over the system. (EA World View, 10 February)
Sadeq Larijani, a cleric and the chief of Iran’s Judiciary, has been gathering increasing influence in the country and has been lately allying himself with the ultra-right Ayatollah Mesbah Yazdi, the powerful theoretician of absolute power of the clerics over political as well as religious life in the country. It is increasingly feared that Larijani, using his powers as Judiciary chief, could stop Rafsanjani or other moderate leaders from winning the June presidential election by arresting him on unrelated charges. He has already arrested two of Rafsanjani's children. Such move, if it happens, would be a putsch by the Judiciary. Ahmadinejad today was referencing such concerns by warning that the Larijani family could attempt to “take over the system.”
Ahmadinejad also strongly suggested that his rivals, including some close to the Supreme Leader, will try to rig the vote in June’s presidential election. He referred to the comments made by the supreme leader’s representative to IRGC, Ali Saeedi, on “engineering the election” as an IRGC’s “duty.”
“People have the right to pick the rulers. No one should (think) that people's vote is only a paper. We need this collective opinion.

“No one should think they can decide rather than the people. Some people have said they can engineer the election.

“I would say the great nation of the people of Iran know which path to take, and institutions and law must be abided by. Destroying others' reputation to prove yourself is not the right thing to do.

“No one can impose his opinions of the people. I am confident the people will make this choice. Everyone needs to respect the vote of the people.
“Some individuals should not act or speak in a way that plays into the treacherous hands of the enemies of the Iranian nation,” said Ahmadinejad (EA World View, 10 February)

I don't understand; is Larijani now on the side of Mesbah? I thought Ahmadinejad is on that side; if true: it is good thing that Ahmadinejad goes after them ...

Nader, if I'm right, Rafsanjani is in the camp of the Larijanis, although he like to put himself as a moderate. Its basically between the band of Ahmadinejad and the band of the Larijanis. And Ahmadinejad, although some say that he's not the real man in power in Iran, is increasingly questioning the Larijanis (and by that including Khamenei). It seems like Ahmadinejad knows simply too much about Khamenei and his entourage, and no one really dares to tackle him. It could be that some powerful man in the Sepah are backing Ahmadinejad secretly. I also read that if this fight continues, the Sepah could intervene.

The two important Larijani brothers, Sadeq and Ali, are not in the same camp. Ali, the Majlis speaker, is close to Rafsanjani. Sadeq has become the leading force in the ultra-right faction after Ahmadinejad's break with the leadership beit, and is supported by Mesbah.

Ahmadinejad does band the two brothers together, but that's not accurate and he's probably doing it because it's convenient for him politically.

It really is amusing how certain aspects of American and Iranian politics intersect. Here in the United States, we hear political talk of "voter suppression" to engineer an election, and over in the Islamic Republic the talk is over "reputations" or judicial intervention.

Rasfanjani has zero chance of getting elected president again, in 2013 or whenever. He just doesn't have the popularity required.

Always in "campaign mode", Ahmadinejad is attempting to set himself up for another go at the presidency in 2017.

Except “judicial intervention” under Sadeq Larijani could mean the arrest of Rafsanjani or Ahmadinejad, if the ultra-right in Iran begins to suspect that the popular wave going into the election will be in favor of the moderates; S. Larijani has already practically threatened Ahmadinejad. Of course such “judicial interventions,” as you like to call them, have already been applied to Mousavi and Karrubi, the participants in last round of presidential election. These are very sensitive and critical times for the Islamic Republic. They need to handle the upcoming election with extra care, otherwise they risk irreparable fissions within the current leadership.

Mr Uskowi
The irreparable fissions within the leadership as you claim is very beneficial for the people and will lead to the demise of the Islamic regime.

Arrest of Rafsanjani? will never happen; There might other things like arresting his son but Rafsanjani is 100% immune. Also it is much easier to just "engineer" the election rather than arresting anyone. Rafsanjani probably cannot even join the election because of his age. Ahamadinejad cannot re-elected and his most important aids (Mashaie and Rahihmi) will be disqualified by Gaurdian Consul. Mashaie for obvious reasons and Rahimi for corruption (He has a very big file and it is possible that for political revenge they open his file at some point) Basically Ahmadinejad make a lot of buzz but at the end his hand is empty. I think since many people will not care much to this election, "engineering" would be rather easy and unchallenged

Except "engineering" will not go too well for the losing factions, and this is not 2009. The leadership house will not be facing a popular protest this time, the challenge would come from the elites, some of the most powerful people in the country.

Ahmadinejad can also be assassinated if necessary and the murder blamed on the Israelis / Zionists. That is a possible scenario.

I wouldn't rule out Mashaei being a candidate in the next elections. It seems like Ahmadinejad is trying hard to get him as a candidate, even if that means that he has to go against Khamenei indirectly, which clearly shows that Ahmadinejad has some edge over the supreme leader. It could simply be because he has knowledge of certain intelligence matters (such as hard evidence of corruption against Khamenei's son) but also because Ahmadinejad could be backed by influential Pasdars and businessmen (like Babak Zanjani). They could force the council to approve Mashaei's candidacy. Everything is possible in Iran.

This photo doesn't suggest that the people are going to throw their shoes at him or to protest, that he acquired presidency "by fraud"; like the authors of this blog suggested in the past...

Regarding the above article, I would like to cite the words of Mr, Ali Larijani, who described Mr. Ahmadinejad's actions by the words:
"You did not observe the dignity of the Islamic Republic...."

I believe that Mr. Larijani's words have merits and the president sometimes has emotional grievances with the merits. Despite that, both politicians have the highest qualifications for their posts and contributions...

I'm no supporter of Ahmadinejad. I don't particularly care for his political ideas. But he is truly genuinely popular, both outside of Iran in the 3rd world, but especially inside of the country. He won the 2009 presidential election fair and square. His main base of support consist of lower and middle class segments of the urban population + rural people, factory workers, farmers etc. Together they make up most of the Iranian population that voted in his favor.

1."I'm no supporter of Ahmadinejad."


No kidding? If what you wrote about him is not classed as a supporter then what is?

2."He won the presidential election fair and square."

You make a poor comedian but never the less I will give you benefit of the doubt and say......LOOOOOL!!

3."His main base of support consists of lower and middle class segments of urban population +rural people,factory workers,farmers etc"

Really? I would clearly say his main support is the lower life forms known as the Basij and other fillers of the IRI mafia.

4."Together they make up most of the Iranian population that voted in his favor."

For someone that doesn't support Ahmadinejad you sure put a lot of effort into promoting him and the regime's system. So why not just claim that Ahmadinejad won 99.999 percent of the vote and save us the time in reading your nonsense.