General Hejazi on the state of Iran’s defense and Gaza

The General further stressed preparedness of the Iranian military forces to defend the country and its borders.

Referring to Israel's failure in the 22-day-long war against the defenseless people of Gaza, he added, "The equipments employed by the Zionist regime (of Israel) in this unequal war were today's most advanced weapons in the world."

Noting the Israelis' premeditated plan, the commander assessed that the Zionist regime did not expect Gazans would continued resistance to the end.

Israeli forces failed to attain their military objectives after 22 days of attacks on Gaza's civilians, houses, mosques and schools in which 1400 people died and over 5500 others wounded, most of them women and children.

"The Islamic Resistance's tactics were not known to them (Israelis)," he added, explaining the reason underlying the Israeli army's failure in attaining its goals through the onslaught against Gaza.

The strike on Gaza by Israeli forces must be under study by Iranian and Hezbollah tacticians. Despite Hejazi's brave words, the Hamas defense is probably looked upon as something of a disappointment.
Posted by Mark Pyruz at 4:03 PM 4 comments:

Iran has completed the design phase of its stealth aircraft, the commander of the Iranian Air Force announced here on Sunday.

The preliminary stages will be finished in late March and then production will begin, he stated.

Iranian engineers have made a major breakthrough in designing stealth aircraft that are difficult to detect by radar.

Shah-Safi said that the Air Force has also tested a new air-to-air heat-seeking missile manufactured by the Iranian military.

The new missile, which has a range of 100 kilometers, will be mass-produced by the Ministry of Defense, he added.

An Iranian aid ship bound for Gaza has not yet received permission to dock at the Egyptian port of Al-Areesh, 50km off the coastal strip.

Ahmad Navvab, a provincial Red Crescent director, said Wednesday that although Egyptian authorities issued permits for the aid's dispatch via the Al-Areesh port, they have so far prevented the ship to drop anchor.

"Their pretext is that the port is at full capacity and lacks necessary space for another ship," said Navvab, adding that Egyptian authorities issued permits only after coming under international pressure.

Navvab said the vessel, holding an estimated 2,000 tons of medical and food supplies for the humanitarian crisis in Gaza, is currently anchored some 15 miles off the coast of Gaza.

This comes after the Israeli military intercepted an Iranian ship on January 14, even though it left the Egyptian port of Said with the paperwork required to dock.

Egypt, the only state which shares border with the Gaza Strip, has been coordinating all activity with Israel regarding the Iranian vessel.

Posted by Mark Pyruz at 3:45 PM No comments:

The [Israeli] Navy is closely tracking an Iranian ship that has attempted several times to breach the naval blockade imposed on Gaza and transport humanitarian aid to the Palestinians.

On Tuesday, the boat docked in Port Said, Egypt, but the Egyptians refused to allow it to unload its cargo and at midnight Wednesday the boat tried sailing into Gaza.
A Navy Sa'ar 4.5-class missile ship intercepted the Iranian boat and transmitted a clear message on Channel 16 - the international communication line for ships - that it would not allow the boat to dock in Gaza.

On Wednesday morning, when it was 30 miles off the Gaza coast, the Iranian boat again tried to move toward the Strip, and the Navy again intercepted it. It then returned to el-Arish, Egypt, and two Egyptian boats prevented it from docking there.
Since that time, the boat has been sitting 30 miles off the coast of Gaza and is being closely tracked by the Israeli navy. Israel and the Egyptians have been coordinating all activity regarding the Iranian boat.

The head of the humanitarian aid group sponsoring the ship, Ahmad Navabi, said in comments aired on Iranian television Wednesday that the Israeli navy approached the cargo ship, Shahed, about 20 miles off the coast of Gaza at dawn Wednesday, and ordered it to turn back.

"An Israeli warship approached our cargo ship and warned us not to approach Gaza. We could see the lights at Gaza coast. We were forced to change route toward an Egyptian port," Navabi said.

This is the first Iranian boat to try to reach Gaza during the blockade. On December 30, a boat carrying activists and medical supplies to Gaza was turned back after an altercation with the Israeli navy. Israeli officials said the boat tried to outmaneuver an Israeli navy ship and crashed into it, lightly damaging both vessels. 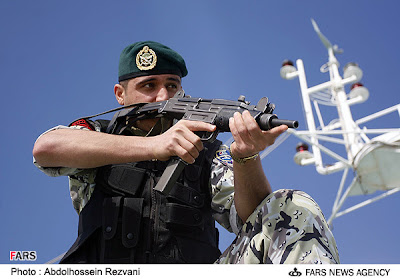 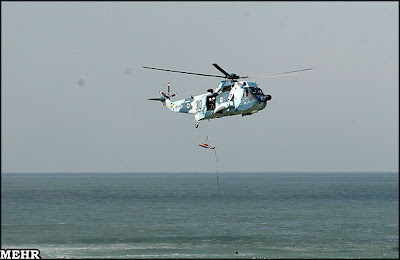 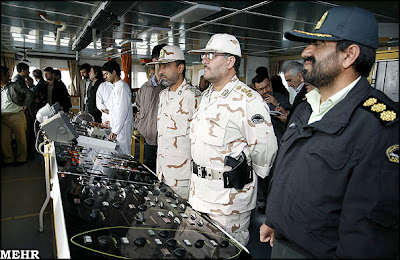 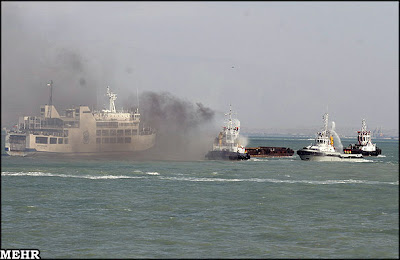 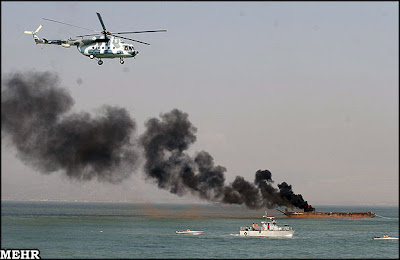 There is a well written piece by Professor Farideh Fahri over at Informed Comment: Global Affairs. It is titled "Israel, Gaza War, Return of "Emboldened Iran," and Obama. Below is an excerpt:

A curious pattern characterizes the recent military adventures in the Middle East. Overwhelming and disproportionate force is utilized in the name of at least temporarily popular objective – combating terrorism, preventing WMD proliferation, restoring deterrence, bringing democracy and so on. But once the human costs and efficacy of attacks in terms of stated objectives begin to be questioned, the narrative shifts and the argument for the sustenance of war, refusal of ceasefire, or even the need for “victory” begins to rely on the line that if a certain party or organization in question is not crushed, all the extremist forces in the Middle East led by Iran will be emboldened.

Read the rest by clicking here.
Posted by Mark Pyruz at 4:42 PM No comments:

Iranian Defense Minister Mostafa Mohammad-Najjar on Saturday praised the strong resistance against Israel army by the Gaza people and predicted the Zionist regime will face “more humiliating” defeat than it faced in its 33-day war with Lebanon’s Hezbollah in 2006.

Talking at a Defense Diplomacy Committee meeting, Najjar described the Gaza war as a war between the “paganism and Islam” and said that the Muslim world must rise up to defend the innocent people of Gaza.

Referring to the “war of nerves” against Iran in regard to Gaza, he said Iranians’ moral support for Gazans do not abdicate the Arab countries’ responsibility toward the Gaza tragedy.

He said certain countries’ complicity with the Zionists encouraged this regime to mount a war against Gaza.

He noted the Security Council resolution will not deter Israel to stop genocide in Gaza, saying more serious decisions must be made to end the crimes in Gaza.

Oil as a potential weapon

A Revolutionary Guard commander is calling on Islamic countries to use oil as a weapon to end the fighting in Gaza, echoing a similar call days earlier by lawmakers in Bahrain.

The demands by Mirfaysal Bagherzadeh, a brigadier-general in the elite Iranian military unit, are unlikely to lead to an immediate embargo as they don't come from the oil rich Persian Gulf nations' top rulers or carry the support of other major producers like Saudi Arabia.

But they do highlight the depth of anger in the region over the Israeli offensive and the threat it poses to oil prices that recently fell to their lowest levels in years.

Iran's official IRNA news agency on Sunday quoted Bagherzadeh as saying oil is "a strong factor of pressure" on supporters of Israel in the current "unequal war."
Bagherzadeh, who is in charge of war memorials and is not among the country's top oil officials, noted the West's dependance on energy resources from the Muslim world and called for a cut in crude exports to supporters of Israel, IRNA reported.

Iran's foreign ministry did not appear to distance itself from the comments when asked about them Monday.

"We do support any action for realizing two main steps: an immediate stop to the invasion and an end to the Gaza blockade," foreign ministry spokesman Hasan Qashqavi said.

The Iranian comments come days after members of Bahrain's lower house of parliament condemned Israeli attacks on Gaza and told the tiny kingdom's foreign minister that "all retaliation options" should remain open to Arab governments.

Lawmakers said Arab states should use economic weapons such as oil and the region's vast investment funds to put pressure on the West to help bring an end to the fighting.

- Director of Iran's Supreme National Security Council Saeed Jalili arrived in Damascus earlier today for a meeting with Syrian President Bashar Al Assad to coordinate their response to the Israeli offensive in Gaza.
Posted by Nader Uskowi at 4:02 PM 6 comments:

The repercussions of the Israeli bombardments of Gaza are being felt in the entire region.

1. Kadima/Labor move to a) unseat Hamas and b) gain upper hand in the upcoming elections against Bibi Netanyahu is not succeeding. Hamas popularity can increase in the aftermath of the tragic consequences of the bombardment of densely-populated areas. Hamas does not fall by aerial attack; it falls if the Gazans turn against it and accept Mahmoud Abbas as their leader, an unlikely scenario. An outcome similar to the 33-Day War can also play into the hands of Bibi Netanyahu, calling for change of an inept government.

2. The moderate Arab governments will pay a high price. The most precarious situation is in Egypt. Not that the Egyptians have found a new hero in Hamas. But with their lives in near economic ruins, they can find any excuse to hit back at their government. Mubarak’s supposedly prior knowledge of the Israeli attack and the closure of Rafah border crossing during the height of the humanitarian crisis in Gaza have further damaged his reputation that can only help the Muslim Brotherhood. The Jordanian and Saudi governments are also feeling the heat.

3. Hamas inability to wage an effective military response to the Israeli bombardments once again demonstrates the inherent military weakness of an organization that is more suited to carry out terrorist activities. Hamas, however weakened, can still survive the areal attacks. Defeating it requires wining the hearts and minds of the Gazans.

4. The Islamic Republic can come out of this conflict as the only winner. By taking the moral high ground, the Iranian government can solicit the support and sympathy of the Iranians as well as the public opinion in the region. The Israeli attack has also given Ahmadinejad a new window of opportunity to highlight his anti-Israeli credentials during the upcoming presidential elections. It also gave his government an excuse to close Kargozaran, a leading moderate newspaper supporting Rafsanjani, his arch enemy.

5. The real victims of the attacks are the Gazans, with more than 400 dead and thousands injured, and a country in ruins. The Palestinian people deserve a better fate: a stable government and a country of their own. The warring sides, the Israeli government and the Hamas, are the real obstacles to achieve those goals.
Posted by Nader Uskowi at 4:12 PM 6 comments: