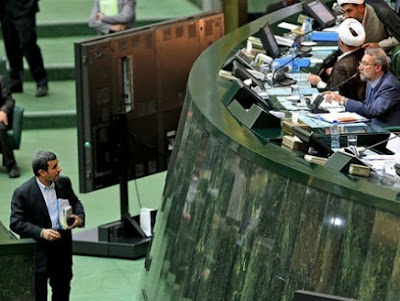 Iranian Majlis, led by Speaker Ali Larijani, today delivered a blow to President Ahmadinejad by impeaching his minister of labor and Larijani publicly humiliated Ahmadinejad by saying that he lacks proper manners for a sitting president.

Ahmadinejad himself had earlier accused Larijani and his family of corruption and produced an audio recording of Larijani’s brother to support his corruption charges. Larijani reacted by saying that playing the tape showed Ahmadinejad's lack of character.
“Our problem is that our president does not observe the basics of proper behavior,” Larijani told Majlis. “Why did you discuss this issue here?”

“Actually it's a good thing ... that you played this tape today, so that the people better understand your character,” Larijani added. (EA World View, 3 February)

After a sharp exchange of words and accusations between the president and the speaker, Larijani refused to allow Ahmadinejad continue with his case against him and his family and asked him to leave the Majlis.

“Unfortunately you do not observe ethical and moral values in your words. Please leave,” Larijani told Ahmadinejad. (EA World View)

Majlis then voted to impeach the minister of labor.
File Photo: Larijani at speaker’s podium; Ahmadinejad preparing to address the Majlis (IRNA)

Corruption and Islamic theocracy go hand in glove together.

Ahmadinejad showed a video indicating corruption on the part of Larinjani's brother (?). What does this have to do with Larinjani himself or the parliament's decision to impeach Ahmadinejad's minster of labour? It was a low blow and a desperate move by Ahmadinejad and his minister was legally impeached.

Amusing to see Iranian politics as divisive as our American Republican and Democratic parties.

With the important notion that both the republicans and democrats are democratically-elected representatives. Unlike Iran, where nepotism, clientelism and corruption are widely spread, and where a authoritarian system is suppressing other non-conformistic ideologies. This is not a consequence of political pluralism in Iran, but a consequence of a political divide and conquer tactic by Khamenei and his advisors. As in contrast to the US, where you can see the results of political schism in the society, the Iranian people are only spectators in this macho behavior.

amusing, in a sad way, that you constantly ignore the differences between politics in a democratic republic and in a dictatorship.

Iranian politics is indeed amusing. But also scary. Mousavi was sent to house arrest after the last election. And this year, the regime probably would not allow any of Ahmadinejad’s closest allies even run for office; same Ahmadinejad that was hailed as a savior not long ago.

I cannot judge if Ahmadinejad's charges of corruption in this particular case is justified or not, but corruption is the Achilles' heel of this regime, as was for the Shah's. Corruption destroys from the inside.

The Jackals have turned against each other. It is great to watch.
Also an indication of the loss of authority by Khamenei as he has done everything in his power to shut them up.
When Khomeini asked them to shut up, they all did.

How come the leaders need the castle wall to protect them? Do they like to speak down to the people? It looks like that there are Hanuman Langurs in Iran too!

DEMOCRACY in practice in the majlis!!.VERY PLEASING TO SEE IMPUNITY NOT BREATHING in the IRANIAN parliament.-the MUSLIM has to learn something or two about religious democracy practiced in IRAN- duh!-a sitting president humiliated by the speaker and forced out ,in a spectacular show of a flouring democracy in the majlis!MANY COUNTRIES EVEN AMONG THE SO CALLED DEVELOPED TREAT THEIR PRESIDENTS as though He is an angel in human flesh!

B.M.A,why don't you keep your silly and unfounded comments to yourself?
For you to give lecture to Iranians on this blog about the so called democracy in practice in that barnyard is both insulting and hilarious at the same time.

BMA your ignorance about the nuances and intricacies of the domestic Iranian Politics is astounding.

the Majlis is not in any way democratic as all the candidates for seats are selected by the dictator and his circle of advisers.

No one else even gets on the ballot. Should Iran's Nobel laureate, former judge Shirin Ebadi wish to run for election, she would never be allowed to do it.


your comments continue to be egregiously ignorant and untruthful.

YOU WANT and wish to be ruled by a woman in the name of democracy! and you think the country has trampled upon the rights of women denying their rights simply because they wont allow the former Judge[Shirin Ebadi] TO RUN for president!.

now be honest and answer me this one-WHY HASN'T THE BEACON OF DEMOCRACY the u.s.a HAD A SHE PRESIDENT since birthday, somewhere around 1776 A.D!! till now ??.

B.M.A: A woman carried you for nine months and gave birth to you.
You should be very grateful that a woman should be a President or Queen of a nation.
Shame on you!