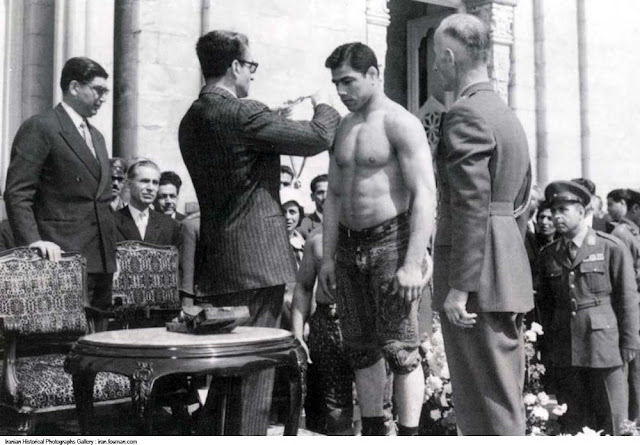 
The IOC announced today that they are dropping wrestling from the 2020 Olympics to make way for a new discipline to be added later this year. (1)

"Wrestling, which combines freestyle and Greco-Roman events, goes back to the inaugural modern Olympics in Athens in 1896."

The US and Iran are among the countries with competitive wrestling teams in past Olympics and many of the Iranian Olympic medals come from this discipline in sport. Iran's first silver medal in the Olympics was by Gholamreza Takhti in 1952 (2,3), and first Iranian gold medal was won by Emam-Ali Habibi in 1956 and was also in wrestling (3).

With Iran becoming a "light weight" in world politics and sports governing bodies it is unclear if the IR did anything to try to influence this decision by the IOC.

A disgrace. If there is one sport with a true traditional Olympic soul, its wrestling.

I don't follow the last part, Doc. Are you saying that the Iranian Government either wanted or somehow caused this to take place? Can't much imagine it's what they wanted...Since it's one of the few sports they're actually good at. Backlash by the Europeans, maybe? After all, who dominates the sport? Russia, America, Iran, and all those little countries in the Caucuses and all those "Stans." Not a popular bunch of folks in the E.U.S.S.R.

You don't agree that a government representing Iranians should have made a big issue out of this? Since you say you are not iranian, I would like to point out that wrestling is a national sport in Iran with ancient roots and cultural importance.

How is it that there was no public lobbying against this by the iranian regime? In fact i can't find a single mention of this issue in the Iranian media prior to this post.

I guessed you missed the presidential trip to Egypt last week.

Or the high level exchanges with India.

Or the high level exchanges with South America.

By the way, because of our American policy toward Iran, we're now paying 25 cents a gallon more for gasoline. How lightweight is that? If only we had a president with the courage of Nixon. I'm not saying I'm a fan of his, but he sure did right with his rapprochement to China. Ever been to China, Jabbar? I've corresponded with Professor Baum of UCLA, who has been visiting China for over fifty years. The mutual benefits to ordinary Chinese and Americans has been immense. Any trip to China will leave you awestruck, if you're familiar with how it used to be. Even a trip to Tehran nowadays will leave you impressed by the progress of the city and its citizens. Even so, with rapprochement, the economy, like China's, would take off like a rocket ship.

This is really gay (and I mean not happy) of the IOC. What next, only synchronized water sports and dancing moves?

I don't believe what I'm reading! Wrestling dropped from the Olympics???!!
If it's true may the people that decided this rot in Hell!

Iran,Russia,Eastern Europe,USA are the countries that are the powers in this sport and none of them decided to stop this decision?

This is the bread and butter of the Olympics and as far as I'm concerned the Olympics is not the Olympics without wrestling.You might as well make Ab Gosht without the Gosht!

No worries.
A one time exception on the swearing:)

As always Mark, you are spot on with your comments. Thanks for saying this, now i don't have to waste my time explaining this to our friend Jabbar.

"How is it that there was no public lobbying against this by the iranian regime?"

@anon 4:38
You notice that my post is from three days ago and the Iranian response, or so called lobbying, is from 48 hours after.

Too little too late obviously. If this IOC decision is to be "reversed" it will be through the efforts of other countries, as Iran is too busy with more pressing issues like rounding up activists and journalists and plans to expand the prisons.

These games are set for 2020; do you really believe Iran expressing its disapproval in the first hour or first few days really makes a big difference? Regardless, your implications that the regime was in one way or another (partly) responsible for IOC's decision to ban wrestling is completely unfounded and based on... shoot, I don't know, an inclination to believe that anything that goes wrong can be placed upon the regime?

FYI, lobbying is done before decisions are made. Iran shouldn't be caught by surprise about issues like this considering how culturally important wrestling is in Iran.

Granted, this regime shortcoming to lobby on behalf of the nation before the IOC decision is unimportant compared to the total loss of freedoms and livelihood under the IR.

When you are given an important podium like this blog with more than 60'000 visitors per month .it is advisable to remain factual and neutral when reporting or objective when presenting your opinion.
Academia and renowned scholars always follow this code of conduct ,they understand that in order to assert their opinion they need to build their case on an unshakable ground backed by facts not speculation nor fiery remarks.

They understand that failure to do so, only results in discrediting themselves and along the way their hypothesis and even the podium itself .

Surely among the audience there are always people , who would regard fiery remarks and personal speculations as an insult to their intellect.

I'm sad to say some readers like myself find your comments ignorant and biased .you tend to portray only half of the story ,you then want to present that half truth in an insulting way to assert your agenda .
This post is a perfect example :
Your logic : OIC drops Wrestling =ergo=> Iran Is a light weight in politics
by the same logic I can state that US is a light weight or else how could they let the OIC drop the games? don't you see how absurd my analysis would be if I imply the same logic to a different country.
I'm still hopeful you would stop writing like this or else you would only discredit yourself and along the way this blog It would be a shame if four years of hard work by four other bloggers be dragged down to ZERO.
as great Upton Sinclair very correctly wrote in 1935:
"It is difficult to get a man to understand something, when his salary depends upon his not understanding it!"

looks like heavy weights are teaming up to save the wrestling (1)
"U.S., Iran, Russia team up to save wrestling"