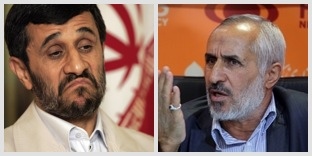 
Davood Ahmadinejad has publicly criticized his brother, the Iranian president Ahmadinejad, for using the term "زنده باد بهار" (long live spring) in a reference to the approaching Iranian elections (1).

The president's brother contends that the indirect mention of the election in Ahmadinejad's recent speech is contrary to the supreme leader directive to not start the "election campaigning" early in order to minimize the appearance of political divisions in the country. (Good luck with that!)

He recently came in support of Larijani in his clash with his brother. Mr. Larijani referenced Davood Ahmadinejad in his parliament speech as a source from whm he had received information on the deviant faction (جريان انحرافي),  in a reference to the Mashaai camp which is supported by the president.

Davood Ahmadinejad had resigned a post in the president's office in 2008 and has been close to the conservative camp, but It is not clear if this affirmation of allegiance to the supreme leader and Larijani, at the expense of his own brother, is out of his long held convictions or is an act of political self-preservation.

So Mahmoud has his own "Billy Carter" in the family. Amusing.

Yes Mark,
I agree!
It's just like the USA; Practically indistinguishable!

Maybe you should better use your time and explain what does it mean an "Innocent passage" in the Strait of Hormuz...

@A-F 8:09
Sorry to shatter the illusion but I was being sarcastic.

Or to speculate about John Kerry son in law's marriage to the Kerry's youngest dauther Vannessa and its implication on the Us - Iran war desired by YOU... and your comrades on this blog (including puppets and proxies)...

In conjunction to that news, is it still possible that Iran and the US will go toogether into a bed instead to a war ????

Congratulations for a "show" with Mark, how to "initiate discussions" on this blog and to undermine integrities of the "enemies"...