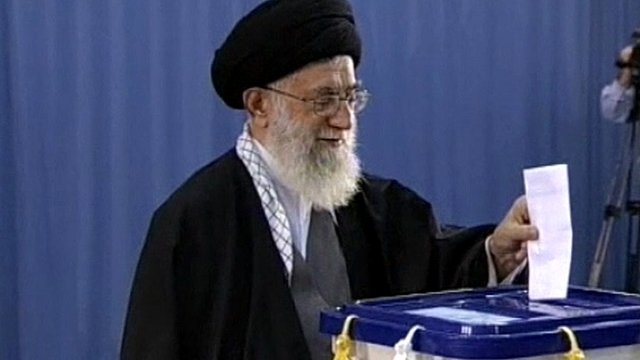 Reformist newspaper Etemaad (not to be confused with the closed Etemad-e Melli, which was affiliated with the opposition figure Karoobi) reported today that the supreme leader met with three reformist figures (1). The paper did not divulge the date of the meeting. This would be the first such meeting in the past 3.5 years. 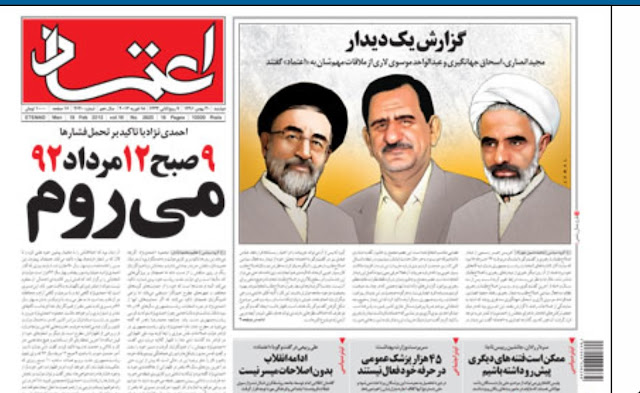 With the presidential elections drawing near, it is still unclear whether the "reformist" candidates will be allowed to run. As most are aware, the "democratic" system in Iran is unique in that you are "free" to vote for whomever you want so long as he or she is one of the "preselected" group of individuals with proven loyalty to the IR regime. In 2009, many would argue that having failed to disqualify the "opposition" candidates from running, the regime resorted to vote rigging.

The government body in charge of approving and disqualifying candidates is the Guardian Council (2). It consists of twelve members, half appointed directly by the supreme leader, and the other half are nominated by the judiciary and then approved by parliament. The head of the "Guardian Council", Ayatollah Janati gave an interview on Dec 14, 2012 in which he made it clear that “seditionists [a term used for reformists] could not participate in the [2013] elections" and that "they should have no misgivings about that" (3,4). It is worth noting that Janati was public in his support for Ahmadinejad's candidacy during the last "election". 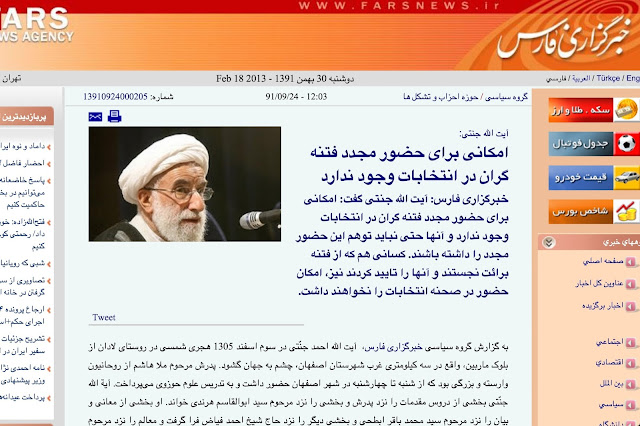 For "reformists" it remains to be seen if they would even participate in the elections, and if they do, how many candidates, if any, would be considered loyal enough by the regime to allow their names on the ballot.

Even though the supreme leader has in the past pressured the guardian council to reverse their decisions to bar some candidates, there is no indications that he would do so this time around (7). The three reformists meeting with the supreme leader may still be holding hope that he might.

Aside from the fairness issue, there is no guarantee the election itself would be free at the ballot box (no international or independent monitors are allowed). Rafsanjani, Ahmadinejad, and Rezai, among others, have called for a "free and transparent election" but they were rebuffed by the supreme leader when he said that "hinting at the need for transparent and free elections plays in the hand of the enemies"(headline below). 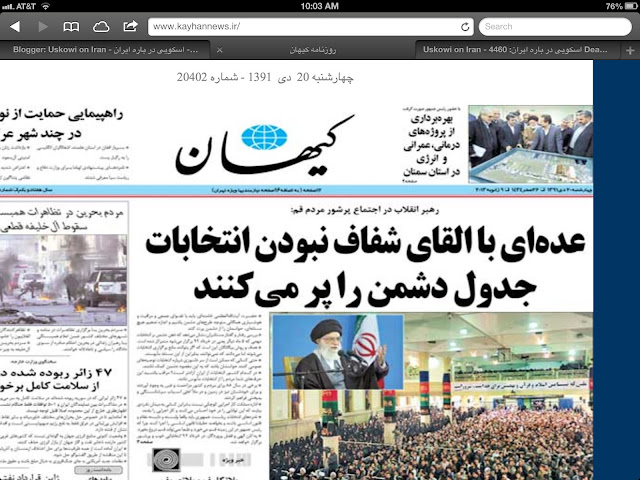 The Supreme leader's representative in the IRGC was very open about the appropriateness of engineering the elections for the greater good (5). Whatever the degree of engineering by the IRGC, the Guardian Council, and the supreme leader, the IRGC is guaranteed to be a major player in this election, at least as the power on the street that insures the regime's survival, regardless of the election outcome.(6)
Even if by some miracle reformist names make it into the ballots and the IRGC allows them to win in a free and unengineered vote, we would end up with another Khatami-like era, where reformist ideas didn't see the light of day, as the supreme leader still has final say and veto power over every decision made by the elected president and the parliament.

Despite all the political drama, the upcoming election in Iran is unlikely to alter the perception that the IR is a true dictatorship despite its complex democratic facade.

It would actually be a smart move by Khamenei to back some reformist candidates. One of the most severe mistakes Khamenei has made was to back Ahmadinejad during the 2009 protests, as Ahmadinejad turned out be a pain in the ass, as no other president has ever been. Reformists are much easier to control. They aren't backed by a military elite, and as Khatami's era proved, are much easier frightened. But it could already be too late for Khamenei to bring life back into the reformist camp. Ahmadinejad is on a roll.

The era of "reforming" this regime is over.

analogous to the Grand Wizard of the KuKluxKlan meeting with members of the reform wing of the organization.

Is this stupid old man Khamenei going to die anytime soon? Before he manages to get Iran bombed back to the stone age, via the USAF?

I don't know how closely you observe Iranian politics, Jabbar, but there are some obvious inaccuracies in your post.

1) Reformist candidates did run in the midterm election in 2011.

4) The last photo in your post shows NAJA police officers (engaged in excessive force), not the IRGC.

6) Your notation 5 is a mistranslation, provided by ISNA. (These are not uncommon in Iranian media).

7) Your notation number 6 is a reference by Muhammad Sahimi who left PBS Frontline Tehran Bureau after repeated infractions of that source's objective guidelines; subsequently that source was dropped by PBS Frontline. This is a case of "garbage in, garbage out" (GIGO).

Please make a note of this, as the mission statement of "Uskowi on Iran" is to present "factual reporting on Iran".

By the way, I notice you haven't taken up the challenge of refuting on a point-by-point basis the Brill election analysis or the Leverett election historical narrative. I don't blame you: even outside and inside observers more intimate or knowledgeable than you with the Iranian election process have shrunk from the challenge.

How can a mass murdering bloodthirsty fascist religious theocracy that bases its laws on primitive barbaric tribalism be reformed?

Mark Pyruz since when do you base your fairy stories on "factual reporting on Iran"?

sir ! although you are entitled to your views and suggestions,i would advice you to take a trip to IRAN.and then make some interaction there with the people, get their views ! it is not hard ,you may come out of the country a different man

@-Iran is not a Taliban era Afghanistan!.anti-regime proponents are trying hard to fool the world in seeing a Taliban rule out of the clerical system in the country.

@-You have not read enough of the leader you are calling names,even the red hot regime critic MD Fazzeli has never gained courage to attack the leader with such high voltage words!!.

@Yossarian:Don't worry my friend behind the clouds there is the sun and the sun represents truth and justice.No power on earth can prevent the sun from appearing just like no oppressive regime can stop the desire for freedom and justice.Your question like millions of others will be answered like a bolt of lightning.

Yossarian, when are you going to use the logo "B", like allochtonie and others do.??

-The cited Etemaad article states that the last meeting between Khamenei and reformists was 3.5 years ago. If you had read the cited link you would have seen that. You are more than welcome to offer verifiable information to the contrary and I'm happy to make a notation that the Etemaad assertion is inaccurate.

-It is a well know fact inside and outside Iran that the IRGC (and the Basij) took over the security of greater Tehran during the 2009 post election revolt. NAJA is simply a tool used by the IRGC and the regime to beat Iranians into submission. The IRGC is in total control of the security apparatus, including NAJA and its fair game to hold them responsible for NAJA actions.

-If you are questioning he accuracy of The Iranian semiofficial news agency ISNA, I suggest you take up with them. You can't blame me for their mistakes or lies.

-Your opinion of PBS or their Tehran Bureau is irrelevant to my referencing them.

-As to my lack of comments on some of your posts, I was merely eing polite at times, and other times I find some of you points self evidently false that they require no further comments.

-With regards to the accuracy of the information in this piece, you have not provided me any reason to make any corrections. You also have not challenged the premise of this article that the Iranian regime is a dictatorship given the unlimited authority of the supreme leader and the vetting process used to disqualify candidates.

-With regards to Uskowi on Iran policies, with all due respect, its not up to you to lecture your colleagues in this forum. All you can do is post your own views to counter whatever you happen to disagree with. I believe that would be the proper etiquette as it has been explained to you via email in the past.

@BMA 1:05
I wouldn't worry about yossarian. He is just building up credit by occasionally insulting the iranian leadership so that his later pro regime views will be seen as credible. This role playing stunt is not fooling anyone.