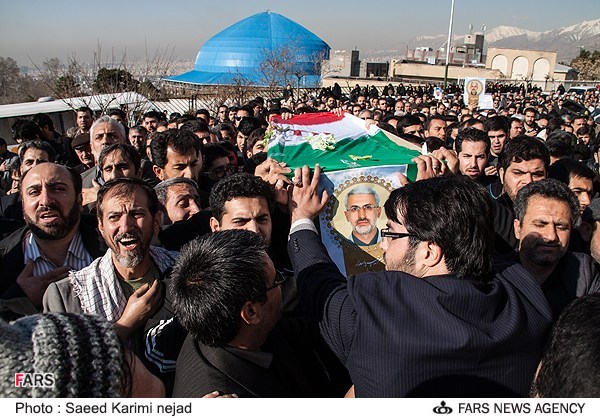 Senior Iranian officials and clerics today led mourners at a funeral for Brig. Gen. Hassah Shateri of IRGC’s Quds Force. Gen. Shatari was reportedly killed during the Israeli attack on a convoy in Syria neat the Lebanese border. The truck convoy was carrying sophisticated Russian-made S-17 anti-aircraft missiles for delivery to the Hezbollah in Lebanon.

At the funeral, Iranian Foreign Minister Ali Akbar Salehi condemned the killing as a “terrorist act.”
Gen. Shateri was a military engineer during the 1980-88 Iran-Iraq and later worked in Afghanistan. Most recently he was reported to have headed the Iranian Committee for the Reconstruction of Lebanon. (IRNA, 14 February)

At least the guy was killed in war.Not like how this very same regime put the most educated officers of the previous regime under a firing squad and thrown from top of buildings.
This guy was the lucky one because the rest of the IRGC brass will meet far worst fates if they don't join the people.

people are with irgc,you live in another land. calld disny land.

He was in fact an equivalent Brigadier General (see shoulderboard insignia with single star on uniform):

"General" is a specific U.S. military rank, equivalent to the Iranian IRGC rank featuring four stars on the shoulderboard. No one in the IRGC currently holds that rank, the rank being inactive for the entire Iranian military.

Rest in peace to a brave and selfless son of Iran.

No the people are not with IRGC.

YOU ARE WITH IRGC.

You live in your dreamworld.

All the IRGC "brass" are a bunch of uneducated fanatics who were nothing but fruit and veg sellers.They wouldn't be worthy hiring to clean the public toilets with.
Therefore you couldn't possibly compare them to a real educated army let alone officers of US military.

Oh,and don't forget the Iraqi army was halted by the former IIAF personal a highly educated force of trained and patriotic men.

Absolutely right. Look at that idiot Firuzabadi who is a Vet and is being called Dr (All of them have the complex of not having a proper education, that is why they all became Dr this and Dr that by being given fake degrees) and has not even attended a one day course of military officer's training but due to ass kissing of khamenei now is a "Sarlashkar" !
have you see their pictures when they salute the armed forces passing them?
That is why I am sure the IRGC will crumble like a house of cards in the event of an Arial bombing campaign. They think the US army and Nato are the same as the Iraqi troops with their first world war tactic and export versions of Soviet junks.
I would like to see them withstanding attacks by F 22 Raptors with their 40 year old F-4's / F-5's and 20 year old Mig 29's and copies of 35 year old SAM batteries.

They have Doctors in lying,stealing,imprisoning,raping,torturing and murdering.
Firuzabadi is as useful as a knackered elephant.He may be used to block the straits in case of hostilities.

may the entirety of the people lately under his command and all their associates join with him in eternal peace.

You've got a point there.