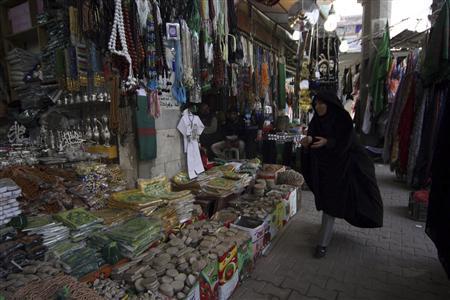 Reuters’ Andrew Torchia reports from Dubai that as Iran sanctions tighten, the country’s economy remains under pressure but far from collapse. Torchia observes that shops in the city are crowded; finding a seat at good restaurants can be difficult, and the ski resorts in the mountains north of Tehran continue to attract Tehran's glamorous and well-heeled.

“The economy has problems with the sanctions, yes. But it's still working," an Iranian resident of Dubai is quoted as saying. “It isn't as bad as people outside the country think.” (Reuters, 20 February)

Torchia believes that sanctions are not close to having the “crippling” effect. The Iranian government has found ways to soften the impact, and Iran's economy is large and diverse enough to absorb a lot of punishment.

Sanctions will never get Iran to capitulate, ever. America's strategy towards Iran has been wrong since day 1.

Mr. Uskowi, thanks for posting reality indeed. As most of the rational and objective people have been saying since 1979, foreign pressure will not break Iran, it could not do so even in the worst period 1980-88. Realistically speaking, Iran is a large/medium sized nation of over 80 million very resourceful and motivated people sitting on top of immense riches of natural wealth, it shares at least 8 land frontiers and over 2400 kms of open coastline. It also is located in the heart of rising Asia with China as its top trading partner and good ties with India, another rising superpower. It would be total lunacy to think that a nation that fought with bare hands in the 80's to defend its soil would give in to empty threats by a bunch of cowardly Zionists and a decaying US. Anyone with even a sophomoric knowledge of economy or Geo-strategic affairs would realize that Iran is a bridge too far for intimidation or crude threats, particularly as power shifts to Asia. It is good to see you posting more factual posts. Iran Payendebad.

The West is only playing softball with these gangsters because it suits their purpose to keep this regime in power so that the country can be raped by China,Russia,Turkey, India and so on.
But the Americans and the West so far are only interested in maintaining contact and try to "reform" the regime by these so called sanctions.Remember it was America and the West that helped install this regime of mullahs in the first place by using certain members of the gullible public of Iran for their Jim Jones style suicide pact.
Now sit back and enjoy the fruits of the misguided insurrection.

Did you miss your meds for the day?

Thanks for your comments and compliments.

The post is the observations of a foreign journalist. While we need to take note of such unbiased observations, we should not believe they tell a complete story of Iran’s economy. The economy of a large and diverse country such as Iran is indeed complex and full of contradictions. While upscale restaurants may be indeed full of customers, and that’s what a foreign visitor naturally observers, many citizens have difficulty putting food on the table.

The reality is complex: oil revenues cut in half and expected to go down further; economic growth non-existent (please see my other post on Majlis research center report); inflation much higher that CBI’s figures. But at the same time this is a large and diversified economy that will not come to standstill because of current sanctions. We’ll probably witness a long period of slow economic growth, or even contraction, unless Iran resolves the issues surrounding the nuclear program and the related sanctions.

I think you don't count the energy problem that world is facing. Sanctions against energy resources might work for a while (a year or two) but the moment economies around the world start to recover it becomes increasing more difficult to force them to ignore Iranian resources (2nd Gas reserve and 4th oil, is a big deal) The time that US dictate to others is passing very fast and soon big countries like China with increasing energy needs will publicly put down US completely. I think it is what iranian leader also thinking. If Iran can stand against these sanction and bullies for 2-3 years the sanctions will be vanished (practically) because of the reality on the ground.

In 2-3 years many other things can vanish! The Iranian authorities should take the current oil sanctions seriously. The oil markets are starting to get used to a world without Iranian oil. Iraq and Libya’s production is dramatically on the rise. And the most surprising development has been the rise in the U.S. oil production (by some 800,000 b/d). They should start thinking of policies to end sanctions now, not in 2-3 years.

we will see about that

Far from collapse. Duh. Neutral observers such as the Leveretts have on a number of returns from the Islamic Republic reported the same based on their first-hand observations. But like always, the Iran "experts" here, stateside, many of which haven't seen Iran in many, many years have been for the same period of time claimed the sky is falling upon the country.

Time to start taking the Leveretts and other far more credible sources seriously.

What,you have some of yours left?

Ha Ha Ha! You and your Leveretts !

Strange! Iranians wishing their country ill, just because of a regime that may go tomorrow!
Why the Americans, with their fabled idiocy, won't go as far as that? Beats me.

Collapsing is a strange event because it has the tendency to surprise when least expected :o)

it baffles everyone!-but sad thing about it is that all those ill wishers are the enlightened, not the illiterate Syrian jihadists kind!.