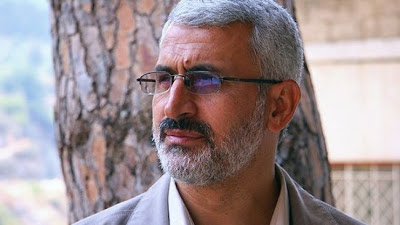 The opposition's Syrian Free Army announced today that the Iranian Brig. Gen. Hassan Shateri (aka Hesam Khoshnevis) who was reported killed in Syria was among the casualties of the Israeli air attack on a convoy near the Syrian-Lebanese border on 30 January. (BBC, 14 February)

News agencies reported at the time that the truck convoy was carrying sophisticated Russian-made SA-17 anti-aircraft missiles from Syria intended for delivery to Hezbollah in Lebanon. Shateri was a general officer at IRGC’s Quds Force and the first Iranian general killed in the Syrian conflict.

Note: In the early version of this post, the Syrian Free Army had been referred to as the Syrian Army. We apologize for the error.
Posted by Nader Uskowi at 12:55 PM

Khamenei checkmated, he ran out of option ( both inside and outside), I doubt he will survive this year election; anti-Semitism is the foundation of the regime and the world will not accept that foundation; it is simple as that; Khamenei is losing power and it not even clear whether Obama will accept him as a party to a deal anymore while his regime is imploding from within; Khamenei thought he could get away with stealing the election 4 years ago; now he has reached a dead end as a result of his recklessness ...

if true, that's big news and a fine bonus for the bombing.

Good riddance to bad rabbish, the world is a far better place without him.

Well done IDF. One IRGC killer less on the planet.

RIP. He also risked his life during the 8-year war so the rest of Iranians won't need a visa to go to Ahvaz. No matter of politics many of us still appreciate those Iranian heroes who stood against the crazy Saddam and helped Iran to remain intact. Roheshoon Shad!

Bullshit! The war was provoked by the Mullahs and their goal of exporting it to Iraq.
Had they not killed so many well trained Iranian Officers / Fighter pilots and commanders, and destroyed the Army and the Air Force, Saddam would have not dared to attack Iran.

This was not the first time Iran was attacked during her long history by her neighbors and won't be the last time. They find an excuse. The fact is that Brave Young and Old Iranians defended Iran against all odds and we are proud of what they did for Iran and us. And That is not Bullshit; that is what makes us Iranians survive the rigours of history.

you are the only guy with wisdom and love for iran.

west/u.s want to disintegrate iran.mozodor(puppet( sadam houssan) was in charge of the mission.ahwaz and abadan was suppose to be another llittoral persian gulf colony for u.s.brave iranians lost million men to save the country from balkinization.bravo iran.enemy can't touch you today, that why they resort to cowardly act of sanctions to hurt ordinary iranians.

All hateful anti-Iran comments notwithstanding, the Brigadier was martyred in an ambush near the Bekaa and nothing to do with Debka clone sensational BS of Zionist airstrike. The Lebanese confirmed the ambush by Salafi terrorists. This is usual in times of combat as Iranian Generals and senior officers lead from the front. This key characteristic of Iranian military leadership was laid down by Colonel Sayyed Ali Shirazi (the father of the modern Artesh) who always led from the front and even led bayonet charges against Saddam's hordes, unlike "western" or Zionist officers who murder by drone or sit in offices and have email affairs like Petreus. In any case, REST IN PEACE to a brave and selfless son of Iran.

what MAKES YOU believe that 'the world will not accept anti -Semitism'? do not carry THE WHOLE WORLD ON YOUR BACK TO help you fight your imaginary wars!

Well, i had hopes that they have some sense of patriotism in their heart after experiencing the war; instead they allied themselves with Mullahs and have bought into their Islamic nonsense; that is how they lost their way after the war

B.M.A,the world except for a few primitive baboons wont except anti-Semite ideology anymore.Islam has become the religion of hate and backwardness.By the way you express yourself all the time,you seem to be the one that is carrying the whole world on your back with your Islamic ideology nonsense.

We don't consider the IRGC as son of Iran but Son of B*tch.
Good riddance to bad rubbish.

Your language of insults and hate says more about you than anything else. There are plenty wrong with the regime in Iran, insulting a dead soldier does nothing to show how bad the regime is. And at least this guy took arms, risked his life and fought against Saddam's Army. Please tell us what the hell have you done for Iran?

see now how you are even cruel to humble animals!.your fire spares nothing in this world ! a Baboon is a humble creature that to you seems stupid!..PLEASE! spare the wild animals your imaginary semitism wars!!

@B.M.A. You're right,the baboons are far more humble and intelligent compared to the creatures that are in charge in Iran today.
I therefore apologize to the humble baboons and nominate them to run Tehran zoo in a free and democratic Iran of the future.

Note:Islam is known for its utter cruelty towards animals.Specially dogs the most beautiful and humble creatures on earth.It's also known to slaughter camels and sheep in its ritualistic yearly sacrifices.
So please spare us your hypocrisy.

I don't have to answer to regime dregs but since you insist.I know more about these vermin than you will ever imagine.Little do you know we all served our country pal,did you? But it doesn't give you a passport to use that as a leverage to attack torture,rape and murder our people with.When that happens they have lost their right to be respected by the Iranian people that they have oppressed and are still oppressing.
Anyway what the hell was he doing in Syria with our stolen money? When they should be spending our money on our people.Our people didn't give their lives to defend the nation so that a mullah says that Khuzestan be sacrificed for Syria.There are a lot of soldiers that took offense to that. So spare us your hypocrisy and sit tight in the comfort of the West and don't try to be judgmental when you know nothing about the reality.

Anon 11:21 he didn't die as a soldier but as a smuggler of weapons involved in subverting the sovereignty of the Lebanese people.

You can be certain that he didn't die while wearing a uniform.

Self-loathing anti-Iran cowards living as second class citizens in the west are not going to alter an iota in Iran. Get over the FACT that the Islamic Republic is here to stay. Have 34 years of the great revolution not dampened your anti-Iran hate or is is a generational pass the hate club deal. BTW, not one of you losers has served Iran in any capacity as you are oblivious to our history and political dynamics. Feel sorry for such disrespectful and low life comments against the deceased, specially a brave man who died serving the Iranian nation.

Again congratulations to the Israelis and well done. Hope to see more of these eliminations of these filthy rats.

dear brother, your level of ignorance on divine religions is on a pathetic level!-indeed MAY THE ALMIGHTY have mercy on you and guide you to HIS will !!.

There was never an "Iranian revolution" but a takeover by the lowest form of dregs in Iranian society,the mullahs and their filthy minions.
All I can say is congratulations to the Israelis for destroying the smugglers convoy of contraband missiles.The smugglers who were killed in this perfect air strike were not "sons of Iran" but sons of sighe of the dictator and the regime that is occupying Iran.
Their good riddance is Iran's rebirth.May more follow the path of their imam.