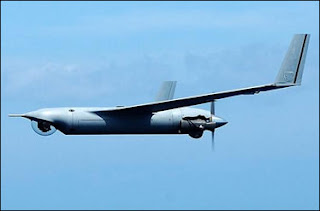 Iran’s state-run Press TV reported on Sunday that the captured enemy drone was only a mock drone used as an enemy drone during the Great Prophet 8 exercises.

On Saturday, IRGC Brig. Gen. Hamid Sarkheili, the military spokesman for the exercises, told reporters that IRGC air defense units had captured a foreign spy drone near the area where IRGC units were conducting maneuvers. The IRGC general added that the forced landing of the enemy drone was captured on video and will be shown publicly is the military commanders choose to. (Fars News Agency, 23 February)

Also on Saturday, Mehr News Agency reported that IRGC had detected and observed the presence of a foreign spy drone observing the maneuvers, but the news agency did not say that the drone was captured.

Now, the Press TV is telling us that the captured enemy drone was IRGC’s own mock drone.

Note: Another PR disaster strikes Iran. On 28 January, Iran’s aerospace organization sends a monkey into the orbit but brings another one back to earth. On 2 February, with much fanfare, the president and the defense minister unveil the country’s new stealth jet fighter, Qaher-313, which turned out to be a mock-up. Yesterday, a senior IRGC general announces the capture of a foreign spy drone, only turning out to be one of IRGC’s own.

The PR disasters of the past four weeks cannot be blamed on government-run press, although they did their part in spreading the lies. There were always government officials making the announcements. The aerospace director holding the wrong monkey, the president and defense minister unveiling a mock jet fighter, and an IRGC general trying to sell us an IRGC drone as a captured enemy spy drone.

The Iranian officials need to revisit their PR strategy; it’s been unqualified disaster lately. When on Saturday, the director of the Atomic Energy Organization of Iran announced the “discovery” of new uranium mines and “plans” to build 16 new nuclear power reactors; the announcements were received by skepticism. Were these discoveries and plans part of government’s negotiation tactics at Almaty? Lack of credibility can only hurt the country’s position.

Photo credit: Mehr News Agency using a Boeing promotional picture for a ScanEagle without identifying it as the photo accompanying its report on Saturday 23 February on IRGC’s observation of the “enemy” drone.
Posted by Nader Uskowi at 8:14 AM

The fun started with Khomeini's face in the moon and keeps on going. If it weren't for the fact that this regime has executed tens of thousands of Iranian men and women (many of them only teenagers) and sent hundreds of thousands of men and boys (some of them as young as 12) to die in a failed attempt to capture Karbala for Emam. And if it weren't for the fact that a country with the 2nd largest natural gas reserves and 4th largest oil reserves has infant mortality and life expectancy figures that are not ranked even in the Top 100 among nations (!), it would all be hilarious. Instead, this Islamist terrorist tyranny is merely a cruel joke.

I think Fars claims that from the very beginning it was always said by Gen. Sarkheili that this was a mock drone of a "doshman-e farzi." I clicked on the link on Sarkheili's quote and it took me to another page of this blog which that one also didn't have a link to any other website outside this one. I wish there was a link to some of those news agencies where you took the initial news from.

I guess that they captured one of their one suicide drones, which chickened out.

The ability to self-correct by learning from mistakes is an absent trait in the IRI leadership.

This regime is proving to be sloppy even when it comes to "propaganda".

The IRGC doesn't realize that the entire world doesn't trust Iran and everything is now considered a lie until proven otherwise.

They should either start telling the truth or come up with better lies.

If I'm not wrong, all those years of various mock stuffs here, are merely IRAN's puzzles with the intentions of dragging the West especially the U.S. and Israel into a state of confusion with its actual military power, might and capabilities. I guess.

Sloppy or not, they did capture a US drone, and all US could do about it was to beg for it back.

Defense reporting here in the West isn't much better. For example, all the claims over the years in reference to the F-35 program constitute a far worse "PR disaster" than confusion over a UAV in an exercise which appears to be little more than a paramilitary rally in the field. At least the Iranian "disaster" isn't costing billions of dollars.

Mark,
Do you think that we should just get used to systematic lying by Iranian Media and stop covering it?

Uskowi blogs state the photo course in each blog, especially when issues addressed are sensitive, I am sure that you know that. If the original photo used by a news outlet in iran is wrong or fake, that doesn't make the subsequent citing of those photos equally guilty of the same lie.

As an anti war activist, don't you think that the Iranian lies and its exaggeration of its own capabilities, including nuclear and missile capabilities, is parallel to the misstep of Sadam Hussein and puts Iran at higher risk of being preemptively attacked by its enemies?!

The Boeing promotional pic was used by Mehr News Agency on Saturday during their report on the spy drone. We are reproducing that image here with photo credit explaining the way the image was used by Iran's semi-official news agency.

The confusion started when an IRGC general, who actually is the spokesman for the exercises, tells reporters hours after the incident that an enemy drone had violated the country's airspace to observe the exercises and was captured by IRGC air defense units. Was the general confused or was not telling the truth, in any case he became the latest official contributing to a series of PR disasters for the country.

That's not the case. Fars was the original source of the news of capturing an enemy drone. On Saturday, hours after the incident, Fars quoted Gen. Sarkheili, the spokesman for the military exercises, as saying that a number of enemy drones tries to enter the Iranian airspace and the one that violated the airspace tried to observe the exercises and was forced-landed by IRGC air-defense units. He added that the video of the capture is on hand and will be shown if the commanders choose to do so. Press TV ran the English version of this news on Saturday.

On Sunday, the IRGC said the drone "captured" was a mock enemy drone. That was the first time the words of a mock enemy was used. Press TV then changed its coverage from a foreign drone to a mock enemy drone, hours after the original Fars report and its own translation of that report. By then all foreign media had reported it, based on Fars original report.

This is not the first time in recent days that the Iranian officials have really fumbled the ball at PR front: the monkey late in January and Qaher-313 non-flying fighter jet in early February.

you are wrong and it's you who is in a state of confusion,sonny. you would do well to get to a point of some small clarity that allows you to do more than to reflexively proclaim the wonderfulness of any and every stupid mistake the the regime makes.

try learning to praise them for their accomplishments and understand that failures are also to be accepted as failures.

I don't recall the US begging Iran for the return of a broken drone, silly person.

You either have a short memory, in denial or haven not read the news. Mr Obama begged the Iranians to return the RQ-170. The Iranians could not comply unfortunately, but instead one of their companies were willing to send a pink toy of the captured drone to Mr Obama.

I believe that Iranian media needs adult supervision as they are getting very close to Debka crazy ladies and nutters at FOX/CNN.

the entire world does not trust Iran?-you mean Israel,USA,and Britain!! -surely these three sisters are by no means the 'whole world'!.it would be prudent for you not to carry the whole world with you in your duty of whipping the regime unjustly!.

I will be kind and help you out.

It is quite interesting that you mentioned the space monkey. It shows that unfortunately indoctrination of the Western media goes so far as to make everyone, even experts on Iran, to believe false news they produce. Here is Guardian on the monkey pleading with reporter to get their facts straight. Also, mistakes happen in news all around the world. To make a big deal of a new agency's gaffe and turning it to a mockery or a powerful country is going a bit overboard.

May this article be a lesson to us:
http://www.guardian.co.uk/world/iran-blog/2013/feb/03/iran-space-monkey

I believe Mr. Fazeli should quit writing for Uskowi on Iran and join one of the LA TVs against Iranian regime. Ethical journalism is not about taking sides and making it quite obvious.

Anonymous 8:18PM Thanks for backing this up. I was away and didn't see those "aghab-oftadeh"ish remarks here. Well, I am glad US's truly democratic journalism, that is Yahoo here, has saved the begging of the drone back. It was quite hilarious: please give our drone back or we are going to be very unhappy about it!

A part of this truly democratic apparatus of indoctrination, after the recent decoded footage of the drone being released by Iran, wrote that the footage "allegedly" is of a US army camp in Afghanistan. The rhetoric is just beyond disgusting — you know what, probably Dr. Fazeli would say Iran has staged an american fort in Afghanistan and then has filmed it and released it as the drone's footage.

Anon 10:49AM, I see that your comment not related to the article doesn't bother president USkowi and other "authors".
Anyway, they are commited and obliged to "double standards" as usually...

I agree. That is really the truth.

My comment from 3:04AM should be adressed primarily to the 9:03AM Anon's comments.

Anon 9:03 AM
Why is that that president Uskowi haven't asked you about relevance of your comments ????