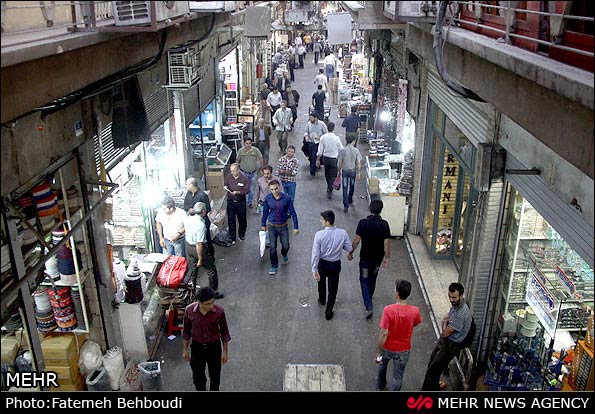 Majlis’ Research Center has published figures that show Iran’s economic growth in the 12-month period ending in January 2013 to be 0.39 percent, Mehr News Agency reported today.
The figure reported by Majlis research center is the lowest rate of economic growth in the region and 164th in the world. President Ahmadinejad has been insisting that the rate was over 10 percent, and his minister of economy had put the rate at 5 percent.
This report also notes that while the Central Bank of Iran had put the country’s inflation in August at 21 percent, Iran had the highest inflation rate in the region.
File photo: Tehran Bazaar (Fatemeh Behboudi/Mehr News Agency)
Posted by Nader Uskowi at 9:04 PM

Contrary to Ahmadinejad's moronic boasts, Iran's economy has been growing at an average of 2-3% annually, as acknowledged by IMF and World Bank. The current low half a percent growth is despite the tightening sanctions and currency devaluation. For Iran to achieve a positive growth rate is an accomplishment by itself as Japan and most of EU are in negative territory, even the US despite clever accounting is barely growing and the UK is in double dip recession or never came out of one. Inflation even high is still below many predictions or South American levels. The economy is readjusting to the new sanctions and will most likely rebound by 3rd quarter as higher oil and gas prices kick-in and demand in Asia keeps increasing. The initial 'sanctions shock" is over and the removal of artificial subsidies has also helped.

Good, then based on your analysis there are not many issues to discuss regarding the Iranian economy: it is growing and the initial sanctions shock is gone, making the current sanctions ineffective! I hope the Iranian authorities do not take the types of your economic analysis seriously and start believing that all is going well and they do not need to change their policies to end the economic calamities facing the country. If they do, the country’s economy will be in deep trouble.

the sanctions are just starting to get serious and the price of oil increasing is only going to benefit countries that can sell oil... and sell it at market prices.

those that can sell at market prices may not include Iran..... Iran is gonna sell less and less oil and is going to be bartering it and discounting it.

Surprising figure, really, given the economic war being waged against the country.

There are historical examples of economic contraction during periods of wartime, which the Iranians continue to duck.

Recent neutral observers returning from Iran report stores and shops continue to be well stocked, and the professor of economic at VA has dispelled the notion that Iran is experiencing hyperinflation.

The big question is whether Ahmadinejad will provide one final cash giveaway to the masses before leaving office.

Anon 9:57.....Remember IMF and World Bank is "Zionist" controlled !
Iran's oil sales is below a million barrels a day and is sold at 40 percent of its actual market value.

Clearly some are gloating over sanctions. Well, let me say this: we no the reasons for the downturn of the Iranian economy.....what are the justifications for the US, EU etc downturns? Who is clever here and who is dumb?

Your comment has proven who the "dumb" one is among us.