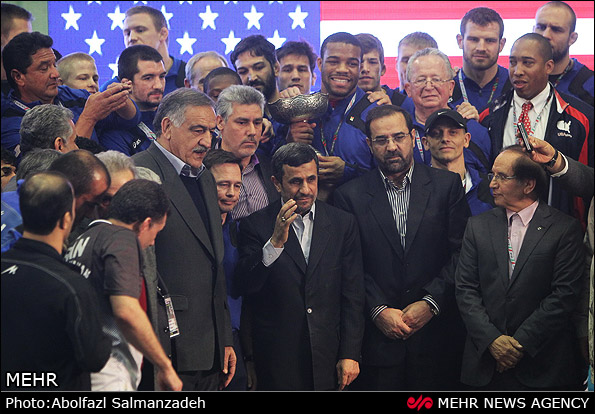 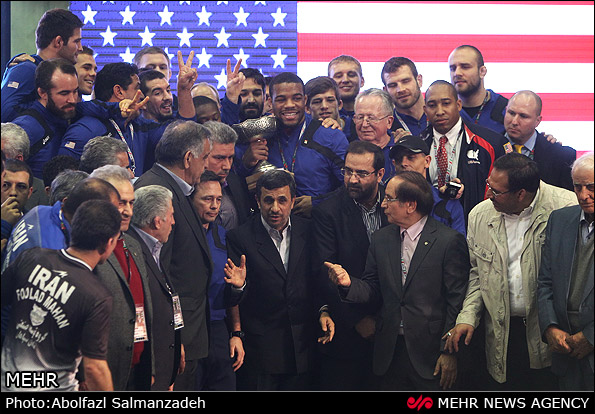 Iranian President Mahmoud Ahmadinejad with the visiting U.S. wrestling team in Tehran. The American flag is in the background. Iran won the freestyle wrestling World Cup after defeating the U.S. and Russia. (Mehr News Agency, 22 February)
Posted by Nader Uskowi at 12:05 PM

Seen these stunts before.The essence of the regime is an anti US/Israel bunker mentality which does no favors for the people of Iran.If the regime comes out of their bunker they will all die in the poison air of freedom and democracy.

With the greeting, the president at least, is bringing back his popularity in the eye of the world. Indirectly, it is a victory to the whole nation of IRAN.

So you mean, IF you breath ISRAEL and the USA THEN you live a healthy life in democratic freedom!!!-you have a mind of a STOOGE !in thinking that the country will suddenly prosper immediately they open the doors for the AMERICANS .

the problem with brainwashed -perfect future stooge candidates like you is that, you can't sustain a logical debate and convince the rational mind with some balanced facts without pushing someone in a bunker! or labeling him a primitive simply because he has some diverse views or wishes to walk away from the shadow of the west or in simple terms be independent!so smoked into western ideals are these people such that anything positive done by the regime is seen as a scandal!- SURELY IT IS THIS GROUP among the human race that know no reasoning!!

the only good thing about them is that they are a minority!!.