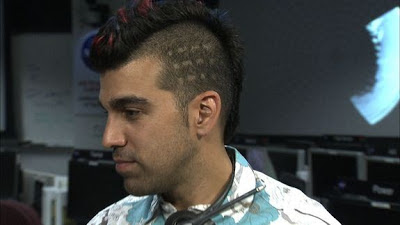 
"The Iranian-American Mohawk Guy — whose name is Bobak Ferdowsi — will sit in the first lady's box to highlight President Barack Obama's call for more visas for skilled immigrants in the fields of math, science and engineering, Southern California Public Radio reported Monday (Feb. 11)."

"Ferdowsi's American flag-inspired hairstyle — a red- and blue-streaked mohawk set off by white stars on the side of his head — rocketed the mission flight director to international fame during Curiosity's nail-biting landing on the night of Aug. 5."

Great news! Congratulations to Babak and JPL/NASA. Great haircut, too.

Photo by NASA
Posted by Mark Pyruz at 3:03 AM

Mark,
Do you agree that Babak would be subject to arrest in Tehran today for sporting this hairdo?

We take such freedoms for granted here in the USA, but Iranians living in Iran can't enjoy these same freedoms thanks to the IR.

What a mess for a so-called "hairstyle". He would look so much better if he got rid of that and instead, got an actual haircut. He looks like Borat if children cut his hair.

That's his choice because he is living in a democracy.Rather his hairstyle than peoples minds filled with garbage by the Islamic terrorizing theocracy.