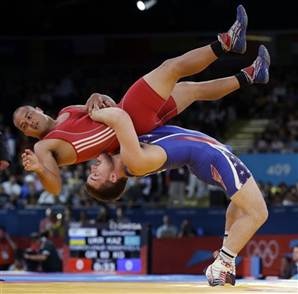 The Bulgarian wrestler, Valentin Yordanov, sent his Olympic gold medal from the 1996 Atlanta Games back to the IOC to protest their decision to drop wrestling from the Olympic Games starting in 2020 (1).

The seven times world champion Yordanov's medal was sent along with a letter to the IOC president Jacques Rogge in which he wrote: "As a sign of protest I am returning my gold medal, won at the Olympic Games in Atlanta in 1996, to the headquarters of the International Olympic Committee in Lausanne,"

Referring to the president of the IOC, Mr. Yoranov said "He unreservedly united Russia, the United States and Iran for a single cause - saving the sport of wrestling, without which the Olympics will never be the same,"

Bulgaria is a wrestling powerhouse and its wrestlers have won 16 Olympic titles.

Iran has beaten the United States in the 2013 Freestyle Wrestling World Cup which is currently underway in the Iranian capital, Tehran, to reach the final bouts of the tournament.

On Thursday afternoon, thousands of Iranian wrestling enthusiasts jubilated at the 12,000-seat hall of the Azadi Sports Complex in west Tehran as they witnessed the host team win over the US squad 6-1 in their fourth group B encounter.

Iran had defeated Japan 7-0, Bulgaria 6-1, and Georgia 7-0 in the morning to reach the afternoon session.

Iran has grabbed the 2013 Freestyle Wrestling World Cup title after beating Russia on the final day of the closely-watched tournament in Tehran.

Good for him; You remove wrestling from Olympics then you should change the name of Olympics as well. Change the name to "World championship in marketable sports". How far we are going to let money to decide our aspects of life? Is there any limit? The IOC has killed the spirit of Olympics by dropping out the wrestling, the oldest sports in the history of mankind.