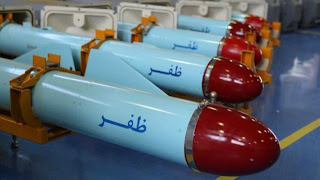 During the test, the missile, mounted onto light speed boats, accurately detected designated targets and destroyed them.

Zafar is a short-range, anti-ship, radar-guided missile capable of hitting and destroying small and medium-sized targets with high precision.

"Zafar" appears to be some kind of subtype from Iran's smaller AShM types, which are based on Chinese types.

There seems to be a ramping up of defense reporting in Iranian media, in the run-up to the upcoming nuclear talks in Kazakhstan.

What is it with this regime that they brag so much about their "capabilities"?

This is good stand-off weapon for the narrow and shallow confines of the Persian Gulf where these small missile boats in large swarming numbers can wreak havoc and even sink carriers with multiple strikes. Hezbollah strike at the pride of the Zionist navy, Hanit with a far inferior Fajr with only one missile had crippled it. Imagine if they had fired a volley of Zafars. This is very good for area denial and mobile asymmetrical warfare. Jagged Iranian coastline with over 2200 kms of coves, caves and hills is ideal for shore based and missile attack naval platforms in the Persian Gulf and beyond.

so silly. the coastline doesn't offer much protection when the skies will not belong to iran.

That is precisely what I have been trying to tell them.But they seem to believe otherwise.

In the interest of "factual" reporting don't you think you should update this post since we now have proof that the clip used here was not from feb 24, 2013, but rather feb 2012?