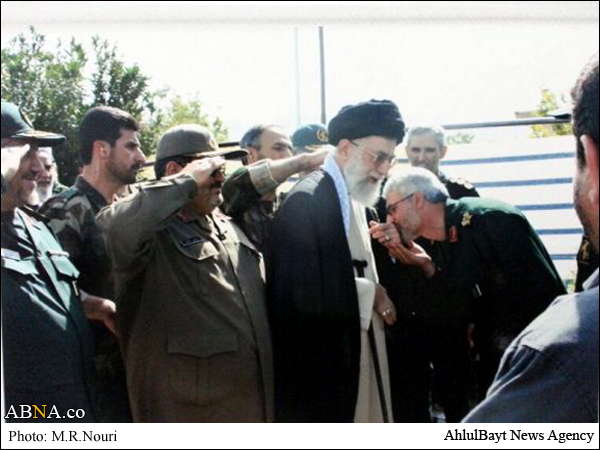 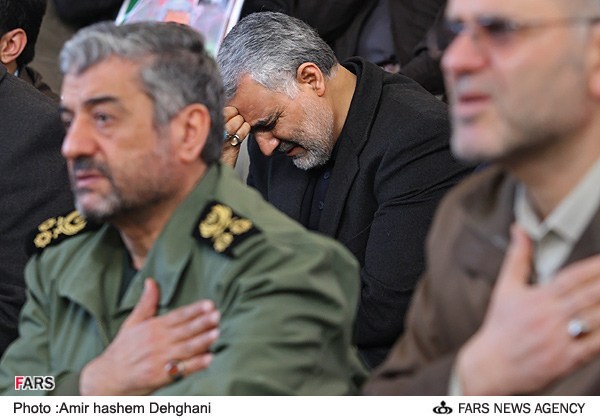 An undated photo of Quds Force Brig. Gen. Hassan Shateri published by mashreghnews.ir, showing the general who was killed during an Israeli attack in Syria kissing the hand of Iran’s Supreme Leader Ayatollah Ali Khamenei.

Major General Hassan Firouzabadi, chief of staff of Iranian armed forces, is shown next to Khamenie, along with other IRGC general officers saluting the kiss!

This one was interesting too:

Now let's hope that they don't do something crazy which make the situation worse than it is, because the general situation does not look good for them - to be frank - and they have no right to gamble with the future of the country (anymore)

Any reactions will most likely be from third parties.

I nominate Firozabadi for the next Syrian mission!

Rest in Peace. A brave man died on the battlefield for Iran's strategic interests.

he didn't die on a battlefield. he died as a spy smuggling weapons into Lebanon

More like confronting Zionist scum in Occupied Palestine. In any case, there are over 500 brigade level officers in the Sepah and the loss of one brave man, albeit sad, will not dent on Iran's policies or strategic goals at home or in the region. You anti-Iran simpletons get excited over minor events. The FACT is that soldiers die in risky operations. Perhaps, you have not been to Beheste Zahra to see the depth and scope of sacrifices of Iran's proud and brave sons.

USKOWI!-with due respect! any significance for highlighting SHATERI kissing the hand of the leader! something that is just a normal sign of deep respect and allegiance!.

Sir, if kissing the leader’s hand by IRGC general officers is proper and a show of respect, then you should not object to republishing the photo that was first published in pro-regime websites. If, however, that’s an inappropriate behavior, then your objection should be addressed to the IRGC. This practice was also common during Shah’s era as a sign of “respect,” and I always cringed looking at those photos.

Mark Pyruz stop hiding behind your alter ego as an anonymous supporter of the regime.
The Facts are this wasn't a minor event because he was one of the dictators closest sardars and was caught with his pants down while trying to smuggle missiles into southern Lebanon.
Those boys that sacrificed themselves for Iran was in the early years of the so called "revolution". But thirty five years later no one in Iran is going to sacrifice themselves for the dictator.When you have a mullah saying that Syria is more important than Khuzestan then you know who the "anti-Iran" really is,the regime and their minions.

The people of Iran remain in the dark,do mushrooms grow better in the dark???

Soon all people of Iran will have NO thoughts, just like B.M.A. & matt.

anon 10:54----- he died confronting no one and he certainly wasn't near Palestine. his sneaky butt was blown up in Syria on the way to Lebanon.


are you attempting an ignorant boast or merely unacquainted with truth?

As usual you seem to be totally out of touch with reality. The murder of Brigadier Shateri was a minor event in the scheme of things. More Turkish officers have died in Syria supporting Salafi terror than Iran has lost in the last 20 years, but no one is gloating. The FACT is that the vast SILENT MAJORITY of Iranians support the government as this will be quite evident in the June elections. This type of Zionist desperation will only increase Iranian determination. If you can read without the senseless Iran-hate, you will find that Russia has openly confirmed that it will continue to supply the Syrian government with even more modern weapons. Iran will simply not abandon Syria as the stakes are too high. After all this excitement is over, Iranians can replace a few IGLA-SA16 manpads without a problem in a matter of hours (Iranian Misagh 2 are as effective). Russia is already sending far more sophisticated weaponry and arms supplies to Syria. In any case, Iranian assistance to Hezbollah simply can not be stopped by anyone. All this fuss also shows the Zionist weakness and fright as the conflict may spread to Golan and Lebanon. The Zionists still occupy 14 sq kilometers of Lebanese land near the Golan at Shebaa Farms. The Syrian story has a long way to go and it will not end in Zionist's favour as they are simply running out of time in the region. Just stay tuned and quit all this anti-Iran hate-peddling as it is not good to stew in it.

If it was "a minor event in the scheme of things" as you claim then why is it the regime is out for revenge?
The "FACT" is you need a tall glass of ZERESHK juice when it comes to your facts.

Mr. Uskowi started this blog with an intent hopefully to solicit rational and intelligent discourse and pluralistic points of views not imbecilic one liners. Unless you have some coherent points, it is rather moot discussing global or strategic issues someone more suited to "special schools" under very serious adult supervision.LOL.

USKOWI you are not coming from ME culture, so you have no right to comment on kissing hands- because you simply do not understand it. Why should any Caucasian think they are better informed and refined than others? In many old ME societies, we kiss the hands of our fathers, mothers, religious teachers as a matter of respect. Why some of us object to kissing the Shah's is because he did not qualify: he was only using it as a tool for power whereas, traditionally, it has never been a power tool.
Get the facts right before you comment.

@tubtuilayka. No,khamenei's hands qualifies to be kissed because he pays people like you to come and spread his Bull crap.

tubtuilayka,without a shadow of a doubt your comment is one of the most ignorant I have ever read on Uskowi.Just continue to slobber the crippled hand of Khamenei who is using Iran as a base to further the cause of Shiite Islamism.For the regime Syria is more important than Khuzestan.I doubt very much if you even qualify to call yourself an Iranian let alone putting your personal scorn and hatred on historical figures of Iran.
You've got your "facts" ass about face and I know which way your head is up against.

These vatanforoshes! Okay, you are living in your Paradise where you are, why care about the HELL?

The vatanforoshes are the ones giving Iran's blood to Lebanon Hezbollah Hamas and saying Syria is more important than Khuzestan.Are you one of those vatanforoshes who supports them?