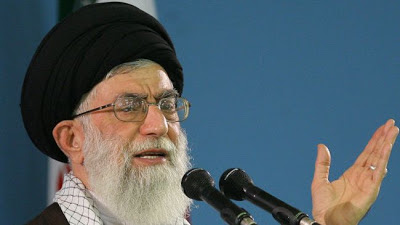 Iran’s Supreme Leader Ayatollah Ali Khamenei said on Wednesday in a major policy speech on relations with the U.S. that the U.S. officials are “irrational” people and their remarks are “illogical.” He added their deeds are also “illogical and tyrannical.” Khamenei called direct negotiations with the U.S. at this time “futile.”

Below are some passages related to Iran-U.S. relations and the country’s nuclear program. English translation of the speech is by Press TV. Please click here to read the entire speech in English.

“They expect others to give in to their illogical demands and bullying. Some do so… But the Iranian nation and the Islamic Republic cannot be forced into surrender. The Islamic Republic has argument and logic; it's capable and powerful. Hence, it will not accept illogical words and actions. In what way are the American officials irrational? A sign that shows they are irrational is the contradictions between what they preach and what they practice.”

“The American officials claim they are committed to nuclear non-proliferation, which provided the pretext for their invasion of Iraq eleven years ago. They said the Saddam regime was developing nuclear bombs in Iraq. They unearthed no weapons in that country and it became manifest that their claim was a lie. They say they are committed to nonproliferation of nuclear weapons. In the meantime, they support an evil regime, which is armed with nuclear bombs and makes threats [against others] with the weapons, that is, the Zionist regime. That's what they preach and this is how they practice.”

“They claim they want to settle their differences with Iran. They have made the claim many times and they are doing so more now. ‘We want to resolve our disputes with Iran,’ this is what they say. In practice, they resort to sanctions and false propaganda. They make inappropriate remarks. They constantly level false allegations against the Islamic Republic and the Iranian nation.”

“In the nuclear issue, the question is not nuclear weapons. The issue is that you want to deprive the Iranian people of an inalienable and undeniable right, which is the nation's right to nuclear enrichment and peaceful use of its domestic capability. Of course, you will not be able [to do so]. And the Iranian nation will exercise its right. You see, they are irrational. The US officials speak illogically. One cannot speak on the basis of logic with an irrational side. They are irrational. Irrational means [one who is] bullying, [one who] talks nonsense. It’s a reality that over the past 30 years we have clearly realized in dealing with different international issues. We know who we are facing and how we should deal with them.”

“… Talks for Americans and other hegemonic powers mean, ‘Let's negotiate so until you accept our demands.’ This is the aim of the negotiations, ‘Let's negotiate so that the outcome of the talks will be you giving in to what you refused to accept previously’… They don’t say ‘Let’s negotiate so that Iran will present its argument and we will lift pressures over the nuclear issue, lift the sanctions, stop security, political and other interferences.’ They don’t say that… They say ‘Let’s negotiate, so that Iran will give in to our demands.’ Well, such negotiations are futile.”

“Yes, sanctions mean pressure. There is no doubt. They are painful. But there are two ways to ease the pain. When weak nations come under pressure, they surrender to the enemy; they buckle; they repent. But a brave nation like the Iranian people, upon noticing that the enemy is exerting pressure, will try to activate its internal forces and cross the danger zone strongly and courageously. And they will certainly do so.”

This is the result of his policy; birthrate at 1,3 means that the iranian population will be halfed in couple of decades ...

It was the biggest mistake of this regime to destroy family planing.Iran is better off with Forty million people.

With the population of 30 mil Iran will be easy prey to all sort of neighbors and other forces; but that is what Islamic republic means in Iran: Genocide - and that is obviously the plan of these terrorists; instead of creating and securing opportunities for the iranian youth, iranian women and iranian culture they hijacked the country for their anti-modern jihad and iranian families have- as these data suggest - no power to carry on this misery anymore; the country is dying away under these terrorists ...

Per my comment on a previous post, a full transcript of this speech was made available three days ago, having been translated by the USG Open Source Center.

It's not all that irrational that people expect Iran not to assemble nuclear weapons, don't trust the lying sonsofdogs in the Iranian government not to do so, and are pressuring Iran to allow inspections to prove that they're not lying this time are lying repeatedly before now.

if Khamenei wants to bellyache about it, rational people won't give a crap.

Like I see, president Uskowi tolerates here comments not related to the Khamenei"s speech..

Is it only Iran that lies? What about your masters?

I've got mistresses, not masters.

Anon 8:35AM, Support western symphaties for gays and lesbians and you will have better birthrates....