Calls for Bilateral Talks with Iran 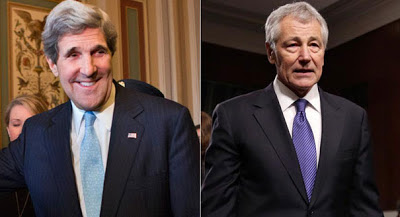 U.S. Secretary of State John Kerry said Iran nuclear talks in Almaty was “useful” and added that if Iran engages seriously it could lead to longer-term, comprehensive agreement. Kerry also said the U.S. is prepared to engage in bilateral discussions with Iran. (Reuters, 27 February)

Note: With Chuck Hagel sworn in as Secretary of Defense earlier this morning, Iran now faces a national security team in Washington that is led by Obama, Kerry and Hagel. If the Iranians ever wanted to resolve their differences with the U.S., this is the best opportunity ever.

The ending of the Almaty talks on a positive note, as reported earlier, and the agreement between Iran and six world powers to meet frequently and soon could indeed be the first steps in ending the nuclear dispute and normalization of relations with Iran.

File photo: Secretary of State John Kerry (left) and Chuck Hagel who was sworn in as Secretary of Defense on 27 February (politico.com)
Posted by Nader Uskowi at 10:30 AM

I agree this is the best Iran will ever get from Washington; but the Mullah Regime with its low IQ is making one mistake after another (while the People are paying the price) and that is why you never know ...

Variables of influence... Iranian elections soon, potential for Syrian al-Assad regime to survive, flock of doves in U.S. administration, semantics > appeasement=diplomacy=containment, Israel unable to 'go it alone' etc etc. EU slipping back into recession is not the time for hot war in M.E. resulting in oil at 200 Euro- certain collapse. Tehran has you by the nads.

"If the Iranians ever wanted to resolve their differences with the U.S., this is the best opportunity ever."

I take it you haven't read "Going to Tehran", Nader. If you had, you'd know all the efforts made in the past by the Iranians to improve relations with the U.S., this penned by former Bush administration national security officials.

The ball is in the Americans court; has been during numerous episodes. It really is up to Obama. It's really a time for leadership. Hopefully he won't shrink from it like he did during his previous term. And how de we know this? By reading "The Dispensable Nation" by a former Obama State Department official.

These two book are required reading for any serious Iran observer. Without reading them, we're left parroting official narratives and newswires.

A diplomatic victory for Iran!. by the way the sanctions are not sending the west anywhere. kudos for the IRANIAN team at the table ,they played their part well!.

Thanks for recommending the book by Leveretts. I have followed their works and read their blog, but please note when I ran a major newspaper in Tehran they were still in school! I say that not as a sign of disrespect, but only to tell you that understanding Iranian politics and Iran-U.S. relations did not start and will not end with the Leveretts.

Folks you have it all wrong. With Kerry and Hagel in place, it only strengthens the iranian government. If the regime was so bold with their comments and actions during the Bush Administration, they will easily walk over the current administration. This administration is not confrontational. In one sense that is great, less likely to get into a conflict. On the flip side, get ready for a stronger, bolder and committed Regime.

And by the way, I am not into blaming game and pointing fingers. Let the historians and academicians who study Iran tell us who was to blame and for what regarding Iran-U.S. relations. The upbeat atmosphere of the talks in Almaty should be seized upon by both governments. They need to move on to resolve their disputes. Good for both and good for the region.

I do not disagree with the notion that the Iranian leadership could misread the situation and overplay its hand. The current national security team in Washington does indeed prefer a diplomatic solution as this post indicates. This is the best moment for both governments to resolve their disputes. They need to seize the moment and move on. The continuation of status sue is not in anyone's favor.

Well politician are not always what they say. A very good example is the former US ise president Dick Cheny who was was once the president of Haliburton before getting into WH and at taht time he was among people in favor of lifting oil sanctions against Iran but after coming into WH he was in favor of War. Another example is Obama himself who was promising a different approach in FP but what I see is the continuation of Bush approach.

As "useful" as a chocolate teapot.

Will this be the beginning of the U.S./IRAN relation? IRAN should be in full knowledge and recognition of whom it is dealing with and be extremely careful and alert always.

Mat, there is ZERO chance of normal relations as long as the Zionists pull the strings. This is a facade as the US is broke and simply can not do much else. Russia, China, India and rest of the Zionist free world are not going to allow another war that will destroy the global economy as Europe teeters and the deadbeat US economy gets worse. Iran's nuclear program is now too advanced for bargaining anyway. Once a nation masters technology then the rest is moot.

So folks let's not have GREAT EXPECTATIONS.