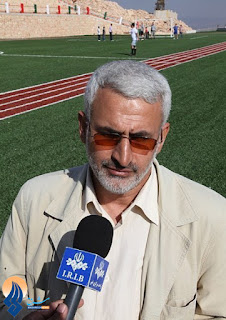 Lebanon’s al-Manar TV today reported that a senior commander of IRGC was killed in recent days in Syria. The television channel run by the Hezbollah did not disclose the name of the slain commander. Iran’s pro-government news website mashreghnews.ir, however, identified the Iranian officer as IRGC Brig. Gen. Hassan Shateri, a Quds Force commander. The website said that the general was in charge of an Iranian agency responsible for “rebuilding Lebanon.”

This is the first time a senior Iranian commander is killed in Syria. The Quds Force is responsible for IRGC’s extraterritorial operations. The organization has also been accused of terrorist activities outside Iran. Its commander, Gen. Qasemi, reports directly to Ayatollah Khamenei, Iran’s supreme leader.

Nader, do you have the link for the mashreghnews.ir article that identifies Iranian officer Hassan Shateri as a "brigadier general" equivalent? I looked and couldn't find it. Specifically, I'm looking for the specified rank in Persian.

By the way, the equivalent U.S. military rank for Qasemi is major general, not general.

And Iranian media claims Shateri was assassinated in southern Lebanon, not killed in the civil war in Syria.

The late Shateri has been referred to as Sardar. The Farsi work for a general officer at IRGC. There are limited number of major generals at IRGC/Quds, and Shateri was not one of them.

Yes, Qasemi is a major general, and we have referred to him as such in the introductory part of this post. However, as in the military protocol, in subsequent referrals we can use the term general, and we always follow that standard. It's like addressing in person a brigadier/major/lieutenant general, you say "general." In Farsi, use the word Sardar for IRGC/Basij general officers, and Amir for regular Artesh general officers.

MAY THE ALMIGHTY rest His soul in eternal peace!!-Ameen

Congratulations to Mossad / Shin Bet / IDF (or the Syrian rebels) if they have done it. Well done. One IRGC murderer less on the planet is always good news.

Don't worry his having a HELL of a time with his beloved Khomeini!

Time for Iran to kill a few women & children to make up for this clean military hit.
Cowards.

enemy is afraid to face iranians,and irgc forces face to face.these are cowardly act ,killing some one on mission to help poor people in lebanon.

Rest in Peace to this brave Iranian martyr.

Are YOU cheering a death of a compatriot who fought gallantly for the Nation in a war?,is leading a humanitarian initiative to rebuild Lebanon ?-AND ARE YOU THE SAME ONE who have been inviting fellow IRANIANS to rise up against the regime and adopt democracy?-WELL!, IF ALL the democracy proponents in IRAN share your line of thinking, then we can understand reason why YOU DON'T HAVE NUMBERS A HOME!!.

@B.M.A. And why may I ask any Iranian should support the very people that imprison,rape,torture and murder their families,loved ones and dear friends?
Don't worry B.M.A the numbers are there and are growing every day waiting for the appointed moment.
Oh and one more thing. Go and get your ears checked because by using caps all the time you seem to be a type of person that shouts at people all the time.
This is considered to be ill mannered and bad tempered of a person and also a good sign of frustration that your opponent is saying the truth.

How about helping the poor people of Iran first with all the stolen money??

If you want to know about "cowardly act" then go and visit the dungeons of the IRI where they rape,torture and murder innocent Iranian citizens in the name of Allah.

May they all rest in pieces so Iran can become free.

BMA Yes I am cheering the death of a terrorist. All highly ranked officers of IRGC are by the very definition of their roles in suppressing the Iranian nation are traitors and terrorists. I do not consider these people Iranians. They are Muslims, like you believing in a Muslim nation "Umma" with Islam at the heart of their ideology which I despise. (Actually I despise all form of religion as an atheist and believe that it is the root cause of all evil on this planet. The fundamentalist American Christians and Jews are the same, hence your mutual msg of killing each other in the name of your respective gods / teaching)

TOTALLY ignoring the positives and benefits and contributions that divine religions have brought upon humanity?