IAEA Fails to Reach Agreement with Iran on Parchin 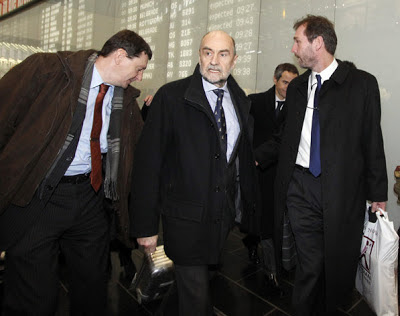 IAEA team in its latest visit to Tehran again failed to reach an agreement with the Iranian officials to restart an investigation into suspicions that Iran might have worked on nuclear weapons at Parchin military site. The team visited Tehran on Wednesday.

Herman Naeckerts, IAEA deputy director who headed the agency’s team that visited Tehran, told reporters that “remaining differences” scuttled attempts to finalize an agreement on how such an investigation should be conducted.

what are these spies doing in my beloved country.

Looks like those "crippling" sanctions finally have those Iranians cowed, oh wait...

EVEN IF IRAN OPENS UP parchin to these officials the story will be same -SOMEONE WILL DEMAND TO SEE A suspected 'UNDERGROUND ENRICHING FACILITY!'.

good to hear IRAN has shown them the indigenous high tech IR2M!.

THE ILLEGAL DEMANDS FROM IRAN NEVER STOPS.IF IS NOT THIS,IS THAT, OR SOMETHING ELSE.A BULLY NEVER STOP BULLYING ,UNTIL YOU HIT THEH RIGHT IN BETWEEN HIS TWO EYES.

THE Iranian leadership does not believe in bulling !.but it has some noble answers to all illegal accusations from those who hold themselves superior!.-SO here is a mind boggling scientific breakthrough in the name of IR2M right before their eyes!!.!.-are you serious that a death cult,rapist regime,can also have some interest in science and technology and make some serious investment in that area?.

BMA stop your propaganda. Theses IR2M are reverse engineered Pakistani / North Korean models and you are ignorant about the IAEA's rules.
Iran as a signatory of non proliferation treaty HAS to allow them any Enrichment facility even if it is an underground one. (Parchin is a military complex and Iran is right in refusing to let IAEA inspectors there)

@so you meant that Pakistan can afford to come up with their own models independently together with North Korea !but Iran is not in that position!the only thing Iranians can do is to 'reverse engineer' !.----this is the problem when you allow your mind to be corrupted and enslaved by the west!!.

@here is how you are shooting yourself on the foot--YOU correctly assert that according to the rule in the IAEA ,it is incumbent upon every member of the non proliferation treaty to allow the inspectors access to any enrichment facility even if it is an underground one!--THIS IS WHAT YOU ARE SAYING AND WE ALL KNOW!-so then-:

1-why do the IAEA insist on visiting Parchin ,a military complex something that is out of its mandate?
2-has the IAEA bothered to do the same to other members apart from IRAN or is the global body entrusted on overseeing nuclear proliferation applying double standards on IRAN in broad daylight?