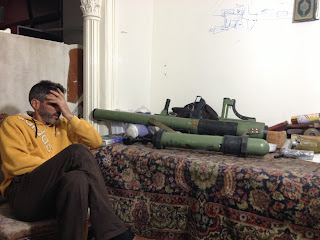 
Ten anti-Tank missiles have been acquired by the Syrian Supreme Military Council, led by Brigadier Selim Idris. Each costs between $20 to 25 thousand. This is a photo of one taken today.

The weapons have been handed over to Abu Ali Sulaibi, commander of the front-line, Saif al-Dawla area of Aleppo. “He lives in the district with his wife, Um Ali, three daughters, a son, and a cat named Sanjoob, or Squirrel,” wrote Ghaith Abdul Ahad. Fifty metres from Abu Ali’s sector, across the Saif al-Dawla Boulevard, an array of shattered buildings is occupied by government troops. They are close enough that during lulls in the shooting they can continue the conflict by shouting abuse.

Why have these weapons been supplied now? Who approved them? We don’t know. It is said that these weapons may have come from Libya and have been sitting in Turkey for some time but approval “may not have been” given for them to be released. It seems that this has changed as of late.

Being funneled through Turkey and of Yugoslavian or Serbian origin, these units are likely sourced through an arms dealer or arms bazaar.
Posted by Mark Pyruz at 7:09 PM

just the smallest indication of what weapons will be put into the hands of those Syrians fighting to end the Assad dictatorship if the slimy Assads don't simply leave.

the fanboy will have to realize that the Iranian theocracy isn't going to be the the only supplier of weapons to the Syrians.

The artickle has been posted 8 hours ago (from what ???), before proxies or authors invented their rubbish "comments"..

These weapons will eventually be used against the Zionists and the west as the looted Libyan arsenal is now in Taureg hands in Mali, Niger and west Africa. The Afghan blowback comes to mind instantly. Syria if it implodes will make rest of the Salafi terror campaigns look like kindergarten. Golan will be the next front. As the stoic Chinese curse "May you get what you wish for"!

AND they are very quick to shift blame to others!!

@ anon February 16, 2013 at 8:13 PM ,its been almost two years and its obvious Assad does not have the intention to leave ,these weapons have thus far created a blood bath only to the determent of the Syrians people , The conflict in Syria is presented as the democratic aspiration of the Syrians against a tyrannical regime ,all the support west is giving to the insurgency is justified in the same context .you are naive to view it as they want you to see it !

leopersica. Don't you worry he will leave alright kicking and punching but never the less he and the regime will be extracted by force.

Highly unlikely considering the global and regional geo-strategic dimensions. Unless there is NATO/US intervention (highly unlikely as it will lead to a major war), Assad simply can not be forced out. He will dig in and fight on. This is the third year and not a major city has fallen to the salafi terrorists. Rational thought is always better than emotional delusions.

Well then you go ahead and live in your emotional delusions.

Correct. At least my emotional delusions are occasionally tinged with a healthy dose of reality and without the benefit of hallucinogens.LOL

Talking of "hallucinogens",have you been taking your glass of ZERESHK juice lately?

I have seen some RPG-29s and lots of 9M133 Kornets being used by the rebels on youtube videos for many months now; these are more deadly than the M79 Osa, so I doubt this ageing Yugoslav at system will change the balance of power much. The real significance of this story is that the RPG-29 and Kornet systems are used by the Syrian military and could have been captured in fighting inside Syria, rather than being supplied from outside the country.

Mehran!-YOU have every ill wish for the regime in IRAN as well as the Syrian leader!!EVEN 'DEBKA FILE' HAVE HINTED THAT THE REBELS ARE RECEIVING high tech arms freely from the Balkans or SOME any other former soviets states!.-i think the real significance of your view is that ASSAD is Loosing -which is painfully the opposite!!.

What are you taking B.M.A ?
Assad is LOSING!
He has lost ninety percent of Syria and is living inside a Russian warship because he is LOSING!
Islamic regime will LOSE Syria then LOSE Tehran as mentioned by Hojjat al-Islam Mehdi Taeb.

B.M.A all I said was that these M79 Osa are not going to make a big strategic difference as the rebels already have better AT systems which have so far failed to defeat the SAA. But you are right to be paranoid B.M.A, your kind are besieged from many sides, get back to trolling, you have a lot of work to do.

@Mehran- sorry sir!. now i catch you-take it easy, it was a STRAY BULLET!.