Salehi: Both Sides Should Be Blamed for Syrian Crisis 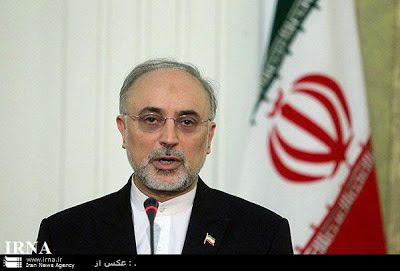 In the strongest sign yet of a shifting Iranian policy toward Syria, Iran's Foreign Minister Ali Akbar Salehi told the Munich Security Conference on Sunday that the blame for the Syrian conflict should be shared by both sides.

“If we want to stop the bloodshed we cannot continue putting the blame one side on the other,” Salehi said. (Reuters, 3 February)
On Saturday, Salehi held talks with Syrian National Coalition leader Moaz Alkhatib on the sidelines of the Munich Conference. In his speech today, Salehi said that he was ready to talk again to the opposition and wanted it to be “part of the solution.” (Reuters)

The Iranians have said early on that they were willing to speak to the opposition, and that both sides (regime and opposition) should communicate with each other to end the conflict. So this isn't a change.

The big change is Iran's role as a regional power broker, in potentially bringing together the two sides.

The conflict is a stalemate, with the country being wrecked.

Blaming both sides for the conflict is truly a shift in Iranian policy. Iran had consistently blamed the opposition, including Alkhatib’s Syrian National Coalition, limping them together with the terrorist groups, and had supported Assad unconditionally. Blaming both sides is a welcome shift in policy, and an assessment more balanced and closer to realities on the ground. The ultra right in Iran will not be happy with the new policy and will do everything they can to discredit it. But Salehi’s remarks show a realistic look at the conflict and Iran can use its position to help start serious negotiations on the conflict.

I agree with your conclusion that the current stalemate needs to be broken, the conflict should end soon, the country cannot be torn apart like this, with 60,000 people killed already. This is a human tragedy likes of which we have rarely witnessed.

That is key. These kind of tragedies do happen routinely in Islam and in communist countries too, we just don't get to witness them...do we???

The FSA have only themselves to blame for being accused of collaborating with the terrorist groups. Their fighters have effectively banded with the Jihadists. The right thing would be for the FSA to lay down their weapons, then return to society and continue life as normal civilians (as many have done without repercussions of any kind), and as for the radical islamist groups - they need to leave and go back to their own countries. After the cessation of hostilites and violence the government can hold a referendum and elections - as called for by the U.N. + Iran, China and Russia.

Thanks. Let me make sure I understand your idea: The FSA disarms and starts their normal life. The foreign fighters disarm and go back to their countries of origin. Assad, whose regime is responsible for most of those 60,000+ casualties, however, stays in as president to conduct the election? I hope the pro-Syrian government forces do not follow your advice because such strategy doesn’t produce peace. Assad’s presidency should and will be part of the resolution to this conflict.

I found it a bit unclear but assume that your last sentence meant that an end to the Assad dictatorship will be part of the resolution.


Of some small interest, I did see a story in Haaretz floating the rumor that the US and Russia are involved with Iran in mooting a proposal under which Iran gives up the nuclear weapons development program in order to get Assad to reform his rule but stay in power.

A mass murdering regime can't be reformed only replaced.