Signs of Progress Toward Direct Negotiations to End Conflict 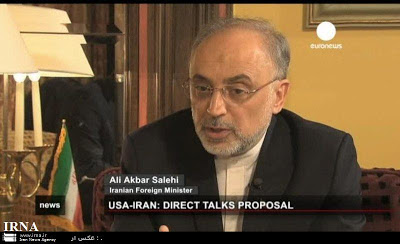 Iranian Foreign Minister Ali Akbar Salehi, attending the annual Munich Security Conference, told Euronews that direct talks with the U.S. could be held if Iran is convinced of good intentions of the Americans.
“This negotiation can only take place when we get enough assurances that, this time, the U.S. comes forward with honest intentions. Because our previous experiences unfortunately have shown the opposite,” Salehi said. (Euronews, 3 February)

Salehi made the remarks in response to Vice President Joe Biden’s speech at the Munich conference offering Iran direct talks aimed at ending the standoff over its nuclear program.
Biden’s offer and Salehi’s response are the strongest signs yet that Iran and the US could restart direct negotiations to end a decade of conflict over Iran’s nuclear program.

Photo: A still image of Salehi’s interview with Euronews by IRNA. Munich, 3 February 2013.
Posted by Nader Uskowi at 5:04 AM

He mentions "good intentions" but he forgets to mention when the regime hooligans broke into and occupied the US embassy for 444 days back in 1979.
He forgets about those "good intentions" when recently regime hooligans broke into the British embassy and wanted to set the place alight.And all because Khamenei's accounts($5 Billion)was frozen in British banks by the order of the British Government.
And another thing "good intentions" starts at home when your disgusting filthy regime stops torturing raping and killing its own citizens all because they want to be free from your subhuman and terrorizing rule.

Yes, we Americans and Iranians can hope there will be good intentions this time around, and that relations will improve.

That hope has been dashed so many times in the past. Bush administration insiders Flynt and Hillary Mann Leverett detail all the times Iran has assisted the U.S. when asked, but that every time the U.S. stiffed Iran for its assistance. And then there was the case where the U.S. couldn't take a "yes" from Iran, when Turkey and Brazil put forward the U.S. offer in Tehran in 2010.

Biden's remarks, from what's been seen seem to suggest just the usual diktat with the expectation Iran will surrender. But we can still hppe this can change.

He acts like a child as if as anyone cares about 'reading intenstions';is he the judge in regard to correct ready of that intention? If you are serious abput diplomay you say Yes to Biden's offer and commit yourself to the prosess and take responsiblitity for its sucess; but the Regime believes that war and the destruction of Iran is an option for them; you see: that is the reason they do not accept the negotiation because destruction of Iran is their Primary purpose any way ...

hilarious nonsense. the intentions of the US and the world are quite clear. Iran is to cease the nuclear weapons development program, submit all nuclear activities to intensive inspections as Iran has obligated itself to do.

Iran can't cease something that does not exist - there is NO evidence at all, whatsoever, of a nuclear weapons program. Until America accepts this fact and changes its policy towards Iran accordingly, all hopes for an agreement is futile. After thousands of hours of IAEA examination, not a single piece of evidence was found; every CIA report agrees and former Mossad directs do, too. But maybe you have some secret evidence we don't know about?

the evidence for declaring that Iran has a weapons development program is accepted by the world, pal, including Russia and China.

pretending that since Iran hasn't yet tried to assemble nuclear weapons means that there's no development program for them is utter rot, and is an untruth that the regime tries to pass off as a truth.

Oh yeah? Then prove it. Russia and China have never stated Iran's nuclear program is a weapons program.

Here's a challenge: "Open your eyes, pal! Everyone knows it!" is not an argument.

The US comes with that proposal in order to "show" that it attempted to make concession and it will try to take an opportunity to make pressures on the Islamic Republic to resurect the opposition's influence from the 2009 year.

you wish to try to explain why Russia and China have repeatedly gone along with sanctions against Iran because of the weapons program?


Joining in against the program is far more sufficient evidence of their positions on the question.