A case of the pot calling the kettle black
By: Jabbar Fazeli, MD


Mohammad Ali Esfanani, the spokesman for Iran Majlis (parliament) Judicial and Legal Committee, criticized Turkey for its crackdown on journalists.

According to the Turkish newspaper Hurriyet (freedom), Mr. Esfanani told Khabaronline in an interview that "Although some journalists in Turkey have leveled criticism against the ruling system of the country, they cannot be suppressed on [the unsubstantiated] charges of being terrorists" (1).

"There are 450 cases of freedom of speech violations in Turkey at the European Court of Human Rights which indicates the lack of freedom of expression in that country" (1).

"Supporting journalists and freedom of speech is supporting democracy, and the Ankara government should take steps in the direction of respecting the rights of journalists and reporters"(1,2).

This comes on the heel of the media watchdog Reporters Sans Frontieres (RSF) report, which placed Iran as the 6th worst in the treatment of journalists (174th out of 179 countries in the RSF press freedom index for 2013), and fifth worst jailer of journalists (3,4).

Based on the RSF report used by Mr, Esfahani, the only countries worse than Iran in the treatment of journalists are: Somalia, Syria, Turkmenistan, North Korea, and Eritrea.

The first paragraph of the RSF report on Iran reads: "Iran is now on the threshold of joining the 'infernal trio' (Eritrea, North Korea, Turkmenistan), the world’s most repressive countries in the domain of freedom of the press. With almost 30 journalists and bloggers in custody, Iran has become the Middle East’s biggest and among the five biggest prisons in the world for journalists" (4). 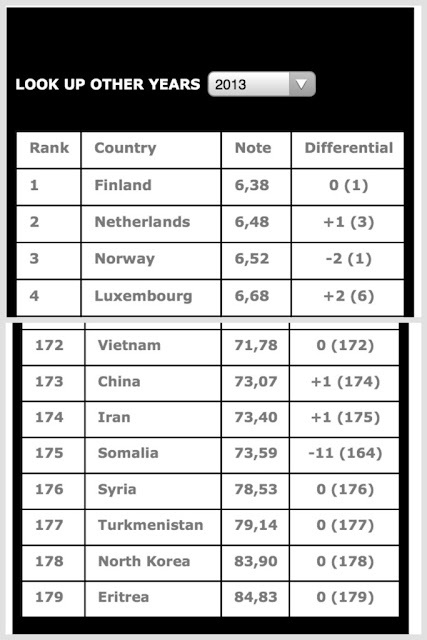 Iran also enjoys the designation of 4th most censored country, according to the 2012 data compiled by the CPJ, the Committee to Protect Journalists (5).

Mr. Esfanani should have taken the time to read the full RSF report before deciding to ignore Iran's own appalling record and skipping to attacking Turkey for its poor treatment of journalists.

Hypocrisy at its finest.I would like to tell that "MP" to go and see the hidden dungeons and torture chambers that the regime he serves has built before he starts fabricating his nonsense for Iranian media.
No one in Iran with any sense believes in these charlatans anymore.

Esfanani is correct that Turkey's government is steadily moving to further erode freedom of the press in the country.

Actually, in this case the Iranian position is correct and fair. The world association of journalists has named Turkey as the most anti-free speech country in the world followed by Saudis and the Persian Gulf petro-pimps. In Turkey, journalists are simply murdered or "disappear". Iran may not be perfect, but in all honesty it has a relatively free and lively press and quite vigorous Majlis debate and oversight. Iranian media is quite unshackled even by regional standards. In all fairness let's not compare Iran with Turkey or with the Zionist entity where an Australian origin Zionist MOSSAD spy was murdered in jail for exposing the Dubai assassination of Hamas leader and then the media gag for 2 years until Australian ABC blew the whistle. BTW, the following story is from Al-Jazeera a "friend" of Turkey and crazy Erdogan, so it can not be discounted as "propaganda".

Istanbul, Turkey - Former Noble Peace Prize nominee Ragip Zarakolu says he's been charged with crimes against the state more than 70 times in his life. But those experiences didn't prepare the Turkish publisher and journalist for his latest stint behind bars.

Zarakolu spent six months last year in a Turkish high-security prison on terrorism-related charges before being released pending trial in April. If convicted, he could spend up to 15 years in jail.

"There was no [physical] torture but without [a real] reason to be arrested, it was torture to be treated like a terrorist. Everyone is looking at you like you're a monster," Zarakolu told Al Jazeera from a café near his home in Istanbul.