India to Barter Tea for Oil from Iran 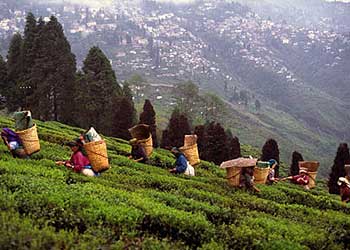 “In March, a tea delegation from India will visit Iran. In August, we will bring a high-powered delegation of Iran Tea Association to the Nilgiris, Assam and other parts of India,” said V. George Jenner, Director of Tea Promotion for West Asia and North Africa, Tea Board of India, told Business Line. (The Hindu Business Like, 1 February)

“We are advancing towards a situation where (the Iranian) association itself will directly import Indian teas and take care of domestic distribution. As India is importing oil, the possibility of a barter-type arrangement with tea is also being considered. The need for Iran to get over the economic sanctions, the option of opening revolving LCs and the foreign exchange equations are to the advantage of Indian tea exports”, Jenner added.
Photo credit: Tea plantation in Darjeeling, India.
Posted by Nader Uskowi at 9:30 AM

So not only are they going to destroy what ever is left of our rice industry but the tea industry is heading that way as well.

Actually it appears that way, doesn't it?

It does,and we can't do nothing about it except to allow our blood to boil.

This is madness! Iran need to recieve hard currency ($$$!) for its oil & gas exports...this is a loosing proposition for the Iranians... What are they gonna do with all the surplus tea?! Stocks of tea that reach to the sky is of no real benefit to Iran?! They have all the tea they could ever ask for thanks to their own domestic producers. The Indians are scoring, as do China, Russia, and so does all other countries that are in the business of trading with Iran. Iran is now akin to a creaky jaded door knob, everyone gets a chance to turn it...!

They used to say before the "revolution" Iran was an import country but at least Iran was producing its own rice,tea,dried fruits,pistachio,manufacturing and exporting shoes and exporting cars buses.
Now Iran has become an import economy because it profits the IRGC mafia.They will destroy the manufacturing base in Iran and leave people without jobs so that they can give miserly handouts to keep the masses dependent on the regime for subsidence.
Not are we not selling our oil for cash but at a stroke we are importing the products that we are already producing to be destroyed and leave us dependent on foreign imports.

good comment...and all the imports that drive Iranian food producers out of business will be controlled the dictatorship's friends and families and hired guns