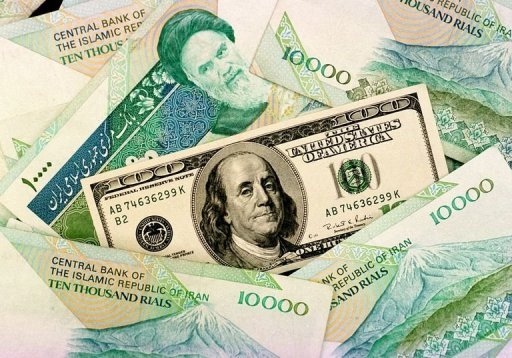 The Iranian government, short on hard currency, and contending with a budget deficit, is no longer able to pursue a policy of injecting hard currency into the exchange market to drive the exchange rate down as it had done in past years.

With the Iranian presidential "elections" approaching, the government is also preparing to spend money it doesn't have in the form of direct cash payments and/or subsidies to 70% of the wage earners, if we believe the latest reports (newspaper headlines below), thus decreasing the Iranian Government's "cash in hand", and its flexibility with regards to controlling the exchange rates in the future. If that holds true then a declining rial and increasing inflation is expected to continue in the upcoming Iranian new year.
One could argue that under the facade of "regime stability" there a simmering dissatisfaction among the public, and some say even the military, due to unpaid wages and rising prices (3). This year's "May Day" is likely to have a new meaning in Iran as a potential day of labor disconnect over unpaid wages and unemployment.

this is all propaganda,enemies sees the election time is approaching and they think they can create another situation.iran has been out of basket of u.s currency for almost 20 years.other words they gave iran currency zero value for last 20 years,now all of sudden start comparing u.s currency value against rials.get real man.what bogus story are you feeding us this time.

Jabbar, it's important to point out there are more than one exchange rates in place during this period where an economic war is being waged against the Islamic Republic of Iran. You're citing the public exchange rate, which is subject to speculation.

For an excellent and neutral perspective on Iran's economy, I highly recommend the views put forward by an expert on economics, Professor Djavad Salehi-Isfahani:

Djavad has recently explained the workings of Iran's countermeasures to the economic war, the different exchange rates in place and the myth that Iran is currently experiencing hyperinflation. Well worth the read.

As for "simmering dissatisfaction", even observers sympathetic to the so-called Greens have come back recently from Iran stating most people over there are fully aware of the source responsible for their current economic situation: it's the countries waging an economic war against 'em. For example, read the recent writings of Jason Rezaian:

One has only to consult his family members in Iran, to be informed about the terrible state of the Iranian economy. Enormous inflation, high unemployment and long queues for subsidized rice. This video, made yesterday, is clear:

Secondly. That article only mentions the awareness of Iranians, who know that international sanctions are playing a huge, perhaps the most, part in Iran's crippling economy, but it doesn't say anything about whom the Iranians blame, which is clearly the Iranian government itself, which is also being confirmed by various ex-officials in Iran who blame the government for the current state.

In the end, whether this year, or this decade, the Iranian system will fall. Whether because of internal dissatisfaction, or external pressure. This regime, ideology and system is doomed.

"are fully aware of the source responsible for their current economic situation: it's the countries waging an economic war against 'em."

Interesting that you posted Dr. Isfahani's link to his website yet stated the sentence above when taking into consideration that Dr. Isfahani claims the primary reason for the Rial's recent devaluation was due to economic mismanagement, not sanctions.

Are you dumb or something? The market standard is the Dollar.Oil is sold at X amount of Dollars.If a government wants to buy grain it is purchased with Dollars because it is indexed at the Dollar rate.
So when the Iranian currency is 40000 rial to the Dollar the market in Iran has far less purchasing power to obtain the necessary products.
This has also a knock on effect on the public seeing their buying power slip further downwards and that despite the government subsidies.
I would say you should "get real" man.

As you know the rate I am citing is the rate that applies to ordinary Iranians and small businesses. The artificially low government rates don't affect the lives of ordinary people and only have budgetary consequences for the government (and only available to big, often corrupt, players). Many would consider the unofficial rate "the true rate" as it reflects the mood of the market and the health of the economy.

Ettelaat newspaper posts all the rates (tiers), including the unofficial rate, on most days and if you look at the other rates posted they almost never change except when the government makes an afford to bring their two other rates closer to the "real" unofficial rate.

Last but not least, when the government of Iran announced that their policy is to equalize the rates they always meant equalizing the official exchange rates with the true market rate and in most cases their only action was to increase the preferred rate (lowering the official value of the rial).

Most Iranians living in Iran are aware of these facts.

Forgive him. He is obviously the reincarnation of his 13:th Emam
Economy is for DONKEYS !!! (That is the level of his understanding of the subject)

to super smart economist above,sky won't fall if rials falls to 50000 rials or even higher, iran is out of u.s basket of currency and banking system.iran offers two rates of foreign exchange one in free market ,one by state,at state rate 25000rials is equal to one dollar.iran can manage its foreign currency exchange trades with even less than 1/3 of present time.iran receive its oil money in dollars,but it trade with other currency ,don't let numbers scare you,be scared, when your national security and your independence is compromised .you micro managing iran economy from american point of view.if this illegal,immoral,brutal sanctions were applied to any other country,they wouldn't last 2 days.iran moving ahead in all scientific fields and surprise the world in a good way every day.elections propaganda won't work,iran managed to survive during 8 years war with total broken economy at $8 dollars a barrel oil.believe in your country ,if you are iranian,unless you are iranian haters and wish the worst for your country.if you don't like the message don't attack the messenger.good luck to you if you are iranian,if not you can go to hell when you bad mouth my country.

this site is a joke,if you don't agree with comments you won't post it.feel proud of yourself,for promoting freedom of speech.you are one of those iranians who keep talking about lack of democracy in iran,but you can even handle an opposing view on a chancy web site,good luck man you are real.

Anon 1:14 AM....You are unreal.So when someone says it as it is regarding the economy in Iran instead of propaganda nonsense,we become "iranian haters"?
Don't worry the regime is already bad mouthing the country without any help from anybody else through its actions.
So for that very narrow minded cowboy attitude of yours regarding Iran's economy I say you can "go to hell" as well.