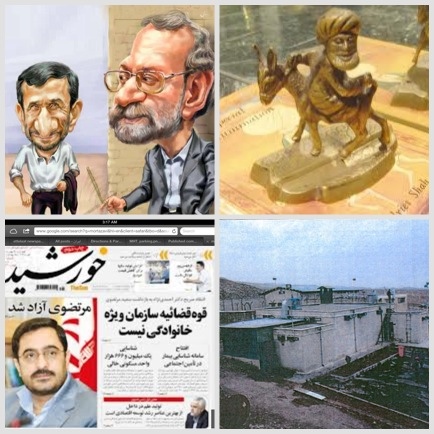 A day after the Larijani-Ahmadinejad public clash in the parliament (majlis), Mr. Saeed Mortazavi was arrested on Monday as he left his office and taken to Evin prison (1,4).

For the uninitiated, I would like to recap why and how Mr. Mortazavi took center stage in the Iranian regime dysfunction on display this week.

After the 2009 Presidential "elections" Mr. Mortazavi was the chief prosecutor who presided over the televised journalist and activists confessions on state TV. He smirked as the opponents of the regime were made to confess to all sorts of conspiracies and wrongdoings.

He was also prominent in the "Kahrizak" scandal, where students involved in the post election 2009 protests were sent to the notorious بازداشتگاه کهریزک kahrizak prison (now closed by order of the supreme leader Khamenei). The 50 inmate capacity detention center took on 140 prisoners in 2009, including many student protestors who were subjected to systematic torture and mistreatment. At least three student died under torture, including Mohsen Rouhalamini the son of Mr. Abdolhossein Rouhalamini, a prominent conservative insider (2). He helped raise the profile of the kahrizak scandal and even confronted the supreme Khamenei during a public event and asked for justice for his dead son.

Mr. Mortazavi's name was prominent in the Kahrizak "parliament investigation" for failing to protect the student protestors and housing them with common criminals during their detention. Mr. Mortazavi is considered the "torturer in chief" by many activists who have for the past 4 years tried and failed to convince the regime to arrest and prosecute him for his 2009 crimes.

In lieu of arrest, Mr. Mortazavi was rewarded for his loyalty to the regime and the Ahmadinejad administration with various government posts ending with his appointment as the head of the multibillion dollar "Social Security Fund", a division of the "Department of Labor" and answerable to the minister of labor.

As part of the recent anti-Ahmadinejad offensive, the parliament (majlis) ordered the labor minister to fire Mr. Mortazavi a month ago. Instead of accepting the directive, the Ahmadinejad government changed the name of Mr. Mortazavi's department from "social security fund" صندوق تأمین اجتماعی to "social security organization" سازمان تامین اجتماعی and put it under the jurisdiction of the vice presidency (answerable to the president only).

Last Sunday the majlis (parliament) reacted by impeaching the minister of labor for refusing to fire Mr. Motazavi, and rebucking Mr. Ahmadinejad for trying to defy the authority of the parliament.

Sometime ago, president Ahmadinejad had apparently persuaded Mr. Mortazavi to invite the brother of his arch rival, the speaker of parliament, to a meeting where he taped Mr. Fazel Larijani trying to secure a favorable financial position in potential corrupt dealings involving a wealthy individual and investment relating to the "social security fund" (3).

As part of his speech to defend his minister of labor before the impeachment vote, Mr. Ahmadinejad claimed to have 23-24 hours worth of damning video and audio recording and offered 25 minutes of edited tape to the parliament. The recording was not audible due to "technical difficulties" and so Ahmadinejad proceeded to read excerpts from the tape during open session of parliament.

The next chapter in this surreal episode of Islamic Republic politics is yet to be written, but it is becoming clear that Ahmadinejad is not willing to take the fall for the failures of the regime. On the other hand, Mr. Ali Larijani (the current speaker of the house) is the apparent "Khamanei choice" presidential candidate for the elections in June 2013.

Ali Larijani's actions against the lame duck president is the closest thing to active campaigning. As a sign of the supreme leader's blessing, the speaker of the parliament had quite a few high profile assignments by the supreme leader, including an official visit to Russia in recent months. He is trying to further build his credentials by criticizing the president and blaming him for the economic crisis in Iran. The attack on the increasing irrelevant Ahmadinejad is also serving to create a positive image for Larijani with the media and the Po-regime crowd.

I should say that I had a headache trying to decipher the infighting and "intrigue" in this Iranian non-story. At a time financial crisis and threat of war, the politcial termoil in Iran seems to be centered around protecting cronies and setling scores using obscure legal and constitutional rules.

I couldn't help but be reminded of an Iranian cautionary tale of Mullah Nasruddin, a wise man, who tries to break a fight between two men and in the process the two strangers steal his blanket. When asked "what was the fight about" he answers "my blanket!".

Iranians might feel the same way as Mullah Nasruddin as they watch the Larijanis duke it out with the Ahmadinejad camp over their "blanket".

In the meantime, Mortazavi was unconditionally released yesterday in Tehran with the government promising to "investigate" the corruption allegations.

I bid $20 for that mullah on a donkey statue!

On a more serious note the regime is heading only one direction and that direction is heading downwards into the bottomless pit of history.

-I THINK the good and positive thing coming out from this latest NEGATIVE story from J.F is-the " willingness" on part of the regime to be open to scrutiny and criticism! .UNLIKE countries like CHINA ,Russia,and the gulf kingdoms where corruption and underhand dealings are kept away from the mainstream media !.-

I think we can view the Government positively for allowing any media house to pick a corruption story from the heart of the government to the public. THIS IS A TENANT OF DEMOCRACY generously practiced by the ISLAMIC republic!!while we know many cases of corruption in the so called 'developed world' that go unreported or subjected to public scrutiny!!.

I hope you don't mind, Jabbar, I copy edited the title of this piece (there appeared a misspelling).

I maintain an open mind where it concerns Iran's elections. (I actually vote in presidential elections.) I'd be interested in reading a point-by-point refutation of Mr. Brill's analysis on the 2009 election, as well as a point-by-point refutation of the election perspective put forward by the Leveretts in "Going to Tehran". To date, no one has satisfactorily done so with citations of actual evidence. Perhaps you're up to the challenge, Jabbar?

Mr. Pyruz could you please substantiate your own claim that 90% of the Iranian populace support the current regime. I've only been asking for about 400 days now. If you cannot provide at least one citation backing up this Saddam Hussein like statistic then I and the rest of this blogs readers will simply have to assume that this statistic you claimed exists was merely another figment of your imagination. Or simply another lie...

@B.M.A....You are nothing but a annoying little fly who buzzes around from cow dung to cow dung then lands on our bread with the dung still on your legs and expect us to eat it.

Mark Pyruz statistics has been obtained from the institute of the hidden imam ministry.

Iddon--- you can ask for 400 years and you're never going to get an answer from that bullspit artist.

he's got nothing but manufactured, dishonest numbers and couldn't possibly attempt to defend them from any scrutiny.

What Mark said was that only 10% of the ppl. want a change in the regime ( whole system ) 60% are saying its better this way than the way iraq and afghanistan were liberated. And 30% are supporters of the regime.

But this is something you will never understand. Because u ppl. just say for over 30 years...next year they will fall....next...next...next...to be continued.... Go ahead Mark....

What about you guys...can you bring some facts about your opinion???

Maybe you can think a little bit about this fact:
Ahmadinejad was in kairo and there were thousands of thousands of supporters and a guy on the street...( you can see his salafist beard very good ) who throw a shoe on ahmadinejad. And you quickly say "ah look there nobody want him" But no US or WESTERN diplomates even dare to think about it to go on the streets in kairo!!!! Think about it. I will pray to God that he will make you wiser to understand this!!!

so you're saying that Pyruz is saying that 70% of Iranians want the whole system changed but that 60 of 70 prefer that it not be done via invasion by a foreign power?