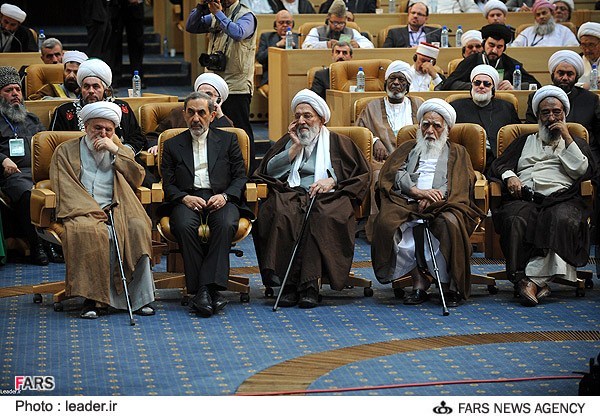 Note: Don’t they seem hard pressed to stay awake at the “Awakening” event?
Posted by Nader Uskowi at 3:30 PM

May be they will "Awaken" when their Abdarchee brings the Chelo Kabab in :o)

The article says: "Don't they seem hard pressed to stay awake....", and has been intending to ridicule another group of the Iranian Republic's establisment.

I would say that, they are blessed to live long lives and have had multiple gifts of wisdoms to share with others.

In author's culture it is apparently a habit to ridicule older people and replace them with those following double standards in their lives, who change "partners" at least couple times during their lives and who follow habits to keep the false smiles, at any times.

Those "creatures" tend to have shorter lifespans and "lot of metal syndroms and stresses" and sometimes end their lives as a certain son of an shah.
That son wasn't apparently sufficiently awaken in that "Land of freedoms and all kind of opportunities".
One of the longevity's means, is a wisdom to be disciplined in one's existence and actions to reach a long and healthy life.

The Eastern culture use to respect older people regardless their appereances as opposing to the Western one, where there were habits (somhere including Greece) to push old and disabled down to their deaths from cliffs, because they might be not awaken enough.

Go and get a life and appreciate some humor!

This was a big win for Iran to get scholars from all over the Islamic world and Muslim global diaspora supporting its position and validating its leadership. Iran has achieved well-deserved respect and influence under the Islamic Republic. LONG LIVE IRAN & THE GREAT ISLAMIC REVOLUTION.

That first row is comprised of seniors. The younger chaps behind them are in better shape and appear attentive.

It's a dead man's party...Who could ask for more? - Oingo Boingo

@A-F...Ha Ha Ha! You seem to suffer from Ohqdeh syndrome regarding the Iranian Royal Family.
I don't think the Iranian people are "blessed" with these blood sucking parasitical mullahs still holding on to dear life.
You are some strange creature A-F :o)

Dead on the money!

Working harder for the Sandist are we?

The "younger chaps" are the ones doing all the executing for the regime.

Clerics at the second and third rows are not Iranians. They are from other Islamic countries in the region.

Most of children have time (periods) in their lives, where they belive their wisdom is above the "older" parents and some older people believe, the same way like a children during all their leftover lives, that whoever is older must not be "sane" - awake enough.

Yossi you waste your time on your dead ideas.

well, in the photo most of the old farts look almost awake.