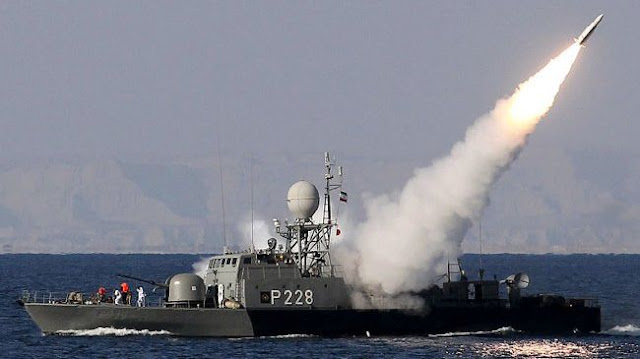 Brig. Gen. Mohammad Hejazi, deputy chief of staff of Iran's Armed Forces, said today the Iranian military is prepared to deliver a swift response to any attempted attack by Israel.

“The Armed Forces are completely ready to act according to what the (Supreme) Leader said in his remarks in the shortest possible time,” Gen. Hejazi sais. (Fars News Agency/Press TV, 15 April)

In its report of Hejazi’s remarks on its Website, Press TV reminded the readers that in his new year message on 21 March, Ayatollah Khamenei had said “Iran would raze Tel Aviv and Haifa to the ground if Israel attempts a military strike against the Islamic Republic.”

“Iran would raze Tel Aviv and Haifa to the ground if Israel attempts a military strike against the Islamic Republic.”

More rug salesman talk. I remember when Iran threatened to shut down the strait if oil sanctions were imposed. It did nothing, and it can't do nothing.

Saddam's pathetic army and airforce utterly destroyed Iranians, whose strongest offensive consisted of tying their young boys together with rope to launch human wave attacks. I could see some rug salesman like Mark lying to the poor naive souls about the paradise that awaited them.

Neither that tactic, nor their bullshit words will have any impact on F16s flying hundreds of sorties per hour.

"F16s flying hundreds of sorties per hour"
Not from israel they wouldn`t be
"Saddam's pathetic army and airforce utterly destroyed Iranians"
Ah,no he didn`t,he spent most of the war on the defensive,he agreed to the un brokered cease fire long before iran did,he gained no territory and he was completely bankrupted,by every standard that mattered he lost and because of the huge debts he incurred in desperation he invaded kuwait and the rest was history
I don`t know if iran can "raze Tel Aviv and Haifa to the ground" but I`ve no doubt that they can inflict considerable damage on israeli military and civilian infrastructure and I`m sure the israelis know this too why else would they be trying to get the us to attack iran for them?

Illegal Zionist entity is a ONE BOMB JOB! PERIOD kids.

The fact is it takes the world's Zionist warmongers of the U.S. and its puppet allies, militarily, for 34 long wasting years of empty 'barkings' against the new iranian superpower. And of course not to mention the head of the tiny Zionist Regime State of Israel. What a poor Israel-made slave of the U.S.!

The president of the great nation of IRAN says the era of the atomic bomb is over. Atomic bombs are no longer useful and have no effect on political equations. Atomic bombs belong to the last century, and anyone who thinks he can rule the world by atomic bombs is a 'political fool'. The fact is what actually with which currently threatens the world is 'IMPERIALISM', not nuclear weapons.

The two well-known political fools are; none other than the world's biggest criminal nations of the U.S. and its life-term master, the Zionist Regime of Israel.