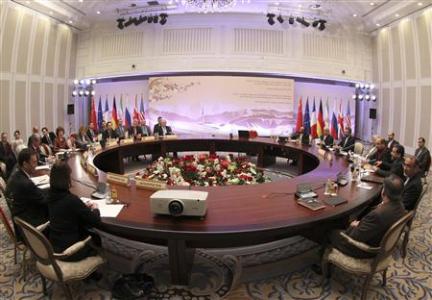 Almaty II Talks between Iran and P5+1 will be held on 5-6 April. The Iranian delegation has already left Tehran for Almaty. But the U.S. and its allies do not appear any closer to resolving the dispute with Tehran. The recent tensions with North Korea, however, give the Almaty talks a degree of urgency.

What is know from Almaty I and Istanbul talks in the past two months, is that the P5+1 has offered some relief from sanctions in return for the suspension of 20-percent uranium enrichment, closure of Fordo enrichment facility and acceptance of IAEA’s additional protocol. Iran finds the Western offers too little and instead has proposed suspension of all sanctions, especially the oil and banking sanctions, in return for accepting the U.S. and Western demands. The Almaty II Talks is to find a way for striking a deal between the two sides.

Meanwhile, EU foreign policy chief Catherine Ashton said in a news conference in Ankara today she was cautiously optimistic over the outcome of talks.

“We go to Almaty ready now to hear formally the response from Iran,” said Ashton. “I remain always cautiously optimistic but I'm also very clear that it's very important to get a response,” she added.
File photo: Iran and P5+1 delegations during talks on Iran’s nuclear program. Almaty, 26 February 2013. (Reuters/Stanislov Fillipov/Pool)
Posted by Nader Uskowi at 1:16 PM

Iran needs to stand-fast and really look at how DPRK has the arrogant and cowardly US and its puppets on their pathetic knees grovelling with hollow barks. These Zionist led cowards only understand one thing: POWER & FORCE. Iran needs to go nuclear in a big way. Ayatollah Khomeini's prophetic words still haunt the Zionists: US CAN NOT DO A DAMN THING. In reality the US is at its weakest and deadbeat bankrupt status now as China is NUMBER ONE is just about everything. Brother Kim would not be making the US grovel unless it had China's full backing and tacit approval. China is baiting the US and increasing costs for the deadbeat US military. Iran is on a winner regardless as Af-pak is getting worse for US, Syria is not buckling, Iraq is closely allied to Iran, Hezbollah is at its peak strength, Egypt-Iran are getting closer by the day, and now to top it all Brother Kim has really shoved his finger deep up the US proverbial. The great Chinese strategist Sun Tzu in his art of war professes a death by thousand cuts and later Mao Tse-Tung in the red book accurately predicted that the US imperialists will eventually be bled to death by over-extension and arrogance. Mao had seen US cowardice in the Korean war in the 50's and then sound defeat in Vietnam. Today's US is a bankrupt deadbeat and would simply collapse.

We are witnessing the slow-motion collapse of the second Anglo-Saxon imperium in less than a hundred years. There was something called Pax Britannica under the reign of Queen Victoria, a truly amazing transcontinental empire without peer in world history. That era was England’s apogee. Then, after the Queen’s diamond jubilee in June 1897, England’s prospects darkened, at first imperceptibly.

Does the average American realize that he and she are being bled dry by their own “elites” who suffer from a similar myopia and arrogance as the blockheads in Whitehall who gratuitously catapulted England into two world wars? Of course not. How could they? It is being kept under wraps. Those whose interests are being advanced directly and indirectly by current circumstances do not want the music to stop. Why should they blow the whistle on themselves? Instead, they go with the flow. Everyone in Washington follows the line of least resistance.

Concurrently, Afghanistan/Pakistan became a battleground and a hotbed of terrorism. It remains a quagmire for American and NATO troops. Meanwhile, as if more problems were needed, Washington policymakers loudly and shamelessly repeat the false accusation that Iran is running a nuclear weapons program.

This is an excerpt from www.PatrickFoyDossier.com.

End of the “Imperium” as claimed, even if a real trend, is a long-term historic trend and cannot and should not act as the theoretical framework for Iran on how to approach the P5+1 proposals in Almaty talks tomorrow. These types of studies are good read to see different perspectives on future trends, but politics here is the controlling factor and Iran needs to be realistic and try to reach the best solution for itself within the confines of the current state of international affaires. Slogans like this is end of imperium and Iran should not compromise with the West doesn’t help Iranian officials much in Almaty.

And now, the world's Zionist of the most evil, arrogant, boastful and bully nation of the U.S.A.(United Satans of America's evil policy-makers. It does not include all those good american people),on the opposite side, has a list of those nuclear-armed states such as Russia, China, North Korea and possibly, Pakistan, to face or deal with, and perhaps, IRAN(which or if in the near future, can no any longer stand or bear the consequences due to those heavy applications of the U.S. pressures of sanctions, threats and bullies, will at once have or be forced to acquire ones)will come next and of course be added to the list.

mat, going quickly through your comments, it seems you have left out few words used previously, and are not using favorite words as often. For example, Zionist, evil, arrogant, boastful and bully were used only once in the first sentence. Is this a softening of your views?

Nader, you are smart enough to realize that the "Iranian nuclear issue" has nothing to do with nukes but Iran's post-revolutionary independent stance. Mat is correct in his analysis, US barking on Iran is about maintaining the arrogant US globocop fallacy and parasitic Zionist hegemony in the Middle-East. The Zionist pip-squeaks squeal and the brainwashed US media jumps on-board with their "Iran will have a bomb in six months" mantra. Sounding like quadruple groundhog days in a week.

The US and its bankrupt and increasingly marginalized toadies will never lift the sanctions. Iran is integrating with the rising Asian powers anyway and US is about to bleed in the Korean peninsula again and this suits both China and Russia. The "trend" is that the bankrupt deadbeat US is stuck on warmongering as 100 million US poor now live in abject poverty and over 9 million US population is on "disability benefits". Harvard university school of social policy estimated the cost of the Iraq war alone at $6 trillion and counting and rising impact on US poverty at the same level as the 1960's as American incomes have been steadily declining and manufacturing jobs disappearing.

All these tensions and pathetic attempts to militarize every issue has literally bankrupted US is a mere 65 years. Dr. Emmanual Wallerstein's prophetic study at Yale aptly named the Eagle Has Crashed predicted this at the time of Afghanistan invasion in 2002 and subsequent quagmire.
www.foreignpolicy.com/node/71622

The respected Yale scholar Immanuel Wallerstein declared in the early 1980's that the United States was in irreversible decline due to its lack of focus on homefront socio-economic implosion and a total militarization of its society and increasing police state and violence both at home and abroad. 9/11 and the repeated miscalculations in Afghanistan and Iraq simply accelerated US decline and economic malaise as power shifts to Asia, particularly China were afoot as early as the 1980's. Now this process is irreversible and China is increasingly assertive. The recent sabre-rattling on the Korean peninsula simply could have happened without tacit Chinese support for DPRK.

Jul 1, 2002 – The Eagle Has Crash Landed. Pax Americana is over. Challenges from Korea and the Balkans to the Middle East and September 11 have bogged the US into an endless morass while economic power shifts to Asia.

These are serious studies and not merely trends. The Iranian-US antipathy has to seen in the light of US decay and dying breath as a hollow superpower armed to the teeth but with a bankrupt economy and decaying society. US is like a drug crazed teenager with a shotgun, wild and inherently unstable.

Iran like DPRK should go openly nuclear and test a nuke. By all estimates Iran became nuclear capable in the late nineties. Iran has enough fissile material for at least a dozen nukes. Why do you think the war crazed US and its puny Zionist pup have not "attacked Iran"?

And you are smart enough to realize that your argument is not with me but with the Iranian government. They are the one who keep saying that not only they have no intentions of building the bomb, but the act is actually anti-Islamic. Unless you accuse them of hypocrisy or telling lies, you are opposing their policy and I am glad that an unsolicited advice like your last sentence does not fool them into following the desperate and reactionary North Korean model. They are smarter than that, or so I hope.

Actually, Sayyed Ali Khamenei who is not prone to loose talk or western style hyperbole more or implicitly declared Iran's nuclear status when he warned the Zionists about severe retaliation and the razing of Haifa and Tel-Aviv hovels if Iran is ever attacked, these are far from Palestinian neighborhoods. In other words 10 kilotons would do the job on the Zionist entity. Reading between the lines takes a subtle finesse. The DPRK model of invincibility is not lost on anyone.

Interesting and disturbing that some pro-government commentators are starting to advocate building nuclear bomb, and advocating the threat of a nuclear attack on Israel. With North Korea as a model. And attributing it all to Khamenei. Let’s hope they don’t know what they are talking about.