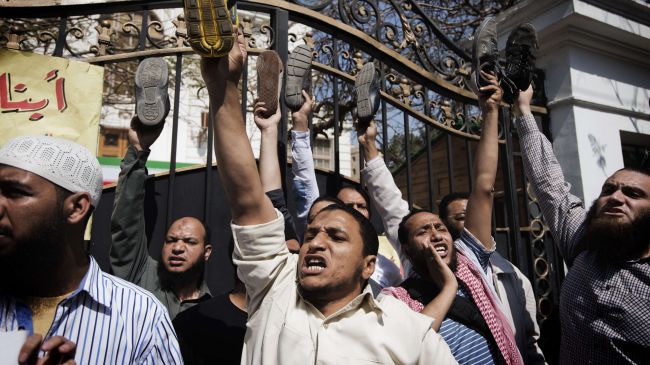 A crowd of protesters attempted to scale the walls and break into the residence of Iran’s charge d'affaires to Egypt, Mojtaba Amani, in a suburb of Cairo on Friday, Iranian media reported today. The police blocked the protesters from storming the building.

Photo credit: A crowd of protesters outside the house of Iran’s charge d'affaires to Egypt in a Cairo suburb, April 5, 2013. (Press TV)
Posted by Nader Uskowi at 9:00 AM

OF cause there were 40 salafists protesters doing a protest on the embassy showing their reservation in the warming of ties b/tween Iran and Egypt!. a normal in-house dispute in the Muslim world!.

Just to clarify (I can't say why these details have been left out):

These are Salafi extremists demonstrating against Iran, Shias and the Muslim Brotherhood; in support of armed Jihadis fighting in Syria and Iraq.

These nasty Sunni Islamists should not be mistaken for the nice Shia Islamists who take hostages, bomb embassies, kidnap people, chop off limbs, administer lashings, rape and execute young women, assassinate political opponents, hijack planes and engage in other forms of cute and cuddly Islamist behavior.

Rent a freak-show of braindead Saudi/Qatari paid Salafi/Wahabbi rent a mini-mob of 30 idiots with freaky stinking beards and worn out smelly sandals. If this is the best the Khaleeji Arab puppet pimps can do than there is really no danger to Iran-Egypt ties.

yeah all of that is true, but Shia-approved stonings are way down and Iran is only harassing Nobel laureates and not torturing them or treating them like novelists and demanding that they be killed.

"Shia-approved stonings are way down". Progress!

"Iran is only harassing Nobel laureates and not torturing them or treating them like novelists and demanding that they be killed." Are you suggesting that the Islamist regime does not imprison, torture, and even murder Iranian journalists, writers, bloggers, etc for saying or writings things that the regime disagrees with?

Of course B.M.A these are your type of pals :o)

Do you happen to know if these "braindead" Sunni Islamists receive Sandis like our own "freak show" Shia Islamists? Please advise.

oh, I'm not saying that at all.

I'm merely pointing out that the regime hasn't yet gotten around to torturing her and so far have only removed her from her judgeship because she's not a man, harassed her, vandalized her offices, removed her documents, threatened to imprison her lawyer, threatened to imprison the lawyer's family when the lawyer ran off and generally acted like the slimy worthless people that they are...but in a restrained mode.

Can't disagree with you. But "Zionists" are not the ones that are imprisoning,raping,torturing and murdering the Iranian people.Instead the occupying Shiite smelly scumbag regime is the one doing so.

I am glad we agree that the Zionist scum are plundering the whole world by greed, fiscal scams, genocide, land theft, killing kids in Occupied Palestine, organ harvesting and literally destroying the very shaky deadbeat and bankrupt foundations of US by incessant warmongering.

O.K. now can we classify these people as Zombies so we can shoot them...

I'm not concerned about those supposed "Zionist" acts.But what concerns me and others are the goings on of the deadbeat occupying anti Iranian entity that is raping Iran blind and leading it to bankruptcy and daily organ harvesting and hopelessness of the downtrodden Iranian nation.