No Agreement Reached with IAEA for New Talks: Iran 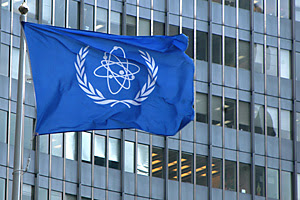 Iran has dismissed reports about an agreement reached by Tehran and the IAEA for a new round of talks, Press TV reported today. An official source close to the Iranian negotiating team told Press TV on Friday that no agreement had been reached.

On Thursday, the Associated Press quoted anonymous diplomatic sources as saying that Iran and the IAEA had agreed to hold new talks in mid-May. The two sides last met in Tehran in mid-February.
IAEA’s ability to inspect a suspected nuclear unit within Parchin military complex has been the sticking issue, with Iran insisting that such visit should be part of a comprehensive settlement with the country over its nuclear program

File Photo: IAEA headquarters in Vienna (iaea.org)
Posted by Nader Uskowi at 9:03 AM

There will be no any agreement or solution reached as long as the world's most evil nation of the Zionist's Regime of Israel is still exist on the surface of the earth. What a sad Israel-made slave of the U.S.!

How many years and how many ("S.Hussein") palaces the IAEA will need to inspect before making a final conclusion, or renew its claims that the Iran doesn't cooperate because israel said so.

Are the IAEA going to insist that children and all family members of scientists have to be interviewed and maybe also in safe locations (outside the country), as well?.