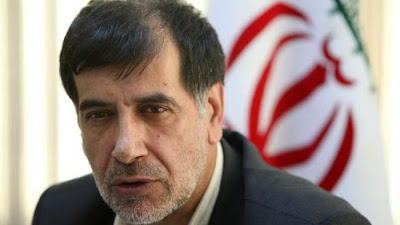 The Guardian Council is a twelve-member body composed of six clerics appointed by Khamenei and six other Islamic experts elected by Majlis that can disqualify any candidate for elected office, including presidential candidates, on charges of anti-Islamic views or behavior without being required to offer any specific reasons. But Khamenie can reverse the Council’s ruling and let the disqualified candidates participate in the election.

Bahonar also said if Mashaie is disqualified by the Council, Ahmadinejad will not be able to postpone the election.

“Ahmadinejad doesn’t have the ability to challenge the regime,” bahonar said. “People more powerful than Ahmadinejad wanted to postpone previous elections, but were unable to do so.” (IRNA, 10 April)

Bahonar did not specify who in the past tried unsuccessfully to postpone any of the elections.

Axis of (reactionary) Resistance can not jump over and short-circuit Democray anymore: Anti-Americanism does not make you attractive in the arab street anymore - I guess:

Sunni Hamas has broken its longtime ties with the Assad regime to fight alongside the predominantly Sunni Syrian opposition.

Anno April 10 2013
only a israeli post together hamas and iranian election.
Israel is not a democracy, israel is notg a real country
source of all evil

The real danger for the region is that Syria falls in to the hand of al Qaeda; the danger is real and I would not dismiss it as some form of conspiracy; in that case the region would take a turn for the worst:

This article is related to Internal politics and has less to do with Israel or Syria...No matter if Mashaie is good or bad the fact he can be disqualified to run is a testimony how less democratic and free the election cycles have become; This disqualifications will at the end hurt the participations and hurt the regime more.

Again the problem of Khamenei is that his candidates are less popular than those of reformists or Mashaei; maybe Ghalibaf is more popular but I do not know how Khamenei does think about him; Khatami against Mashai would be an intersting duel; but the regime does not want to open up the space for competition because it is scared of everything ...

The real question is what do they want to do after the election? Do they understand the need of change of reform? Or do they want to continue like this. their foreign policy does not yield any results for the country anymore; that must change.

The regime could not even deal with Mousavi as a candidate, the results of 2009 election was the regime losing even more popular support than any other single event in past 30 years. With every election cycle, the regime, tightens the screws even harder in name of security but in process generates more disenfranchised and in reality losing more grip even among the very religious part of the society. No one likes farse elections run by a mindless, illogical dictatorship, not even the supporter of the regime have serious issues.

Well in this present moment Israel would be a far better place to live in than the evil and despotic Islamic theocracy.Israel is as real a country as any other because it more than earned it.The only source of evil emanates from your mind.

Another of Khamenei's bearded baboons pretending to be an "opponent" :o)

More Zionist BS and nothing to do with reality as usual. Just organ harvesting Zionist pups deluding themselves.

Not dealing straight with the problems and just ignoring them and attacking anyone that dares to eb=vene make a small criticism is show of weakness and weakness usually means ultimate failure in this life. Instead of calling everyone zionist fix the problems.

The anarchists and revisionists use to strive usually in big cities, because these are the easiest places to incite unrest and "magnify" its significance and claim of "majority".

Present existence of different trends in Iranian politics, which sometimes are criticized or ostracized, is sufficient to be characterized as an representation of the nation majority.

Mr. Mousavi had made mistakes, similar to those of Boris Yeltsin, where in short period of time crooks and foreign entities' operatives could (run) prevail over his (Mousavi's) naive intentions.

If sincere, present competition between Mr. Ahmadinejad's camp and other factions of the Islamic Republic 's political system, renders an healthy outcome for a prospect of the Iranian future.

The western proxies don't need apply...(their sicknesses) in that matter.

Is it somehow related to the article, or president Uskowi lets double standards for its constituency ???

As usual seems like more BS from you :o)