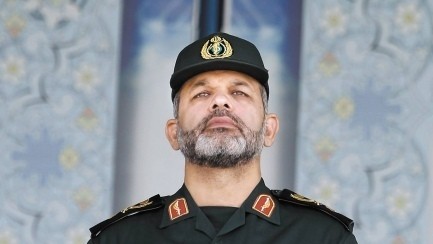 Iran’s Defense Minister Brig. Gen. Ahmad Vahidi said today during the National Artesh (Army) Day that Israeli threats against Iran are worthless and Iran is capable to “raze Tel Aviv and Haifa to the ground” if attacked. Vahidi was echoing the threat against the Israeli cities that was originally made by Ayatollah Khamenei in March.

“The constant threats by the Zionist regime against Iran are worthless, and they cannot do anything against our nation because they know that any measure will lead them to full annihilation,” Gen. Vahidi said. “They know that if they do a damn thing, the Islamic Republic will raze Tel Aviv and Haifa to the ground.” (IRNA/Press TV, 18 April)

Iranian Army Commander Major General Ataollah Salehi also said during the Artesh Day that if the Israelis try “to commit a folly and implement their threat against Iran, we will not hesitate” to respond.

During Israel’s Independence Day celebrations on Tuesday, Defense Minister Moshe Ya’alon and IDF Chief of General Staff Benny Gantz said Israel could defend itself against any threat, and — if it needed to — would also act against Tehran’s nuclear program. (The Times of Israel)

“The Iranian challenge is very significant and we must approach it with a responsible long-term strategy. We will do what is necessary when it is necessary,” Gen. Gantz had said. (Army Radio/The Times of Israel)

The Zionist Regime State of Israel, militarily, is too little and far from reaching in taking on such a hughly great nation of Islamic Republic of IRAN. Doesn't the Zionist Regime really realize it?

doormat is so utterly ignorant that he doesn't understand how clownish are these assertions.

That being the zionist regime. Living by racial hatred of middle eastern peoples.

No that implies to people like you and the anti Iranian regime that you support.

The little Zionist scum entity on stolen land is a one-bomb job. PERIOD. and they know it and hence Zionist pups barking!

That's the gaze of a boss, it radiates alpha, pure and simple.

“Israel’s leaders sometimes threaten Iran, but they know that if they do
a damn thing, the Islamic republic will raze Tel Aviv and Haifa to the
ground,” Iranian supreme leader Ali Khamenei said. This rare statement from the normally very cautious Ayatollah is a unique admission of Iran's confident and growing retaliatory capabilities.

On April 16, Iran said it fired a new ballistic missile in the Gulf. The
Defense Ministry said the land-to-sea missile could destroy any warship.

“The Defense Ministry has been able to test a new missile in the Persian
Gulf that has a high ability to hit targets,” Iranian Deputy Defense
Minister Majid Bokaei said. “This new missile, which has been equipped with
a surface-to-surface missile system, exits the atmosphere after being
launched, re-enters it at high speed, and completely destroys the target
vessel or warship.”

mat and his type of ilk are deluding themselves into thinking that being "little" means being weak.

No,that's a gaze of a nutcase who like you lives in his delusions.

It's yourself having the period.

no, son, it's not confidence. it's a pathetic attempt to convince israel that Iran will have it's Arab puppets in Lebanon do the fighting for the hapless bunch of semi-competent and semi-brave Iranian theocratic thugs.

it's pathetic drivel and not going to convince anyone other than the regime's supporters.

5 million imported Zionists strutting on deadbeat US taxpayers funded weaponry simply won't last one week in a no-holds barred war with 82 million Iranians. Zionism is all about bluff, bluster and self-deluded lies. The only thing the Zionist scum can do is to goad a decaying and paranoid US into a swan song war. However, US is imploding and highly unlikely to be sucked into a final suicidal war in the Muslim world.

That APPLIES TO anti-Iran zionist regime people like you, Anon 9:02 PM. A regime whose Interior Minister Eli Yishai said that israel is for "the white man.", where African people are compared to baboons on state television and segregation exists on buses (60 years after Montgomery). It is well known how much hatred zionists have for Arabs and Iranians.

They couldn't even defeat Hezbollah. When the zionist regime is on its own it's nothing. What Iran should be worried about is the US joining them in any military action. Although, I believe in long run that will destroy the US more that it will damage Iran. Already Iraq is the second Vietnam and Iraq's capacity to stay as a nation in arms against enemy was nothing compared to Iranians, notwithstanding their ability in asymmetric war which will bring the US to its knee after a couple of months.

Nonsense! You suffer from inferiority complex.Until the Islamic terrorists took over Iran Israel had no problems with us.If anything Arabs hate Iranians more than they hate Israelis.You typify the Islamic terrorist regime when they always try to compare Iranians to Arabs,Palestinians or "Montgomery". You are not Iranian that's for sure! By the sound of your tone it seems you could be B.M.A . Go and receive your free Sandist juice or Cool Aid :o)

Live in your little delusions !

What a limited ability to think, if you really believe I could be B.M.A . The paid to shill for israel hasbarats don't fool me. The burning hatred that zionists have for non-zionists and non-white people, is well known. It is a fact that the zionist regime's Interior Minister Eli Yishai said that israel is for "the white man." It is a fact that that many zionists hate African people and practice racial segregation on buses. Their hatred for Iran and Iranians is clear for the whole world to see.

US economy is in tatters and it is perpetual self-destructing auto-pilot with gun-violence, false flag alCIAda "terrorism', millions unemployed, homeless and 100 million in abject poverty and living on pittance foodstamps while China rules the roost. The US could not even face DPRK and had to back-down and suck eggs, let alone Iran and energy superpower with 82 million people and the capacity to bring the global economy to its knees. US is a hollow braggart and 100% evil but not totally stupid, despite Zionist media brainwashing of the braindead rednecks, and will never engage in a suicidal war with Iran at Zionist behest. US domestic problems and economic malaise are only going to get worse along with its paranoia and its Islamophobic hate-peddling. Like Communism destroyed Russia, Zionism is destroying US.

thank you Anon 7:52 for a clear demonstration of idiotic propaganda parroting.

you don't have a freakin clue about anything in the US if you think that 100 million US citizens are living in abject poverty.

so ignorant, so dumb.

To the resident idiots and hasbara lies notwithstanding:

In November 2012 the U.S. Census Bureau said more than 16% of the population lived in poverty in the United States, including almost 20% of Americans who could not afford basic food or health care.

Census figures released in September 2012 reveal record-high numbers of people continue to live in poverty in the United States. In a survey of 35 industrialized economies, the US ranked 34 out of 35 in child poverty.

Map: How 35 countries compare on child poverty (the US is ranked 34th)
Washington Post (blog)‎

Lollipop boy blame the Zionist Wall Street Journal and not me for the bad news and a whiff of reality. Now go hide under the bed, the terrists are coming LOL.

A record number of Americans are using food stamps, known today as the Supplemental Nutrition Assistance Program (SNAP). Despite official proclamations that the recession has ended and an economic recovery is underway, families are turning to SNAP benefits in record numbers. The working poor comprise a growing number of food stamp recipients, and about half of those receiving benefits are children.

Enrollment in the food stamp program has increased by 70 percent since 2008, to a record 47.8 million people as of December 2012, the Wall Street Journal reported Thursday. The biggest factor driving the increase is the stagnating job market and a rising poverty rate. This means that a staggering 15 percent of the US population receives food stamp benefits, nearly double the rate of 1975.

Once again rubbish.What the hell has African people got to do with Iranians? I know Israelis and they don't hate Iranians. In fact they respect Iranians because there are tens of thousands of Iranian Jews who live in Israel.I would say the "hatred" is only in your very limited small mind and in those occupying Islamic terrorists in Iran.

Strange,even the regime in Iran has said that a staggering 70% of the Iranian population live below the poverty line.They even banned the advertisement of poultry on television.I would say there are some IRI Groupies whom live in the West and are in denial regarding Iran's bankrupt and decrepit economy.

OK so 16% of the US population live in poverty.At least there is some hope and promise in that country.
But in Iran according to the IRI media 70% of the population lives below the poverty line and continuing to grow.And in Iran Iranians have lost all hope in any improvement to its economy. And if they could afford it,leave the country.
Maybe that's why you are living in the West and spouting your nonsensical drivel on behalf of the IRI Groupies?

try learning the great difference in the why that poverty is calculated in the US than in most of the world.

as well, understand people in the US get food stamps while their income is ABOVE our poverty level.

Dream on and keep truckin!

African people are an example to demonstrate the fact that zionists live by racial hatred. To zionists, Iranian people are just another category of non-zionists and non-white people, for them to hate.

AnonymousApril 21, 2013 at 12:55 PM: "I know Israelis", now there's a surprise! Proof that the anti-Iran commenters here are hasbara activists, paid to shill for israel.

Anon 7:27....Maybe you're of African heritage but the Iranian people are of Caucasian heritage therefore your arguments doesn't amount to a single bean.
Seems like you're the one living by racial hatred.

In other words, you're unable to deny the facts that zionists are racist and the zionist regime practise racism. That's clear for the whole world to see.