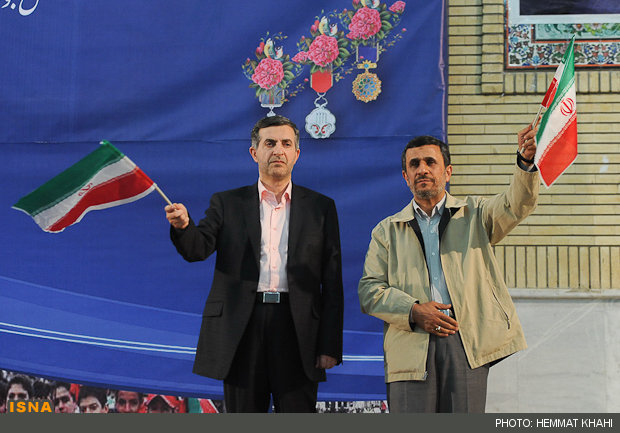 Iranian President Mahmoud Ahmadinejad told a large gathering of young people in the central city of Semnan on Thursday night that the country is in need of “radical reforms.”

“We cannot deal with the present dangers facing the country without major initiatives and radical reforms,” Ahmadinejad said. (ISNA, 12 April)

Ahmadinejad introduced his top aide and handpicked candidate for the presidency, Esfaniar Rahim Mashaie, to the audience amid their thunderous applause. The event had all the markings of a campaign rally, with Ahmadinejad and Mashaie on stage together waiving Iranian flags.

The right has fiercely opposed Mashaie for favoring the Iranian identity of the nation over Islam, and flag-waiving events add to their fears. A public opinion poll conducted by ISNA that was published yesterday showed Ahmadinejad and Mashaie team enjoying 41.3 percent of popular support. But the Guardian Council, a body of 12 clerics and Islamic jurists, half of whom are appointed by the supreme leader, could reject Mashaie’s candidacy for president.

Well I do not know, if true that Mashaei has 41 % support there is no way they can reject him; at the end regime needs some ideological reorientation; because after Sunni awakening in Arab countries they can not get away with the pretence to represent the whole Islam as such; if there is a need for antiamericanism in the region the Sunnis have now plenty of alternatives among themeselves

I don't support the Ahmadinejad clique, but I do support replacing Islamism with Nationalism. Iran needs a Gorbatsjov moment, the Islamic Republic must be dismantled peacefully, Iran can't afford another revolution.

Mashaie is mashed as has no real chance of winning anything. The next president will be a stable establishment figure as Iranians are tired of these wingnuts like Ahmadinejad and "reformers". Stay tuned and READ MY LIPS.

Are you being serious? Who is this joker?

I believe you are right. I think most Iranians, even those who once strongly supported the reformists, now are more than happy to vote for a technocrat who can better their economic situation. I believe Ghalibaf has a lot of chance of winning this election, if Rafsanjani and Larijani let him run.

They are all bearded anti Iranian terrorists :o)

Islamic regime cannot be dismantled peacefully.They are the harvesters of death and misery which will eventually lead to their own sudden and catastrophic demise.