Rouhani to Run for President 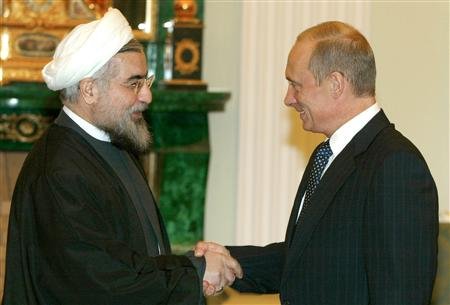 Hassan Rouhani, 64, former director of Iran's Supreme National Security Council and chief nuclear negotiator under presidents Rafsanjani and Khatami, today announced his candidacy for president. Rouhani told his supporters in Tehran that his administration will normalize the country’s relations and end “quarrelling.”

“We need a new management for the country but not based on quarrelling, inconsistency and eroding domestic capacity, but through unity, consensus and attracting honest and efficient people,” Rowhani told said.

“My government will be one of prudence and hope and my message is about saving the economy, reviving ethics and interaction with the world,” Rouhani added. “Inflation is above 30 percent, the reduction in the value of the national currency, unemployment and zero economic growth are among the country's problems.” [Mehr News Agency, 11 April]

By emphasizing that his administration would reduce tensions and normalize interaction with outside world, Rouhani differentiated himself from other declared candidates on topics that are closely linked to the economic challenges facing Iran due to sanctions.

Rouhani, a Shia cleric, presided over negotiations with Britain, France and Germany that saw Iran agree to suspend uranium enrichment between 2003 and 2005. President Ahmadinejad reversed the course and restarted the enrichment activities after his election in 2005 that led to rounds of sanctions imposed against Iran by the U.N. and the West, including the more recent Western sanctions on oil and access to global banking.

Notable among Roohani’s supporters in today’s rally were Yasser and Fatemeh Hashemi, son and daughter of former president Hashemi Rafsanjani, indicating that the potential kingmaker in the upcoming election could be contemplating to support Rouhani’s candidacy, if he decides not to run himself. But it’s too early to draw definite conclusions based on Yasser and Fatemeh’s presence in today’s event.

Personally, I think Rasfanjani is a has-been. I don't see him as a "king maker" in the 2013 election.

Khamenei has already chosen for this man to "win".

If what you are saying is true, it would be a major shift of policy and major defeat for conservative factions who populate the Leadership House ('Beit Rahbari').

He wishes he was that way, Inside Iran groups and politics there are still many centers of power, That is why you see so much conflict...

There many conflicts inside the regime but they are all part of the same crew.

SEE MORE ON: Iran represents a deathblow to US global hegemony

By: Finian Cunningham, originally from Belfast, Ireland, was born in 1963. He is a prominent expert in international affairs.

*Sorry for off-topic for one more time!

Please stop posting off-topic articles. You can instead email them to us as your suggestions for important stories, like a number of other readers do. We will post them if they are within the scope of this blog. Thanks, as always.