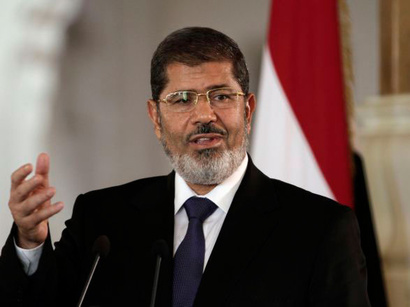 Egyptian President Mohamed Morsi has sent his personal envoys to Iran to discuss the establishment of a quartet to end the crisis in Syria, the Iranian media reported today. The quartet is to include Iran, Saudi Arabia, Turkey and Egypt. The envoys are Morsi's foreign relations advisor, Essam el-Haddad, and his chief of staff, Refaa al-Tahtawi.

Morsi first proposed the establishment of the quartet during a summit of the Organization of Islamic Cooperation in Mecca in August 2012. The Iranian, Egyptian, and Turkish presidents also met in Cairo on 6 February and called for the resolution to the Syrian crisis.

In a meeting in the Russian city of Sochi on 19 April, Morsi and Russian President Vladimir Putin expressed their support for an immediate ceasefire in Syria and the launch of talks between the government and the opposition to help end the crisis.

Great to see the two ancient Muslim nations coordinating their policies. Egypt and Iran have better relations than most realize and have similar regional goals. Welcome to our Egyptian brothers.

CAIRO — Egypt and Russia have agreed on nuclear energy cooperation.

Officials said the Kremlin agreed to help Egypt launch an ambitious
nuclear energy program over the next year. They said the program stipulated
a string of nuclear energy reactors, starting with a facility along the
coast of the Mediterranean Sea.

Officials said the Egyptian-Russian agreement was reached during the
visit to Moscow by Egyptian President Mohammed Morsi in mid-April. They said Morsi, who led a large delegation, discussed nuclear and other energy cooperation as well as ways to increase trade.

“There will be a Russian delegation to lay out the details of these
issues as soon as possible,” Egyptian Trade and Industry Minister Hatem
Saleh said.

Saleh said the first phase of the Egyptian nuclear program was the
development of the nation’s first nuclear energy reactor at Dabaa, near the
port city of Alexandria. He said Russia’s state-owned Rosatom would help
prepare Dabaa, stalled for more than 25 years amid a budget shortfall, local opposition and objections by the United States.

Egypt under the Morsi Islamist government is reorienting its foreign, defence and energy policies with more engagement with Russia, Iran and China.

A high level Egyptian delegation is also currently visiting Iran to discuss a range of issues including Syria and mutual cooperation.

How ironic that the very same countries (Turkey, Saudi Arabia + Qatar and Egypt at a later stage) were the ones that started/supported this intervention by sending in armed groups, concocted and orchestrated what basically amounts to a coup d'etat, are now back-tracking because the sovereign nation state of Syria won't budge.

Thousands of people killed, an entire nation laid in ruins, and now the realization that the foreign fighters (their own) from said countries can't get anywhere through violence and that they have to first lay down their weapons, go back to whence they came from, and then these parties can start talking referendums in Syria which might eventually lead to elections - the only lawful and true way (UN sanctioned) to gauge the will of the Syrian people as regards to who they want as their leader, and if they don't want Assad anymore, then he will walk away as he has promised.

I have posted about this very same issue time and time again before.

You are right as before. However, it was the US/Zionist agenda and usual miscalculation to weaken the "axis of resistance" while the Arab world was facing a color coded "Arab Spring". US calculation was that Assad was like Ghaddafi, Mobarek, Abdullah Saleh and Tunisia's dictator Zine El Abidine Ben Ali who all ran or were overthrown quite easily by rent a crowd and NATO bombing. Syria is a hard nut to crack as it is a very nationalistic state, complex demographically and with a battle tested military that will fight to the last.

US and its Zionist masters did not count on the tenacity of President Assad, the resolute performance of the Syrian military and the popular support the Assad regime enjoys at home. Syria also has very powerful international backers in Russia, China, Iran, India and most of the non-Zionist controlled "international community". The US in its infinite idiocy has created these Salafi terrorists who will eventually provide unimaginable blowback against the US and Zionists.

US/Zionist idiots are creating their own demise as events in the Maghreb are unraveling as the Salafi terrorists they supported are turning on their masters. As the adults have posted here before the BLOWBACK from Syria would make Libya and Afghanistan look like a kinder-garden picnic:

Exclusive: Diplomats warn that militants supported by NATO intervention are hitting targets in Tripoli and Libya as the US and French embassies and other interests have been targeted.

Diplomats are warning of growing Islamist violence against western targets in Libya as blowback from the French war in Mali, following last week's attack on the French embassy in Tripoli.

Diplomats say jihadists cross the Sahara to join cadres in Libya's eastern coastal cities of Benghazi and Derna. Police stations in both cities have been hit by bombings in the past few days, part of an insurgency that threatens to undermine the country's fragile new democracy. Chad's president, Idriss Déby, claimed at the weekend that Benghazi was now home to training camps for Chadian rebel fighters.

"From the perspective of an Islamist, it makes sense," said Dr Berny Sèbe, an expert on the Sahara region from Birmingham University. "If you are in northern Mali, the best thing that you can do is to make your way across Niger and then into southern Libya, where there is no state control."

at first HE thought it was easy and that the rats in Syria would overrun the Syrian army and install a 'democratic puppet' there.In fact Egypt has some elements among the rats .NOW it is downing on HIM and the West that the mountain is too steep to climb there!hence the need to Court IRAN.But Iran has many cards to play on the whole issue of Syria one among them is to arm some mujahedin to make trouble in Saudi Arabia!.this will make the stooges to behave there and force then to focus on the trouble at home and stop the funding to the rats!.

but that will not happen as the noble Nation of IRAN is not at war with anyone!!.