Rate of Economic Growth in Iran Drops to Zero 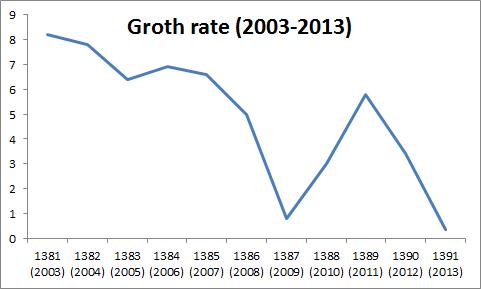 Hojatoleslam Qolam-Reza Mesbahi Moqadam, chairman of Majlis Budget Reconciliation Committee, said today in Tehran that the rate of economic growth in Iran has dropped to zero. Mesbahi Moqadam made the comments at a meeting of Iran’s Chamber of Commerce, Industries and Mines. (ILNA, 7 April)
Mesbahi Moqadam also said that in its budget for the current Iranian calendar year (starting 21 March), the government has proposed a single rate for foreign exchange closer to the open market rate. Under the proposal, the preferred rate of exchange for basic goods and medicine will be replaced by a government subsidy that approximates the difference in costs based on the current preferred rate (12,260 rials to a dollar) and the market rate (close to 35,000 rials to a dollar).

The proposed budget also estimates oil exports at 1.3 million barrels a day, a drop from last year’s budget of 2.7 million bpd. The price for each barrel of oil is also budgeted at $95.

One more time: Iran has put in place a multiple exchange rate system as a counter-measure against the economic war being applied against it. These are as follows:

Incidentally, Professor Djavad Salehi-Isfahani has been assuming a zero growth rate and approximately 35 percent inflation rate for some time now, at least as far back as the second half of 2012, which serves to demonstrate the reliability of his observations and analyses. Such neutral experts on Iran-related matters are both scarce and much needed for providing accuracy in any discussion of Iran.

Oh, and by the way there is a misspelling in that graph. It should read "Growth" not "Groth".

And one more time: the multiple exchange rate is the main source of corruption in Iran. The in crowd with strong ties to officialdom is allowed to import basic goods and medicine at the preferred rate and sell them in the market at prices calculated based on the open market rate, making millions of dollars just because of differentiations in official rates. Now the government is proposing to end the practice and initiate a single currency rate, with direct subsidies to keep the prices of basic goods and medicine affordable to citizens. That’s a very rational approach and the Majlis should pass it, if the special interest allows it.

petty, Pyruz, to publish that carp.

The graph was by iraniansight.com and I did not want to change any words or add anything to it. On its content, the numbers through 2012 are the official figures by the Iranian government. The perdition for 2013 was theirs, but they were more optimistic than what it turned out.

Mark can you move to iran and give us firsthand reporting of their economy?

Of course not because like most iranians you have the credibility of a rug salesman.

The truth is likely far far worst than zero growth, but you'll never hear the truth because iran and its culture are dishonest. Lie lie lie.

Mr Uskowi ,
I beg to differ on this matter,
True ,that Iranians are under austerity and pressure at the moment .
I also agree with your assertions that it is partly caused by Ahmadinejad's mismanagement on a macroeconomic level but so are the Greek or Cypriot or Iberian administrations .
What you fail to acknowledge here is the effects of the unjustified sanctions imposed on Iranians by some western countries.
under any circumstances imposing economic sanction on any country is an act of war and as an Iranian ,it is more normal for one to see the countries imposing such measures as belligerent nations.
how you do not see them hostile and how you are not angry at their hostility is a point I do ponder on many times.
in fact I tend to believe our generation's hostility towards the current system in Iran is so high that some of us want them to fail forgetting that with their failure so many Iranians may suffer .
Remember Ahmad Chalabi !he achieved his goal of Baathist failure but a great number of Iraqi's suffered on the process and he has part of the blame.

I don’t disagree with you. Sanctions are the major factor in the decline of the Iranian economy, and I do support, and always have supported a compromise between Iran and the West that would lead to lifting of all sanctions, beginning with oil and banking sanctions.

Did mismanagement of Ahmadinejad government was also a major factor? I believe so. His subsidy reform program as originally thought of was a brilliant idea. But under political pressure he turned populist and destroyed his own reforms by handing out cash in billions of dollars annually, and help creating an inflation that the government says is at 31%, but if imported goods are added to the basket, which they should be, the rate is some ten percent higher.

Ahmadinejad’s proposal for reinstituting a single currency exchange rate is however a sound proposal and I hope the Majlis will approve it during its current budgetary deliberations. To lessen the impacts on the poor, direct subsidies would replace exchange rate manipulation, which has been a biggest factor in corruption in the country.

but as the runways for the planes are on aircraft carriers and other places far, far beyond the reach of the little swine, you're pretty much deluded and silly.

Yes, the "Shahab", the "Sejil" and all the other super-duper IRI weapons, including the APM (Advanced Photoshopped Missile) are going to destroy the Great Satan! Oh, yeah!

Dear Mr Uskowi ,
I'm glad we are the same page here ,and thank you for clarifying that .
to answer your question,I should say yes !
direct expending of petro-dollars in an economy is a double edged sword ,a dangerous mistake perpetrated by our dear old A-N ,
you see once you have high petro-income that income should be converted into local currency in which way it would translate into huge imports from foreign suppliers of bits and bobs destroying the local industries and inflating the inflation balloon.
The governments of Iran regardless of what administration in office , have done the same
i.e Shah expending Billions on his modernization projects or Ahmadinejhad for his populist projects Mehr-e-madegar or cash handouts. there is no question about it.
on the other hand once your petro-dollar income deflates you need to borrow money from the central bank which in turn would threefold the amount of cash-flow in your economy and this would mean ,High inflation rate again.
This is an inherent characteristic of Iranian economy and very well known by Iran adversaries,
it is the very same reason US has twice been using it to curb Iranian natural tendency for independent policy making .
to better explain what i mean by mentioning "twice" I should point out the
mid 70's petroleum price crash perpetrated secretly by KSA-USA secretive collaboration which some analysts view it as the prelude to Iranian Social unrest and eventually toppling the regime in 1979 and for the second time the current unilateral sanctions of petroleum exports and Iranian Banking sector by US and EU countries. Which so far have not created unrest in the country but eventually will.
knowing this trait the Iranian fiscal planners drafted the 5 year development plans in the 90's to gradually remove this Achilles heal of Iranian Economy .
under fifth development plan ,Mr A-N's administration was supposed to divert 20 percent of the oil income to the development fund with the mandate to increase the percentage by 5 percent annually ,Had he done that Iran would have had a sovereign fund of approximately 400 billion USD by Now .Making the current overtures by Europeans and the Americans futile.
I'm sure you would agree me that he is to blame ,I for one did not vote for him for the very same reason and tried to choose a candidate with a better understanding of economy (not the green candidates)
But what can I do now ?he was elected president .
from my perspective he is only second to blame for the hardship Iranians are experiencing the first to blame is the belligerent nations who have imposed those sanctions on us unilaterally .
but I am only one person ,you do not have to agree with me 100%.