Iran to Insist on Enrichment Right at Almaty II 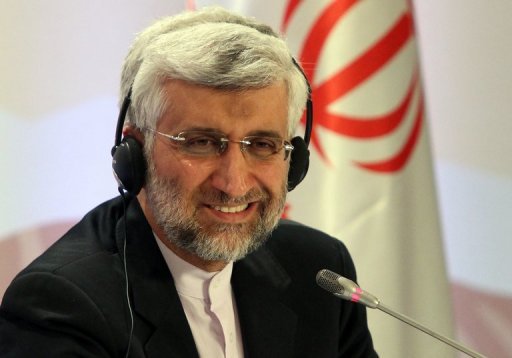 Iran's chief nuclear negotiator Saeed Jalili in Almaty today for the talks with major world powers said the P5+1 had to recognize Iran's right to a nuclear program to see any breakthrough.

“We think our talks tomorrow can go forward with one word. That is the acceptance of the rights of Iran, particularly the right to enrichment,” Jalili said. (Reuters, 4 April)

“We hope that in Almaty, they do not repeat the bitter experience they have gone through in the 34 years of our revolution and that they make the right conclusion this spring,” Jalili added, referring to Iran’s relations with the West since the 1979 Islamic revolution. (AFP, 4 April)

The talks are due to start on Friday and last through Saturday. During the last talks in Almaty in February, the P5+1 presented Iran with a proposal to ease some sanctions in exchange for Iran’s suspension of 20-percent uranium enrichment, closure of Fordo enrichment unit and acceptance of IAEA additional protocols. Iran regards the concession by the West too little and disproportional to their demands, and wants them instead the end to all sanctions, especially those affecting the oil and banking sectors.

On the recognition of Iran’s right to enrich uranium, the two sides can reach consensus much easier than Jalili tends to suggest. The West, including President Obama, has already accepted Iran’s right to a peaceful nuclear program. The issues to be worked out in Almaty are the enrichment beyond what is needed for the country’s future power plants and its medical research, as well as the kind of access IAEA would have to Iran’s nuclear sites.
File photo: Iran's top nuclear negotiator Saeed Jalili in Almaty after talks on February 27, 2013 (AFP)
Posted by Nader Uskowi at 9:53 AM

As I've said many times before, Iran's position in nuclear talks is easy to predict:

It really is that easy.

Of course the devil is in details of a compromise between the two sides. That’s why Almaty II can be the start of a real dialogue on specific issues, hoping to carve out a compromise in near future. Some of the issues:
20 percent LEU: Does Iran already possess the 20-percent enriched fuel it needs for its medical research? What will happen to the access uranium, if any? Transferred abroad, where?
Fordo: does Iran continue to enrich uranium there, if so is it going to be limited to 3.5 percent grade?
Full nuclear fuel cycle: limited to producing 3.5 percent grade? Any limits on the quantity based on the number of power reactors Iran is operating?
Supervision: defining the mission of IAEA inspectors after the compromise.

The 20% is either converted into fuel assemblies for the trr or down blended into 3.5%,fordow continues to operate producing 3.5% it is irans guarantee that in the event of any usraeli treachery ie a military strike on natanz it can quickly reconstitute its program or build a bomb which ever the case maybe,as for 3.5% there would be no limits on production,the iaea would keep doing its job,though so long as amano is director there will no doubt continue to be problems of his making.As you can see the problem is not in the details its in the west agreeing to a reasonable deal in the first place thats the hard part the west just cant seem to say yes

He Saeed, you got a dark spot on your forehead! I've heard its a sign of rationality.

Iran would not want to go back to below twenty percent. And why should they? They are already under heavy sanctions. What they should really be barganing for is to not drop out of npt and building a bomb in exchange for full diplomatic relations.

GENTLEMEN READ MY LIPS: These talks have no future and will not result in any deal. The Zionists and their US poodles have no interest in removing sanctions or working out a modus-vivendi with Iran. These talks are a smokescreen and Iran should stand-firm and let the chips fall where they will.

As I've said,
what should be a deadline for the end all sanctions imposed on Iran during Obama's administrations ?.

Are there any new additional conditions related to that deadline to end all the sanctions imposed during Obama's tenure ?.

P.S.
I see that president Uskowi and his staff, use to delay for couple days and delete significant part (about 1/2) of my longer comments and it may be happens to others on this blog as well. He, Uskowi has pretended that my comments are not related to articles, as a his justification.
Since Uskowi spells Us and Zionists' wishes, my comments use to compare Uskowi's arguments to the Us events and related standards - that he recommends as the ones, for Iran and apparently for the rest of the world.

ISRAEL IS A nuclear criminal on the loose!!

- -You have to pity the Iranian officials for their endless efforts to convince someone in this world that the noble Nation of Iran does not need nuclear arms!.many people guess that it will take a whole century for IRAN and the world powers that may be to reach a compromise on that issue!.The latest round of talks coming on the heels of a statement by the leader of the IAEA ,who is supposed to be a neutral figure by his job description has issued his concerns allaying his fears that in fact Iran might be having a secret nuclear program!!.imagine a person of his stature playing politics on an issue affecting millions of citizens .
this is the world we live in!.Now did you know that Israel has been abusing its position as the regions sole nuclear nation,going further to commit nuclear proliferation ,sharing nuclear technology to a rogue state since 1970 WHILE THE US LOOKED on!..YOU HAVE TO READ this shocker for yourself in the GLOBALIST-a report by Dereck Leebaert-titled:"Israel share nuclear capabilities with a rogue state". -appearing on Friday -05 -2013.

Why did the US allow Israel to commit this heinous crime that endangered humanity without doing anything but instead rewarded the Jewish state with grants and more cooperation!.

@QUESTION TWO-
why is Israel allowed to endanger the live of Iranian citizens by unleashing viruses on an approved civilian nuclear program.-

it has been said recently here that LEADER Kamenei has threatened Israel by suggesting that Iran might raze cities during a conflict-many pretenders alluded to the fact that HE the Leader is plying a mass murderer for imagining to kill innocent civilians!-AND YOU CAN NOT BEAT PRETENDERS in twisting facts to score some penalties! ,by a methodical word twisting and shifting facts ISRAEL was absolved and Iran was seen as the most threatening Nation!-
@well unleashing virus that are meant to cause disruption or ignite fires is not putting a threat into practice on the part of ISRAEL! @bombing nuclear facilities and causing a doomsday catastrophic damage in the country and the region, killing millions of people at ago is again fine to our pretenders ! -because a nuclear facility is a military target!.

@QUESTION THREE-
so why is Israel allowed to posses nuclear arms, go ahead share technology with rogue states,threaten some nations pursuing civilian nuclear technology,killing innocent scientists,planting agents all over to sell faulty nuclear materials all in the aim of sabotaging a peaceful nuclear program AND YET ALL THESE PRACTICES endanger the lives of millions of people in a Nation!.

surely time is up for a new just world order!!.

Dream on. Iran is a tiny toilet of scountry with a big mouth and they are being put in their place. The next round of sanctions will come then like cutting off welfare from a bum.

generally iranians need to stop deluding themselves. You're a low level third world people who lie lie lie thinking you fool others while making a fool of yourselves

The whole world should seriously stick to the note,"Don't force IRAN into making ones, instead."

Thanks for your courage B.M.A.,israel is allowed, because it has been controlling its servants.

At the begining, the present land of the US was essentially an England's colony, and today its true status is a "well kept" secret...,and the us pays the most for those who control it from outside.

Anonymous April 5, 2013 at 8:35 AM
Are you sure you`re not describing apartheid israel,that description of a "tiny toilet of a country with a big mouth" fits it to a T,iran by comparison is the economic powerhouse of the middle east with a prosperous and diversified economy that is the envy of the arab puppet states who can only pump oil and have to import everything else from matches to cars and those that have no oil are on the american dole their militaries and corrupt despots propped up by american money and weapons just like israel

nope, 8:28, it's you who are delusional. Iran isn't a powerhouse in the ME in any way, shape, or form.... It's main claim to renown is as a powerful exporter of noisome religious/political fundamentalism and of terrorism.... and even in that, it's outstripped by the Saudis.

as well the Saudis export income dwarfs that of Iran, being about 4 times greater.

heck, Turkey is even far more of an economic powerhouse than the pestilential Ayatollah-ridden regime mismanaging Iran.

Yeah so is saudi imports and its gross external debt,iran ranks 17th in the list of countries by gdp saudi is ranked 22nd,irans gdp is over a third greater,iran is also a member of the next eleven saudi is not,perhaps when the saudis have the sort of idustrial capabilities iran has then your saudi friends might have something to crow about,perhaps when they can build cars instead of importing them from europe or iran

The dark spot is caused by a hot stone so that they could claim they are pious :o)

8:35AM Anon, the next of your anticipated sanctions will face the options for the Majlis to withdraw or suspend Iran's membership in the NPT, like it was stated by the Chairman of the National Security and Foreign policy Commision of Majlis, Alaeddin Boroujerdi.