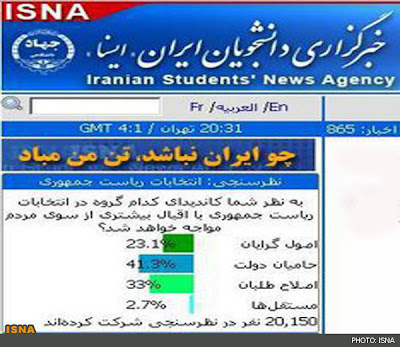 Iran’s semi-official news agency ISNA said its first public opinion poll for the upcoming presidential election shows the supporters of Ahmadinejad administration, referred to as “deviationists” by the right, enjoy 41.3 percent of popular support, followed by reformists at 33 percent. The “principlists,” an assortment of traditional conservatives and ultraconservatives, trail in the third place with 23.1 percent of the votes.

ISNA said the poll was conducted in two days involving 20,150 respondents. ISNA added that its survey shows a very large percentage of people will participate in the election to choose their president. The first round will be held on 14 June.

Photo credit: ISNA’s results of its public opinion poll, April 2013.
Posted by Nader Uskowi at 1:30 AM

There is no such thing as a public opinion in Islamic occupied Iran.

The bullspit propaganda machine has started.They are trying to get the people excited again so that they come out into the streets in small numbers and then the regime can clobber them.But in reality the regime knows if the people come out in mass it would be the end of them.The regime likes small controlled demolitions of its opponents.

Unfortunately it's another poll without a published methodology (the Tehran University polls publish theirs).

Still, it's an indicator of sorts, depicting a decline in Ahmadinejad's popularity from the roughly 62% he enjoyed in 2009/2010 to that of just above 40% today.

Interesting that the reformists' percentage has remained fairly constant from 2009/2010, still representing a 1:3 minority.

The real numbers in free election

Forget about reformists. They have lost the glance they once had. Nationalism dominated the spectrum nowadays.

This is not a popularity poll on individual candidates, as the list of candidates is not yet officially announced, but a measure of popularity of the three broad groupings as defined by ISNA. Ahmadinejad is barred from a third consecutive term, and he’s pushing Mashaie instead. It’s doubtful if the Guardian Council, dominated by the conservatives, would allow his candidacy, but if they did and based on these numbers by ISNA, he and the candidate of the reformist/moderate camp could advance to the second round.

Long way to go to the election, the people are just starting to pay serious attention to the election and the polls could change, as we get closer to 14 June. But these numbers are the first empirical indications that the ultraconservative camp, led by Mesbah Yazdi, and the traditional conservatives, thought of as the main supporters of Khamenei, are not doing well; combined they could poll some 20 percent. An interesting election ahead of us!

In a free election :o)

Accoding to the Public Opinion Poll, I think, the current president Mahmoud Ahmadinejad of IRAN, is still popular in the eyes of most iranians with which indicates that he is possibly the most suitable candidate for the coming presidential election. Perhaps, the most popular(if not the best) president in the whole region of the Middle East and a half of the world(if not of the whole planets).

Do you live on this planet at all ?

things will dramatically change when all candidates hit the campaign trail!!.

In Khamenei's favor of course :o)

If I were you, I wouldn't bet on it. Iranian politics is very complicated; we need to watch developments in these two months closely.

What's so complicated about it? You have a top mullah sitting on the pulpit surrounded by his worshipers and giving orders in the name of Allah to his henchmen to squash any opposition to the regime. Khamenei choose Ahmadinejad just like he will chose some other glove puppet to act as "president".
Once you see things for what they are then you know how to deal with it :o)

@5:52 PM,
The future for you is very certain, you have no doubts on what will happen, nothing complicated, everything developing as planned and ordered. The question might arise why do you then follow current developments or read polls like this one. They can't help you with your understanding of the current politics. Waste of time for you, isn’t it?

No,I wouldn't say it's a waste of time.But it can be a little frustrating at times knowing what you know to be true.You have to study the psychology of these people to understand what they are thinking about or the acts they are about to commit.

The poll, if accurate, shows that the story of a fraudulent election in 2009 was nothing but fiction.

Trolls&CO making own polling
that is hier my poll for the next president
1: 100%
every body else : 0%

Ahmadinejad and Mashaei- helped by him, have sufficient credentials and knowledge to lead the nation and possess a significant support.

The key point is that all factions operate within the realm of the Islamic Republic and the "differences" amongst them are merely in social outlook and not much politically as the key fundamentals of the 1979 popular revolution still stand. Most Iranians will prefer stability than the nutty behavior of Ahmadinejad faction which is now mostly marginalized within nominal IRI factions. I predict a stable establishment figure as the next President and more unity and cohesion in government policy. I heard Ahmadinejad's address to the patriotic and nationalistic Iranians in NY a few years ago and the man was as complete nut, I am sure the next President would at least be sane.

Only the pulpit leads the regime.The rest are just chaff.

Yes khameini,we know the "votes" will end up in the dustbin and you have already decided who will be the next president,LOL!

Anon 9:55PM, in the us propaganda machine and an american political circus starts several times earlier than in Iran...
In the US they have wasted over one billion on their presidential election "show".

In Iran all candidates are selected by public voting not by artificial vetting of caucauses, primaries or delegates.

If someone would argue that Iranian vetting eliminates political opponents, I will respond that in the Us those who would like to overthrow system or let it happen, will not even have chances to think about that.

So Mark doesn't believe that that 62% support for Ahmadinejad in 2009 was a fake and hoax invented by "the regime"...... or he (Mark) means something different??

Uskowi says that ahead is an interesting election.

Does Uskowi mean that that election in "a totalitarian regime", as described by his friends, has a meaning, merits and legitimacy ???