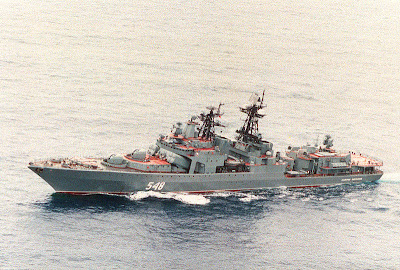 A group of three Russian Navy warships has docked at Bandar Abbas, the Iranian port city at the Strait of Hormuz. The task force is comprised of Udaloy-class anti-submarine destroyer Admiral Panteleyev (548), and the replenishment ships Peresvet and Admiral Novelskoy. The ships arrived at Bandar Abbas on Sunday after a long journey through the Pacific Ocean. (Mehr News Agency, 21 April)

Last December, the Russian destroyer Marshal Shaposhnikov (543) became the first Russian naval ship to dock at an Iranian port in more than 40 years.

Welcome to our Russian cousins. It is time Russia take Iran and Persian Gulf security seriously as US/Zionist hyenas try to encircle Russia and China by destabilizing the region and Syria by flooding the region with weaponry. Russia needs to strengthen defence cooperation with Iran and supply modern weapons as the S-400, Sukhoi 34 and frigates and subs. The US is extorting the puny Persian Gulf pimpdoms and Saudi stooges to buy $100 billion worth of sub-standard US weapons and supplying the Salafi terrorists in Syria with another $150 million worth of night vision equipment, armour and kevlar, albeit most of the weapons and equipment supplied to the Syrian Salafi cutthroats will end up in government hands or will be sold in the arms bazaars of Af-pak and Caucuses. Iran will probably inherit most of the US supplied night-vision equipment like the stingers supplied to the Afghan alCIAda jihadis in the 80's. US is in for an endless Jihadi blowback by these idiotic policies. In any case increasing military cooperation with Russia is very good for both nations and Putin is strategically quite astute.

Yeah the Russians are our "cousins". Will our "cousins" give back the vast tracks of land that they have stolen from Iran when they were expanding their empire?
At least the US helped Iran to regain Azarbaijan back from the grip of Stalin after WW2.You're are so full of hate it has made you bigoted.

How about we ask for Libya's return to Iran as well? We used to rule over parts of Egypt and Libya during Koorosh e bozorg. Now, let's have them back.

Your tiny brain is incapable of understanding what difference time makes. Except for the Ashkenazi Zionist regime and the colonial American forces with their forts all around the world, no one is grabbing land from other sovereignties. Hate does make people bigoted but more than that does a selective blindness.

Looks like you are full of misplaced hate and bigotry.Russia was occupying northern Iran until the mid 1940s or is your tiny little head full of chalk? Funny isn't it when traitors like you say it doesn't matter if Iran has lost land to the Russian empire but makes a big deal about Jews getting their historic nation back and calls those people hateful and spiteful names.

I'm sure the British did not take Herat (which used to be Capital of Iran) away from us and during WWI did not occupy Iran and was partially responsible for death and famine of more than 9 million Persians or took Reza Shah away from Iran?

The point is none of these powers are to be trusted.

The article contains incvorrect information, because cited ships Peresvet and Admiral Novelskoy are not replenishment ships, instead they are big armed amphibious assault ships, which carry Russian marines and their equipment.

In addition to those three warships, an oceanic tug and additional tanker should enter Bandar Abbas too.

To your info that Putin is strategically quite astute, I would like to mention that at the time of this comment, Russian military Chief of Staff Gen. V. Gerasimov has been visiting Nicaragua....