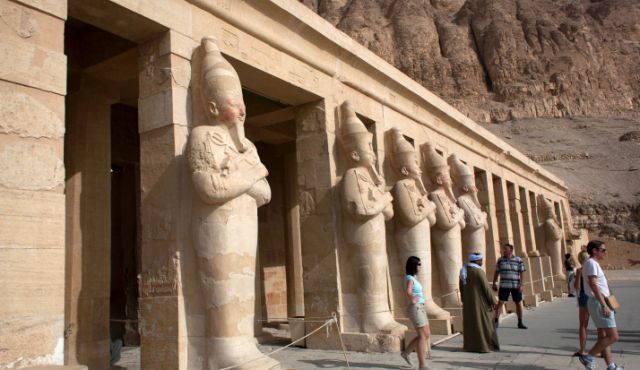 More than 50 Iranian tourists arrived in the ancient city of Luxor on Monday as part of a rare visit that showcases the warming ties between the two countries since President Mohammed Morsi came to power last year. A new bilateral deal was signed recently to promote tourism between the two countries. Iran on its part has unilaterally waived visa requirements for Egyptian tourists. (AP, 2 April)

However, some sparks flew over the visit. The Egyptian government attempted to regulate the places Iranians can visit. Tourism Minister Hesham Zaazou wants Iranian tourists to only be allowed to visit ancient cities and Red Sea resorts like Sharm el-Sheikh, while keeping them away from religious sites, especially mosques affiliated with Prophet Mohamed’s family. Cairo has also been declared off limit to the Iranian tourists. The Iranian officials, however, want the tourists be allowed into sites throughout the country without restrictions.

“Iranian tourists have the right to visit whatever places they want in Egypt. We shouldn’t intervene in programs [created] by Egyptian and Iranian tourist companies,” said Mojtaba Amani, Iranian Charge d’affaires in Cairo. An Iranian deputy foreign minister visiting the country also said in a news conference in Cairo on Monday that tourists from Iran don't have a religious agenda and that they are coming to Egypt to support its economy. (Egypt Independent, 2 April)

The group visiting Luxor today came in a tourist boat down the Nile from the southern city of Aswan, where they had arrived two days earlier on a charter plane originating from Tehran, the first commercial flight between the two countries since the 1979 revolution. Today, they are visiting ancient sites in the city, including the famed open-air Karnak Temple and the Valley of the Kings where Tutankhamen's tomb lies.

File photo: Foreign tourists visit the Hatshepsut Temple, in the ancient city of Luxor, southern Egypt. (AP)
Posted by Nader Uskowi at 9:49 AM

The ties aren't warming enough, because the Iranian tourists will be contained to specific areas, in order to control their "influences" on the "religious" and other part of Egypt's society.

There in undoubtedly growing Egypt-Iran axis on various fronts as the Egyptians resent Turkish interference in Arab affairs, particularly in Syria as Mprsi amply demonstrated at the recent Arab League circus and clown-show. In an unprecedented show of support for Iranian position, President Morsi and the new Egyptian Foreign Minister Mohamed Kamel Amr praised Iran for its efforts to find a political solution to the Syrian Crisis, and underlined the need for cooperation with Tehran to help bring back peace to the Muslim country. Egypt is also looking to strengthen its defence and security relationship with Iran. Most Egyptians, particularly the educated youth see Iran and its progress, independence and self-sufficiency as a role model for the Muslim world. Iran's soft-power and consistent positions are gaining huge support across the region.

On a connected issue, China and Russia and even India and Brazil are increasingly at odds with US puppets at the P5+1 stooge meet (the US, Britain, France, plus Germany) on the eve of talks with Iran over the Islamic Republic's nuclear program, according to Javier Solana, the ex-EU chief. The European Union's former top foreign policy official says fears of a spike in energy prices, loss of lucrative trade, diminishing US influence, tensions in the Korean peninsula and above all Russia and China's complete rejection of US/NATO support for FSA terrorists in Syria has greatly strengthened Iran's position. Syria is a red-line for both Iran and Russia who are acting in increasing concert on most global issues.

Syria was so important to Iran, he went on, that he did not think it possible to reach an agreement on Iran's nuclear program without also addressing Syria.

But Syria is not the only issue, he added, noting that at the so-called BRICS summit last week in South Africa, the leaders of Brazil, Russia, India, China and the host country, who have historically confined their statements to economic issues, jointly expressed growing concern about "threats of military action as well as unilateral sanctions" against Iran and urged all "disagreements with Tehran to be resolved by political and diplomatic means" alone. It appears that most of the world is falling in line behind Tehran against a dwindling minority of mostly toothless US puppet states in a Asian dominated new world order. China, India and all the emerging world powers are increasing their energy imports and trade with Iran, the regional energy superpower.

WOW! ...you can't travel to Cairo as an Iranian no matter where in the world you reside? You gotta be kidding me...that's like something out of the SA apartheid textbook.

The Egyptians resent fascist Islamic interference in Arab affairs from Iran even more than Turkish interference.Assad will get his ass whooped and his regime will collapse despite the "red line" drawn by the occupying regime in Tehran.
So go and grab some cool aid :o)

I second that and i do understand your dismay of the realities - namely that state sponsored racism and entire classification of whole ethnicities still happen in todays modern world. Which Irani would enjoy going on vacation to a country who considers Iranis to be second-grade people and looked down on. It's a waste of money, time and energy if you ask me...who knows...maybe these 50 Iranis were gathered and handpicked by the regime for this "PR-trip"?

All within the framework of the Islamic fascist turdocracy.