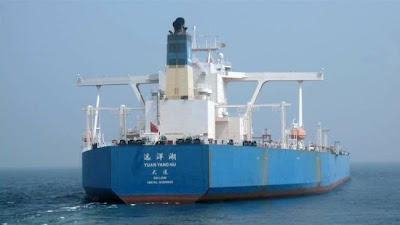 A Chinese supertanker with the capacity to carry two million barrels of crude has docked at an Iranian port, the Iranian media confirmed today. Bloomberg on Wednesday a report by HIS Fairplay, a British maritime research group, that the Chinese supertanker was seen at Kharg Island, Iran’s largest export terminal, on 21 March.

The visit is the first by a Chinese supertanker to Kharg since July when the EU imposed a ban on insuring tankers carrying Iranian crude.  Since then, the Chinese have depended on National Iranian Tanker Company (NITC) for the delivery of Iran’s crude oil to its refineries. (Press TV, 7 April)

Yet another prediction of the Leveretts to be realized. This, the product of reliable observation and analysis so scarce in reportage on the Islamic Republic of Iran.

Chinese oil imports from Iran are increasing dramatically and we will see more of these supertankers and naval visits soon. India is also signing the Chah-bahar transit agreement that will see Iran as the main overland route to Central Asian markets. IMF estimates for Iranian revenue,tariffs and local economic development in the region are in excess of $5 billion annually.

And what’s your source for the dramatic increase in Chines imports? For the last twelve-month period, their imports have actually decreased, if not dramatically but rather significantly.

And which of their predictions does this post confirm? The report here by Press TV said the Chinese supertanker was loading Iranian crude that was previously done by Iran’s own supertankers. Did Leveretts predict that?

The Chinese are helping themselves with some free oil in return for some Chinese junk and their support in the UN.
Iran is paying them in blood money.

Iranians, a third world incompetent group of liars whose only export is something under their feet.

No thats your good friend and ally saudi arabia

The government of Iran has now proposed a budget based on 1.3 million bpd in oil exports (as opposed to 2.7 million bpd last year). The government probably has not read your sources that the Chinese have dramatically increased the oil imports from Iran! Or you probably read the Chinese report wrong, it was Saudi Arabia perhaps.

Open your eyes and even read the Zionist WSJ bebe joon. Why do want to act like an ostrich just because of simplistic Iran-hate?

A recent IEA report shows that China's February crude oil imports from the Islamic Republic of Iran have increased by more than eighty percent compared to the corresponding period last year.

Earlier this month, China's biggest refiner announced that it will process more Iranian crude oil at its second-largest plant in 2013 than in 2012. China and India have greatly increased dependency on Iranian oil and are undertaking insurance coverage and large storage for increasing imports.

"We have followed the government's requirement to maximize our import volume from Iran (this year)," Yu Xizhi, president of Sinopec Maoming Petrochemical Corp, said.

"After all, China and Iran enjoy good relations," he noted.

The above is actually a straight cut-and-paste job from Islamist Terrorist TV (aka Press TV). Check out the link below. What is it about West-residing IRI Groupies and the truth? They just don't go together, do they?

1 "Anonymous" argues with another "Anonymous" how convenient to hide your worthless opinions. Try some civil, intellectual dialogue that will facilitate a meaningful discussion or continue to not exist.