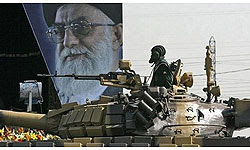 Iranian Army announced today that it will unveil and test new indigenous weapons and military hardware during eight “massive” wargames planned for the current Iranian calendar year that started on 21 March. The first of these wargames will take place on 24 May to test in Isfahan province. The exercises are structured to test Army’s capabilities in asymmetric warfare.

Some of the new Iranian battlefield systems are being battle tested and proving to be marvels. Imagine what they will do in Hezbollah's blessed hands.

The pride of the great nation of Islamic Republic of IRAN's indigenous owned-classes of latest weapons and military hardware.

The "new weapon systems" will consist of beefed up T59 tanks and some updated WW2 Russian antiaircraft guns.Iran is fully equipped to fight a 1959 style war.Indeed the battlefield systems are true "marvels" of technology.

Dream on. Iran is focused on asymmetrical warfare as Afghans armed with nothing heavier than a RPG or 106mm RR have showed how to defeat the cowardly "hi-tech" US military that drops bombs on civilians and runs. You anti-Iran ranters really need to get out and travel a bit.

believe the IRANIAN general when He says IRAN has lethal arms!!.

Since you claim we are "anti-Iran" prove to us you are even Iranian or are you one of those couch potato eating anti US/Western hypocrites who hates anything about the US and the West and supports any country that is supposed to "stand up" to the West? In other words you don't give a toss if Iran perishers as long as it serves your deluded and hateful agenda against the so called "imperialists".

Silly lollipop boy! Iran will hardly "perish" as it has been around for over 3000 years, however, the United Snakes built on genocide, greed, slavery and massive land theft of native Americans and Mexicans will unravel and destroy itself with hate, warmongering, racism, gun violence, Zionist scams, gun violence, Islamophobia and total lies. Since you can barely write or read, there is no point telling you to read some contemporary books like Untied States of America by Juan Enriquez the Harvard demographer or the

The Decline of America

With sustained high unemployment, mounting national debt, imploding society, and legislative gridlock in Washington, the world's once most powerful nation is not in the midst of its finest hour but in irreversible decline.

As China and other emerging powers rise on the international stage, and uprisings in the Arab world continue to test the limits of U.S. foreign policy, the age of American global dominance is ending. Over a decade of lost wars have indebted the shrinking economy and created a social and fiscal morass.

In The Reckoning: Debt, Democracy, and the Future of American Power, Moran offers a glimpse of a world in which the U.S. is no longer an economic and military giant but a rapidly declining power being relegated to the margins and presents advice to American leaders to help them navigate the transition to a more modest global role.

Iran will unveil S-300 in a few months. Looks like the issues with Russians have been sorted out. nudge, nudge, wink, wink.....

The manufacturing of the Iranian S-300 system is underway and its subsystems have been already tested, adding that Bavar-373 missile system is projected to be unveiled in 2014.

Under a contract signed in 2007, Russia was required to provide Iran with at least five S-300 defense systems.

The decline of America is the greater part of your delusions followed by your silly paranoia with "Zionism". I've asked this question as regards your obsession with lollipops from you before and you have declined to answer.
Has it anything to do with being under the mullahs abah whilst "training" on the job?

and the Russians took the money and refused to deliver them.

Iran hasn't the ability to manufacture anything comparable.... and any crap unveiled in a few months will be space monkey quality.

And as before,welded barrels on parade.