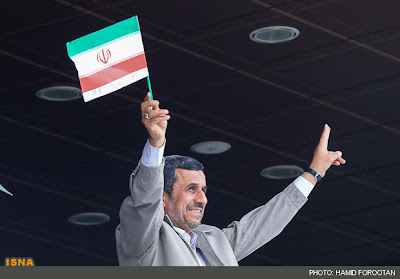 The long anticipated Ahmadinejad/Mashaei gathering at Azadi Stadium did not happen as advertised. Mashaie was absent at today “rally” that was expected to be the unofficial start of his presidential campaign. President Ahmadinejad did attend the half-empty stadium and the program did not have significant political content. Instead Ahmadinejad thanked government workers for their efforts in ensuring that the new year celebrations which stared on 21 March and high-volume travels throughout the country during the two-week holiday that ensued went smoothly.

Mashaie’s absence and instead the presence of Ali Nikzad, the minister of transportation who has already declared his candidacy, could be seen that Ahmadinejad supporters believe that Mashaie’s candidacy could be rejected by the Guardian Council and Nikzad could end up being the standard bearer for the group in the June election.

the political situation is still too fluid to handle ! however as clock ticks closer,it will be easy to predict something!

High participation of people in the Iranian election; higher than in the US, and lack of major disturbances, will be another important victory for the Iranian nation, regardless who will become the next president.

It will be also significant defeat for the adversaries of the Islamic Republic.

An American commentator says that the Americans are increasingly coming to the understanding that statements by leader of the Islamic Revolution are more truthful and honest than those of their own leaders.

It is true the US is committing terrorism all over the world and ironically enough many of these terrorist attacks, drone attacks, bombings, some of them false flag events, these are very, very similar to what happened in Boston.

*Press TV has conducted an interview with Dr. Kevin Barrett, with the Muslim-Jewish-Christian Alliance from Madison to shed more light on the issue.